Illinois defeats Iowa in Champaign for first time this year 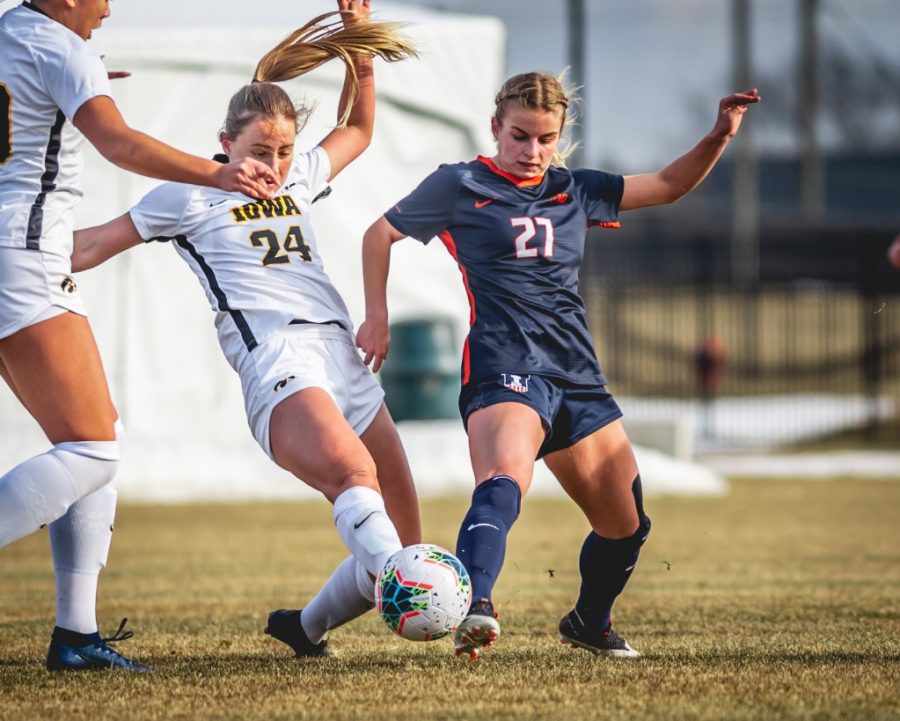 Senior Maggie Hillman battles for control of the ball during the game against Iowa on Thursday. The Illini won 3-0.

Playing at an almost-finished Demirjian Park in 45-degree weather after a wicked snowstorm, the Illinois soccer team towered over the Iowa Hawkeyes 3-0.

Goals from defender Kendra Pasquale and forward Summer Garrison put the Illini up on top.

A week after their first game against Purdue, Illinois head coach Janet Rayfield saw improvement among the team.

“I thought we did a better job defending higher up the field,” Rayfield said. “Our ability to get around them on the flank and get serves across the box, we had a couple really dangerous opportunities where we played balls across the box.”

Rayfield went into the game with the same lineup against Purdue but took out defender Henar Urteaga for midfielder Eileen Murphy.

The Illini started off hot during the match, keeping the attack and pressure high with Iowa on its toes. Within the first 12 minutes of the game, they were able to get two shots off from forward Makena Silber and defender Ashley Cathro to test Iowa goalkeeper Monica Wilhelm.

In the 30th minute, Garrison got a pass from Pasquale in the middle and dribbled towards the goal. Fighting off two defenders, she gets a shot off that bounces right in front of the Iowa keeper to fly over her into the goal, earning the first career goal of her career for Illinois.

By the end of the first half, the Illini were on the attack again going down the right side. A pass was sent to Pasquale in the box and took a huge touch to get past her defender for an open shot. The shot rolled into the far right post scoring the second goal of the game.

Although going 2-0 into halftime, the Illini struggled to connect with each other on the field. While they played a strong first half, passes were not getting to their intended target, Iowa blocked passes, or teammates were just not linking together.

“I think our connection from the back, we gave away a lot of balls,” Rayfield said. “We played balls to Iowa coming out of the back and we’ve got to be better about that because Iowa created some chances off of that. So we could get punished for that and get better at connecting out of the back.”

Going into the second half, the Illini kept their energy going, but we’re dominated by an even stronger Hawkeye team.

Iowa was able to get some shots on goal, leading goalkeeper Sami Sample to make two saves.

Not long after, the Illini earned a corner in the Hawkeye territory. The ball went into the box and after a touch from Murphy and forward Meredith Johnson-Monfort, the ball hit the bar. The Illini thought it went in, but the scramble for the ball fell to Pasquale and she scored, making that her second goal of the game in the 55th minute.

The remainder of the second half was quiet and the Illini earned the shutout for a 3-0 win over Iowa putting their record to 2-0.

“Today was another test for us; I think we stayed together as a team, which was really important,” Pasquale said. “Our biggest thing was that we were resilient, so being super competitive in every moment was big for us.”

Penn State will be Illinois’s next opponent on Sunday again in Champaign. One of the best and the projected No. 1 team in the Big Ten will prove to be a challenge for Rayfield.