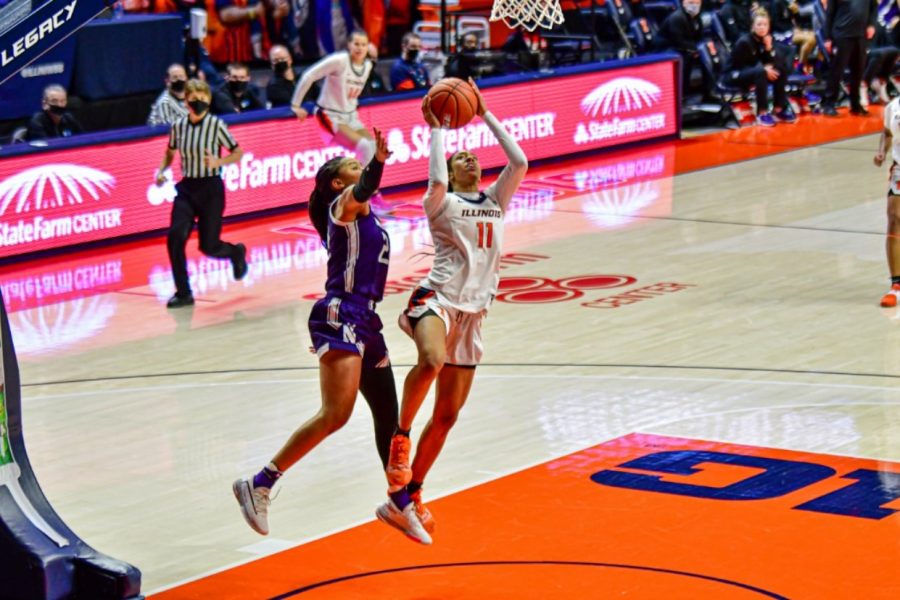 Sophomore Jada Peebles goes for a layup during the game against Northwestern on Thursday. The Illini will face Purdue tomorrow in West Lafayette.

The Illinois women’s basketball team is heading to Purdue for the last road game of the regular season. Tip-off is set in West Lafayette for 1 p.m. Central Time on Big Ten Network+.

In the first game between the programs, the Illini won 54-49, outscoring Purdue 7-0 in the last minute. Neither team has won since — Illinois has gone on a five-game losing streak since the Feb. 7 game and remains the only Big Ten team with one win. Purdue enters the game on an eight-game losing streak, last winning against Wisconsin Jan. 21.

Illinois narrowly lost to Northwestern Wednesday, 67-61. Often, Illinois has struggled to play four consistent quarters this season, with one quarter — frequently the second — putting themselves behind the 8-ball. The Illini were outscored 22-3 in the second against Northwestern.

Fahey said the team will try to adjust to the game conditions in the second period, but too often the adjustments come too late.

“When the other team adjusts (we) need to be able to counter that,” said head coach Nancy Fahey. “We’ve called timeouts to try to make sure if we see something like that, as we did against Northwestern game, it took us (until) halftime (to) adjust.”

The last Purdue matchup had a similar pattern as Wednesday’s Northwestern game, but the Illini were slightly more competitive in that second quarter against Purdue, getting outscored 24-9.

Fahey thinks slowing down Traylor will be key to a season sweep, but she’s also cognizant of the fact that unlike the last matchup, the game isn’t at the State Farm Center.

“We played (them) game one and we played them at home, got a win out of that,” Fahey said. “I think it’s (the) knowledge that you know, people shoot better at home. I think you know, stopping (Traylor) is gonna be key. I think that’s the engine that (runs) their team.”

An Illini win Sunday would be the first time in the Fahey era Illinois has defeated a team twice in the same season. They’re eager to go for the sweep, and they feel good about the upcoming game.

“(We’re) very confident, especially due to you know, beating them the first time playing them, as well as you know, just coming off of our game against Northwestern,” said sophomore forward Kennedi Myles.  “(We’re) just feeling pretty confident in our abilities.”