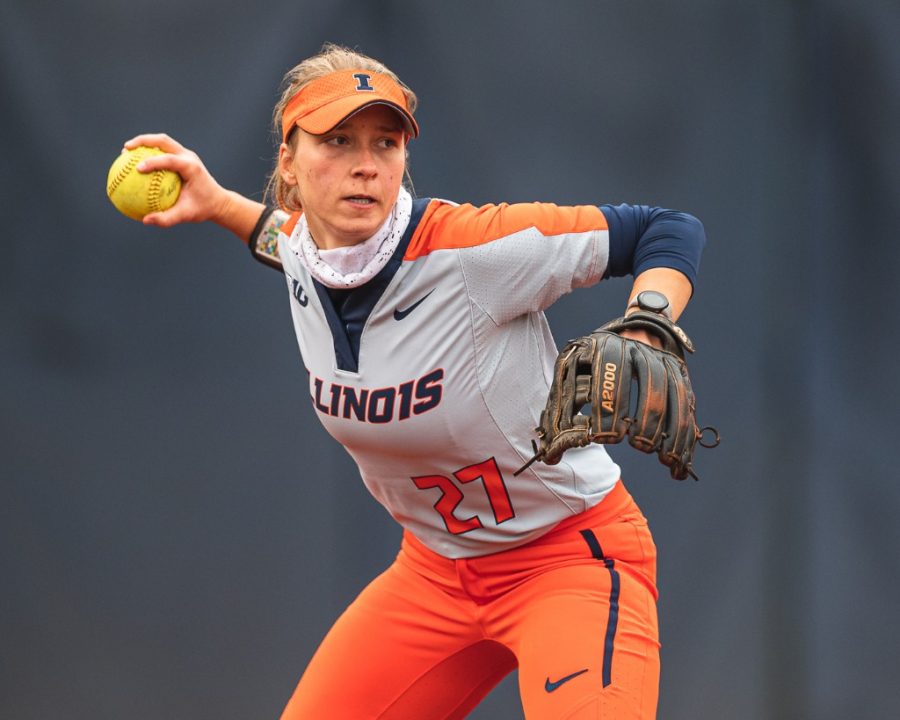 Senior Katie Wingerter throws the ball during the Orange and Blue World Series on Oct. 25. The Illinois softball team split its double-header against Maryland today.

Illinois got off to a flying start to its 2021 season on Friday, sweeping Rutgers while allowing just one run across the doubleheader. The offense was rolling, scoring 14 runs across the two-game set, and second baseman and leadoff hitter Avrey Steiner was hitting 1.000 while also driving in three runs.

Maryland came into Saturday’s matchup after splitting its season-opening series against No. 24 Minnesota despite allowing just three total runs. Though the Terrapins’ pitching was dominant against the Golden Gophers, their offense never got going, as they scored just three runs through two games.

In the first game of the series, freshman Tori McQueen got her first career start after making her collegiate debut against Rutgers on Friday. After allowing an RBI double in the first inning, McQueen settled in, going 4 ⅓ innings while allowing three hits and striking out three batters.

After scoring 14 runs in their first games, the Illini weren’t able to get on the board until the sixth inning, as sophomore Delaney Rummell evened the score on a sacrifice fly.

Both teams’ offense got going in the eighth inning, as the Illini sent 11 batters to the plate and put up six runs. Senior Maddison Demers picked up two RBIs on a 2-run single, while senior Katie Wingerter drove in one run on a single for her first RBI of the season.

The Terrapins weren’t going down without a fight, however, as they scored four runs in the bottom half of the inning. The Illini threw a runner out at third base to seal the 7-5 victory, and junior Addy Jarvis picked up her second win of the season despite allowing four runs.

The Illini weren’t able to celebrate for long, as the Terrapins jumped out to a quick 1-0 lead in the top of the first inning in the second game of the day. Graduate student Kelsie Packard made her first start of the season, and after allowing a run two batters into the game, she found her groove. Packard allowed just two more hits the rest of the game, as she went 5 ⅓ innings.

Rummell opened the scoring for the Illini once again, driving in junior Kailee Powell on a double in the third inning.

After the Terrapins took the lead in the top of the seventh inning, the Illini responded in the bottom half of the frame on an RBI single from Wingerter.

For the second consecutive game, the two teams needed extra innings to break the tie. The Terrapins took the lead on a single in the eighth inning, and the Illini couldn’t respond. The 3-2 loss was the team’s first loss of the season, while junior Sydney Sickels also picked up her first loss of the year.

Illinois will look to get back to winning ways against Michigan on Sunday. The Wolverines have won all four of their games thus far and have allowed only five runs all season. The games can be streamed on Big Ten Network +.