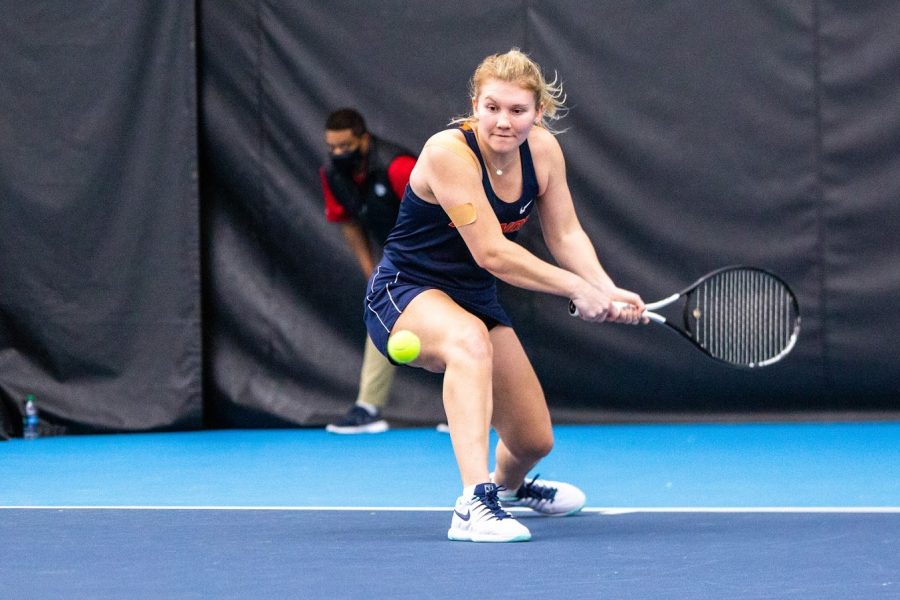 Senior Sasha Belaya returns the ball during the meet against Wisconsin on Friday. The Illini fell to Wisconsin, but beat Minnesota in a meet on Sunday.

On March 8, 2020, the Illinois women’s tennis team took the court at Atkins Tennis Center and defeated Purdue 4-1. Just four days after their Big Ten season opener, the Illini, along with other programs across the country, learned their season would be canceled due to the COVID-19 pandemic.

355 days later, the Illini finally returned to Atkins to play a competitive match. Illinois narrowly lost to Wisconsin on Friday before taking down winless Minnesota on Sunday, the team’s first win of the 2021 season.

The Badgers entered Friday’s match off two consecutive 4-3 losses, while the Illini lost their first three matches of the season prior to the matchup.

After losing the doubles point, Illinois looked to turn things around in singles play, but Wisconsin rattled off three straight wins to clinch the win. Senior Asuka Kawai, sophomore Ashley Yeah and freshman Kate Duong all picked up singles wins for the Illini, but it was too little, too late, as the Badgers left Atkins with the 4-3 victory.

Coming off their narrowest loss of the season, the Illini looked to bounce back on Sunday against the Golden Gophers, who also had yet to win a Big Ten match this season.

The Illini were able to generate momentum early in doubles play, as seniors Sasha Belaya and Emilee Duong won their match before Yeah and sophomore Josie Frazier sealed the team’s doubles point victory.

Yeah continued her dominant weekend in singles play with a win to extend the Illini’s lead to 2-0, while freshman Kate Duong picked up her second singles win of the weekend shortly after.

Duong is the only freshman on the roster, but head coach Evan Clark has been impressed by her maturity and by how fast she has adapted to the college game.

“(Kate) has handled herself fantastically,” Clark said. “We, of course, had high expectations for her. You just never know how (freshmen) are gonna adjust to college tennis. It’s such a different game, but credit to Kate for figuring it out so quick.”

Frazier clinched the win, winning in straight sets to give the Illini their first win of the season.

Clark praised the team for grinding out the win after such a rough and draining start to the season.

““I’m really pleased and proud and happy with our kids getting the W today; they deserve it,” Clark said. “They’ve been working hard but just couldn’t quite get over the hump to start the year. It still wasn’t easy, and it wasn’t pretty, but … they stepped today, and we saw a lot of improvement.

It was a huge confidence booster. There were a lot of smiles and happy people in the locker room, and hopefully this will get us some momentum headed into next weekend.”

Illinois will travel to The Wolverine State next weekend, as they face Michigan on Saturday before heading to East Lansing for a match against Michigan State on Sunday.