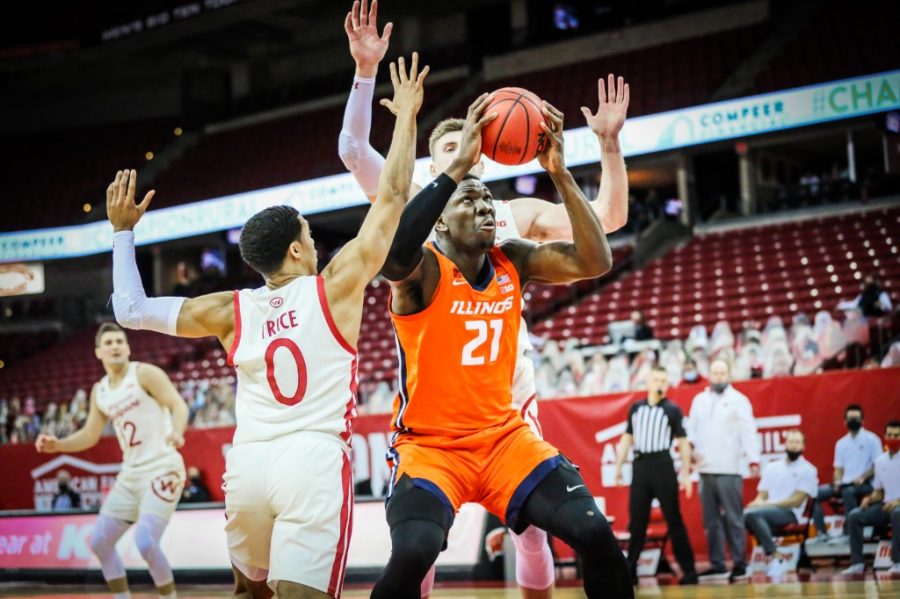 Sophomore Kofi Cockburn looks to shoot during the game against Wisconsin on Saturday. The Illini won the game 74-69.

Even without their star guard, Illinois was able to beat Wisconsin behind stout defense. The Illini held a double-digit lead for a large part of the second half before D’Mitrik Trice got insanely hot at the end and kept the Badgers in it.

Ultimately, Illinois made enough free throws down the stretch to hold off the Badgers. Let’s take a look at eight Illini performances from the win.

There isn’t much more to say about Cockburn at this point. He turned in another All-Big Ten performance, going for 19 points on over 50% shooting. Free throws were again an issue, making just five of his 11 attempts.

Defensively, Cockburn was rock solid. Micah Potter and Nate Reuvers combined for 21 points on 8-22 shooting. Cockburn was held under his average, but considering the defensive attention he received, it was a quality performance.

Illinois fans got the full Curbelo experience on Saturday. The Badgers dared him to score, and he did, getting to the rim consistently for 17 points, his most in conference play this season. The big negative was one assist and six turnovers, but I think you have to live with that with the load he was tasked with. He also grabbed seven rebounds.

Williams got off to a hot start, scoring five of Illinois’ first seven points. He finished with 12, including a key second-half three and long two, which was Illinois’ last field goal of the game. He also snagged four rebounds and dished out four assists, his third highest total in Big Ten play. He also played terrific defense on the bigger Aleem Ford, holding him to 1-7 shooting from the field.

I docked Williams down a notch because of a technical foul he received late while arguing with a Wisconsin coach. It was a double technical, but as a senior, Williams has to be smarter in that situation. He admitted as much post game. Still, a very quality performance for the senior.

Frazier didn’t have his best shooting day from the field, nor was he on his mark defensively, as D’mitrik Trice went off in the second half. But Frazier’s clutch free throws, including four consecutive late in the second half, helped propel Illinois to the win. He also grinded out 39 minutes, a season-high.

Another player with a quiet scoring day, Grandison shot just 1-4, but he led the Illini in rebounds with eight, which was key against the veteran Badgers. Defensively, he chased the Badgers off the three-point line, a key reason he finished with a team-best +17 plus/minus.

Grandison’s numbers don’t stand out from the box score, but the plus/minus shows his true impact.

The Rustavi, Georgia, native had his full display of touch on Saturday, scoring seven points on 3-4 shooting. The rebounding was a concern, as he had just one in sixteen minutes, but he was strong on defense and finished with a positive plus/minus.

Miller had a quiet scoring game, but he made his impact felt in different ways. He finished with just six points, taking three shots, but he grabbed five rebounds. He also had a steal and finished with a -5 plus/minus

Hawkins had a really nice rotation for a block and a good drop off to Bezhanishvili for an assist. From there, it was all downhill. He had back-to-back turnovers before being subbed out. When he came back in later, a lane violation cost his team a point, which could have been detrimental in a close game.