With Dosunmu out, Adam Miller fills a familiar role as primary scorer 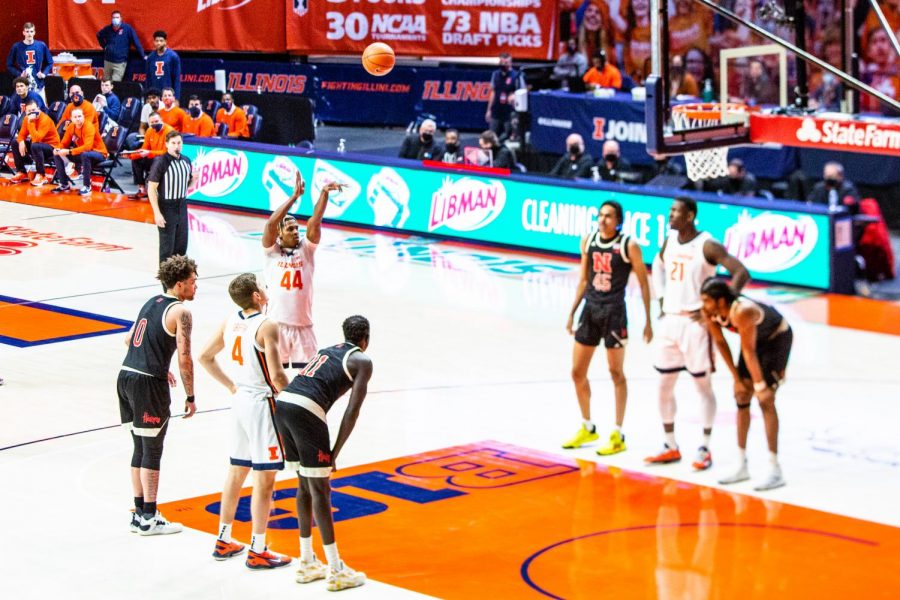 Freshman Adam Miller shoots a free throw during a game against Nebraska on Thursday at State Farm Center. Miller became the primary scorer after Ayo Dosunmu was benched for facial injuries.

With Ayo Dosunmu out of the lineup on Thursday, freshman guard Adam Miller knew it was his time to shine.

Against Nebraska, Miller showed why he was one of the top scorers in the Nike Elite Youth Basketball League, the premier Amateur Athletic Union league, exploding for 16 first-half points. The four-star freshman stepped into the role of the scoring off-ball guard, using a display of midrange jumpers, acrobatic finishes and threes. For Illini fans, this outburst may have come out of nowhere, but Miller is used to filling Dosunmu’s shoes.

At Morgan Park High School, Dosunmu and Miller were once teammates. Dosunmu, senior at the time, commanded the role as the primary scoring option, while Miller was the number two. At the Big Dipper holiday tournament, Dosunmu was out with an ankle injury, so like he did Thursday night, Miller became the main scoring guard. He led Morgan Park to a tournament victory, scoring over 25 points per game on the way to winning tournament MVP.

“My coaches told me to step up, and I stepped up,” Miller said. “I’m gonna always do my role … I just felt comfortable. A little bit more shots here and there, a little more touches, a little more looks. I was just feeling good.”

For the Peoria native turned Chicago high school star, his role has been much different than any other time in his basketball career. The once prolific Illinois High School Association scorer has become somewhat of a fourth option behind Dosunmu, Kofi Cockburn and Trent Frazier. He’s been confined to just eight shots per game, likely the lowest of his basketball career. Two nights prior, Miller registered a season-low 16 minutes on 0-3 shooting.

But whether Miller is playing 16 minutes or taking a season-high 15 shots as he did on Thursday, his mental state stays the same.

“I really have the same mindset most of the time,” Miller said. “I always feel like attacking. It’s just going out there and doing it. I feel like now that he’s out, okay, I really gotta do it now. I don’t want to say that I sat back; it’s just another level.”

When Miller first committed and signed to the University of Illinois, that was the role he was expected to play. Dosunmu had his name in the NBA draft and was “99.9%” committed to making that leap. But in late July, he announced his return, unintentionally diminishing Miller’s role.

Is Miller angry at all about that decision? Not in the slightest. Though the Nebraska game was a glimpse of what this season could have been for him, he’s grateful to have his former teammate on the court with him. Even after Dosunmu returned, Miller never once wavered on the Illini.

“I came to play for the school,” Miller said. “To have him here, it really has helped me. My production might not be as much, but we are winning and learning so much in the process. He’s been in those shoes.”

With Dosunmu out against Wisconsin, Illinois needed Miller to continue to fill the role of the scoring guard. After Dosunmu returned from injury his senior season at Morgan Park, he and Miller teamed up to lead the Mustangs to the IHSA 3A championship. This opportunity for the freshman is not only a preview of what the next season could look like, but it could also unlock him for the final push, as Illinois looks to have the same end result as the Dosunmu/Miller Mustangs once did.