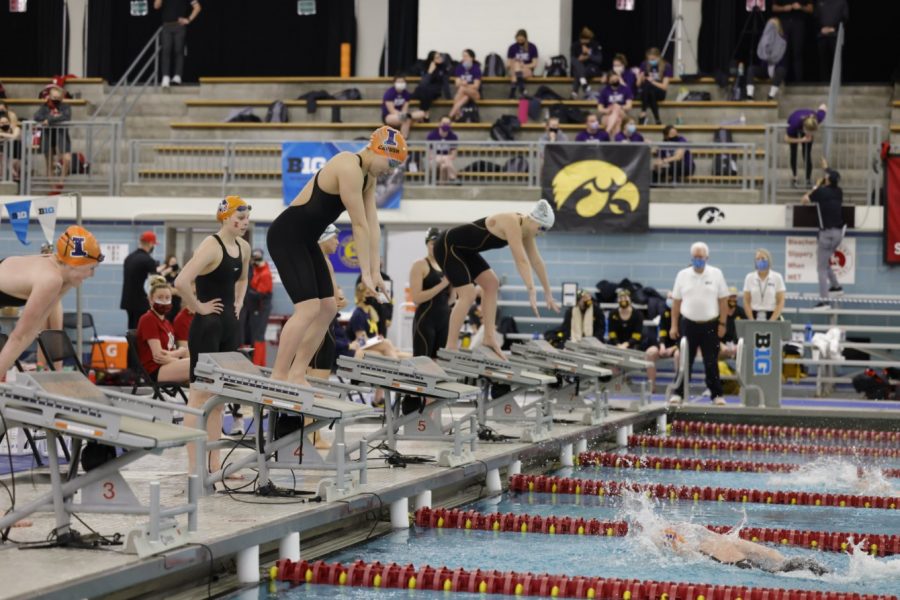 Junior Abigail Cabush prepares to dive in during a relay race at competition. The Illinois swim and dive team placed 12th at the Big Ten Championships this week.

The Illini swim and dive team placed 12th in the 2021 Big Ten Championships and finished with 177 points, which was spread out throughout five days of action.
This playoff battle featured the most personal records broken by the Illini at the Big Ten Championships since 2010 and included a new school record in the 200-freestyle event by junior Abigail Cabush.
Cabush and freshman Cara Bognar both advanced to the Championship finals for the Illini finishing in 16th place with a time of 1:49.14 and in 23rd place with a time of 4:19.40 in the 200 freestyle and 400 individual medley, respectively.
When asked about her ability to stay focused and poised during such a competitive environment, Bognar applauded her teammates for getting the “balling rolling” for her to accomplish amazing things.
“The best thing that I do before my races and throughout the meet is actually looking at my teammate’s success and cheering with everyone as a team because it’s kind of helps build the momentum and keep the energy up for me,” she said. “Finding out I qualified for finals was incredibly exciting because it was another opportunity to race not just for myself, but the team as a whole … Everything I’ve done to get there; I couldn’t have done without every single one of them.”
In the first day of competition, the Illini placed top ten and finished with a couple of swimmers breaking their personal records in both events that took place that day. The Illini ended the day in 11th place and with 64 points.
Bognar’s split time of 1:50.24 in her 800 freestyle relay leg and sophomore Athena Salafatinos’s split time of :25.36, which is also the third-fastest time by any swimmer in school history, during her leg in the 200-medley relay were the first of 40 career bests for the Illini.
On day three, the Illini had twelve more personal records placed and finished with four top-10 finishes. The team finished the day with 109 total points.
During the 200 freestyle preliminaries, Cabush broke the school record with a time of 1:47.80. A record which she previously held earlier in this season against Wisconsin with a time of 1:47.90 on Feb. 6 before she broke it again.
Cabush talked about how head coach Novitsky made sure everyone came to every session with a refreshed mind and gives the swimmers tips on how to enhance their hard work, which was really helpful for the team.
“She talked about coming to every session ready to swim and excited bringing the energy. She keeps it really simple for us,” Cabush said. “I think she knows that we put in the work all year. We should know how to swim fast, so small reminders and small motivations is what she tries to do. I think it really helps and the team receives it very well.”
Several more freshmen placed personal records during the third day including Lily Olson in the 100 butterfly with a time of :55.30, which recorded her as sixth fastest in Illini history, and in the 50 butterfly with a time of :25.65, which was good enough for eighth fastest in Illini history.
Freshmen Laurel Bludgen and Lauren Beard also recorded new personal best records in the 200 freestyle with times of 1:52.67 and 1:58.66, respectively.
Novitsky acknowledged how fun it has been to see her underclassmen swimmers improve throughout the season and praised the impact of the team’s veterans on them.
“We have relied on everybody on the team, but it’s great to see some of our younger athletes that are just getting started with their college career being able to step up and contribute,” Novitsky said. “I thank our returning athletes for being able to guide them along the way in this entirely new way of life that we had to go through this year, and still trying to instill our team goals, what we work for and how we do things.”
This year, the Big Ten Championships featured six ranked teams including No. 7 Northwestern and No. 9 Michigan.
First place at this year’s Championship meet went to Ohio State University with a score of 1584 points followed by the University of Michigan in second place with a score of 1326.5 points.
Coach Novitsky mentioned how she is already thinking about how the team can continue to improve for next season and expressed how optimistic she is that the Illini will return with a few more people competing in the finals of the Championships next year.
“I think with all the athletes there are always individual things that we can keep working on; there is a lot of momentum we can build on to keep them aiming for the future and keeping them headed towards higher goals,” Novitsky said. “We’ll be graduating our senior class, but we’ll also be getting another great group of incoming freshmen in the fall and we’ll just keep adding to the depth and talent that is already on the team to continue to keep putting those pieces in place.”