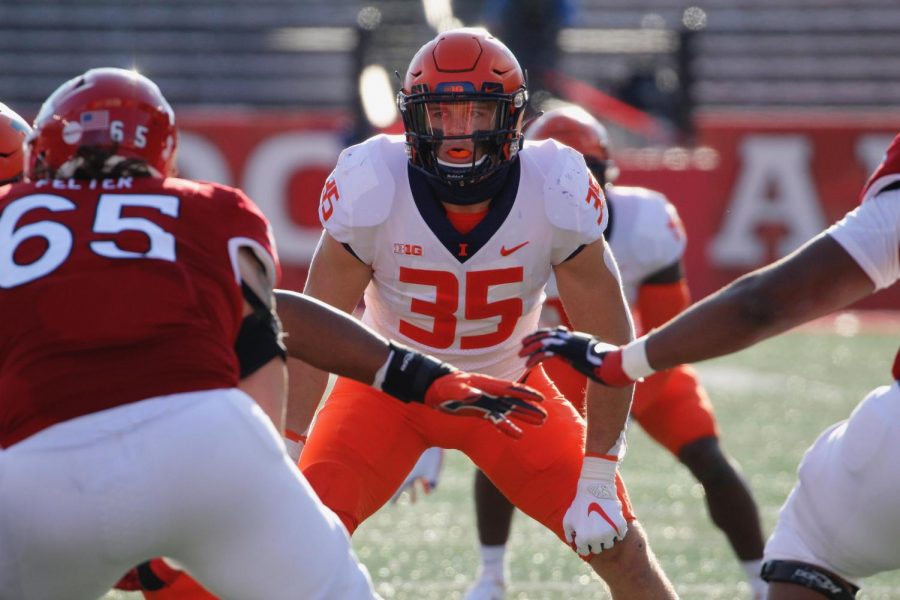 Senior linebacker Jake Hansen stands ready on the line of scrimmage during the game against Rutgers on Nov. 15.

Illinois senior linebacker Jake Hansen has announced his return to the team for a fifth year of eligibility. Despite declaring for the NFL draft earlier this year, Hansen announced via the Illinois Football Twitter page his plans to return.

Back in the fight! Welcome back, @Juggs35! #Illini pic.twitter.com/I6x0j2bvjg

The return of Hansen heavily improves what would have been a razor-thin group at the linebacker position. Last year’s starter alongside Hansen, Milo Eifler, also declared for the NFL draft, leaving the position with very little experience for 2021. Hansen’s decision to come back strengthens the room heavily for new linebackers coach Andy Buh and the rest of the defense.

Hansen joins defensive lineman Owen Carney as the second Illini to announce his plans to depart, followed by a decision to return to the team later on. Carney entered the transfer portal before coming back, and Hansen’s decision to return is another huge win for Bret Bielema and the staff for 2021.

With his return, Hansen is now the fourth defensive starter to return to Illinois for the fifth season. A week ago, the linebacker position looked to be the thinnest defensive spot, but returning the third-best tackler in the nation is sure to leave the linebackers, and the rest of the defense, feeling good heading into training camp.

Hansen’s decision to come back continues to improve Illinois fans’ opinions on Bielema and his new coaching staff as well. Hansen had already spent five years at Illinois and each year he played has made a difference. He was there for all five of Lovie Smith’s seasons, and to return a player as good as he was with an entirely new coaching staff goes to show how well Bielema and his staff have won over the team.

With his ultimate goal being a career in the NFL one day, Hansen will have one last shot to prove himself as an Illini in 2021 before the combine a year from now. He is third in team history with 10 career forced fumbles, needing three to tie the record held by Simeon Rice and Whitney Mercilus.

The opportunities are there for Hansen, who will lead the Illinois defense one last time in 2021.