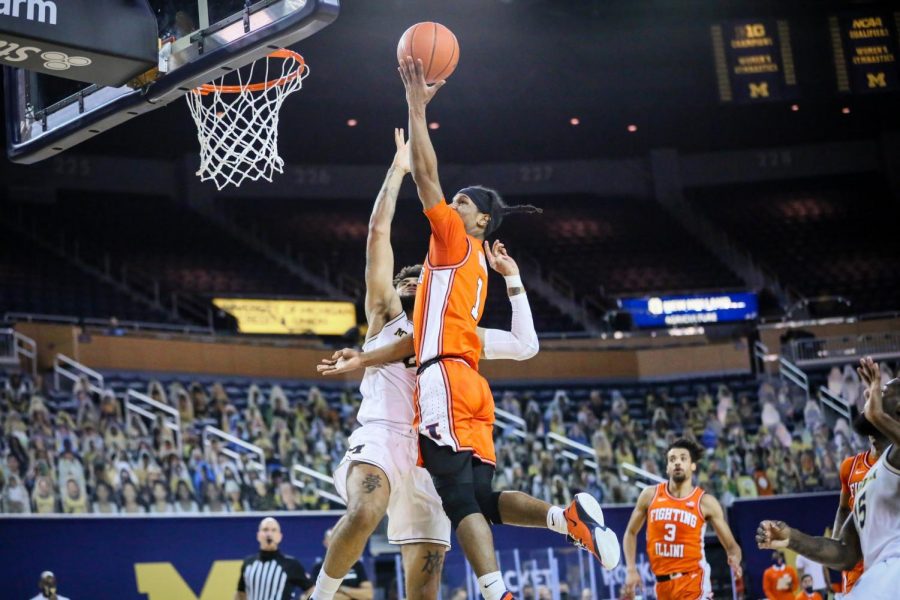 Trent Frazier goes up for a layup against Michigan on March 2. Frazier scored 22 points in the Illini’s 76-53 win.

ANN ARBOR — Speculation surrounding Ayo Dosunmu’s return to the floor began Tuesday morning after Illinois basketball’s Twitter posted a picture of the Illini guard participating in the shootaround at Crisler Center. But over an hour before tipoff, an Illinois spokesperson revealed Dosunmu would miss his third straight game.

Playing on No. 2 Michigan’s court, the No. 4 Illini could’ve folded without their star player, as every betting site or basketball analyst assumed they would. Instead, Illinois flourished behind Trent Frazier’s explosive 22-point performance and a collective dominant effort on the glass, taking down the conference leader, 76-53.

“The word of the day is ‘special.’ If you were in that locker room or on that court for 40 minutes tonight or on the sidelines, you would feel that,” Frazier said. “That intensity, that energy. It was very special out there tonight. Just knowing we’re coming in with a chip on our shoulder. We want to prove to everyone how hard we play and we’re not done yet. We just got to come in every day, continue to get better, stay focused. It’s nothing new. This is what we do. This is the culture the coaching staff has created. We have a team of guys that want to come out here and play hard for 40 minutes.”

Neither Illinois nor Michigan started the first half strong on offense, as they were a combined 2-13 from the field through four minutes of play. After scoring first, the Wolverines sat at two points for five minutes, while the Illini took an early 5-2 lead, courtesy of a Da’Monte Williams trey.

Then, the first-half Andre Curbelo show began. After Isaiah Livers scored back-to-back baskets for the Wolverines, Curbelo got to work, hitting a short jumper then splitting a pair of free throws to give Illinois the lead back. He then carried Illinois through an 8-0 run and broke down the Michigan full-court press to score six points in four minutes, putting Illinois up 16-10.

While Curbelo’s remaining first-half minutes were minimized by his two fouls, the Illini kept the offense flowing. Kofi Cockburn took advantage of Dickinson being on the bench due to foul trouble, scoring six points in the final few minutes. Made free throws by Trent Frazier and Da’Monte Williams followed by a Frazier steal and jumper gave Illinois a 33-22 lead going into halftime, the largest gap of the night.

“One thing you never have to worry about with Andre Curbelo is there’s going to be something happening,” head coach Brad Underwood said. “And he’s always ready. He plays with zero fear and so much confidence. He was ready and he was in go-mode and he went. He was good.”

Giorgi Bezhanishvili came up big for the Illini while Cockburn was on the bench. The junior contained Austin Davis on the boards, leading to a string of Illinois offensive rebounds that created seven second-chance points.

Then, it was Frazier’s turn to make his run, scoring six points in under a minute off an and-1 jumper and a long trey to give Illinois a 20-point lead. The Illini senior stayed hot, scoring another seven consecutive points to give his team its biggest lead of the night at 64-36 with less than 10 minutes to play.

Frazier’s run sealed the win for Illinois, who continued to push Michigan around until the final horn.

“(Frazier) is such a good player and he does it at both ends,” Underwood said. “When Trent gets going, it’s a pretty lethal backcourt. And I’m really happy for him because he’s the ultimate team guy, he’s the ultimate Illini and we saw that tonight with his grit and toughness.”

While Illinois’ scoring was efficient, the energetic effort on the glass was the separator between the Illini and the Wolverines Tuesday night. Illinois outrebounded Michigan 42-26 and finished with 22 second-chance points, with Grandison being a major part of that success with three offensive rebounds.

“To come in here and be able to get a win at No. 2 Michigan, it was all about defense,” Frazier said. “We got a lot of guys who can make plays on offense, but that wasn’t our focus. Our focus was kills, kills, kills. It started out on the defensive end. We had guys diving on the balls. Jake taking charges. Guys getting the rebound and helping Kofi out.

“We knew it was going to be a dog fight from the start. We just had to take their punches and keep throwing ours back.”

The win in Ann Arbor is impressive for Illinois, but Underwood’s squad will have to get right back to work, as they travel to No. 7 Ohio State on Saturday to close out the regular season.