Illinois gets shutout by Wisconsin in second-straight loss 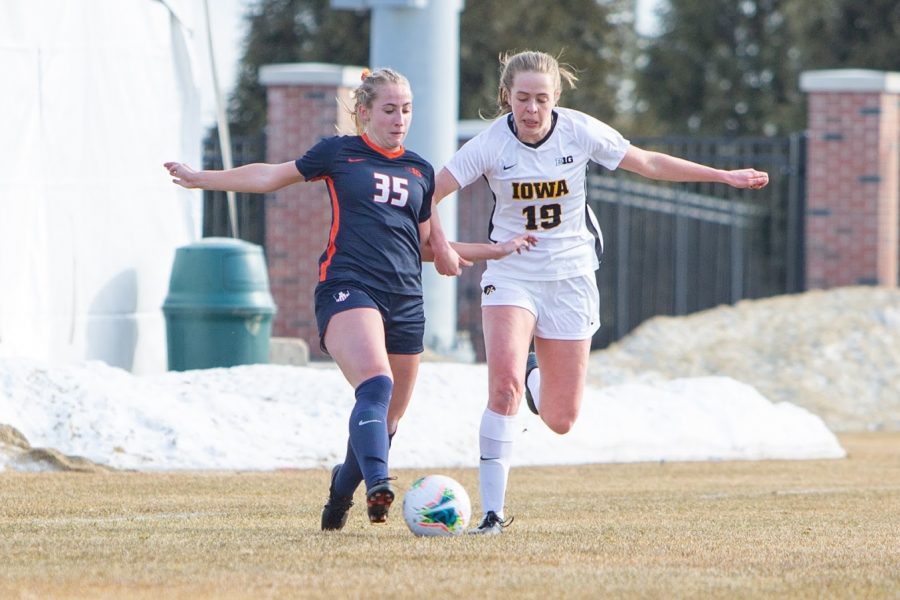 Junior Lauren Stibich battles for control of the ball during the game against Iowa on Feb. 25. The Illinois soccer team fell to Wisconsin 1-0 on Thursday.

In Loves Park, Illinois at the Mercyhealth Sportscore facility, the Illinois soccer team fell to Wisconsin 1-0 after suffering an early goal from the Badgers.

The Illini went into the game coming off a 2-0 loss against Penn State, while Wisconsin earned a 1-0 win against Michigan.

These past two games saw the Illini face some of the tougher opponents in the Big Ten and it was representative of the final score. Facing the 2019 Big Ten Tournament champions (Penn State) and conference winners (Wisconsin), the Illini had a tough slate of games.

Last match, Illinois conceded within the first five minutes of the game and wanted to make sure it would not have been a repeat against Wisconsin.

Both the Illini and the Badgers fought a hard five minutes for control and possession.

The first chance went to Illinois in the fifth minute after a corner sent in from midfielder Hope Breslin found its way to midfielder Eileen Murphy’s head. The header went wide of the goal for a goal kick to Wisconsin.

The next two chances came from Breslin and Murphy again, but were either saved by Badger goalkeeper Jordyn Bloomer or went out for a goal kick.

Wisconsin had a breakthrough in the 14th minute after Maia Cella sent a pass to Emma Jaskaniec and beat Murphy for the 50-50. Jaskaniec took a shot and was able to get it past goalkeeper Sami Sample to put the Badgers up 1-0.

What the Badgers do when they get the ball, is that they quickly turn over and already have several players pushing up on offense to support the player who has the ball.

“When you play against a team like Wisconsin who has high energy, wants the game to go fast,  every time you turn the ball over it creates tough situations because they send so many numbers forward in that transition moment,” Rayfield said.

After that goal, Sample was being tested on her line after multiple shots and chances were coming at her and the defense.

Sample kept her composure and was able to block the two shots on goal to not let in another behind the net.

Going into halftime, although the Illini had tallied four shots, only one of them was able to make it onto frame.

The second half was a lot more quieter in terms of action. No saves from goalkeepers or shots on goal for both teams. Illinois and Wisconsin had a total of four shots, two apiece.

Rayfield said that Illinois had a much better second half after creating two great chances from Silber and defender Kendra Pasquale.

“We played the kind of ball we want, we got the ball in behind Wisconsin’s defense and just didn’t put the shot on frame,” Rayfield said.

The adjustments Illinois made for the second half not only saw two great chances — they were in the Badger’s half a lot more; however, they were not able to finish the chances.

“We’ve got to limit our unforced errors and finish with some confidence when we create those chances,” Rayfield said. “I think if we do that then the result today could have been different.”

Illinois’s next game will be this Saturday against the Minnesota Gophers.