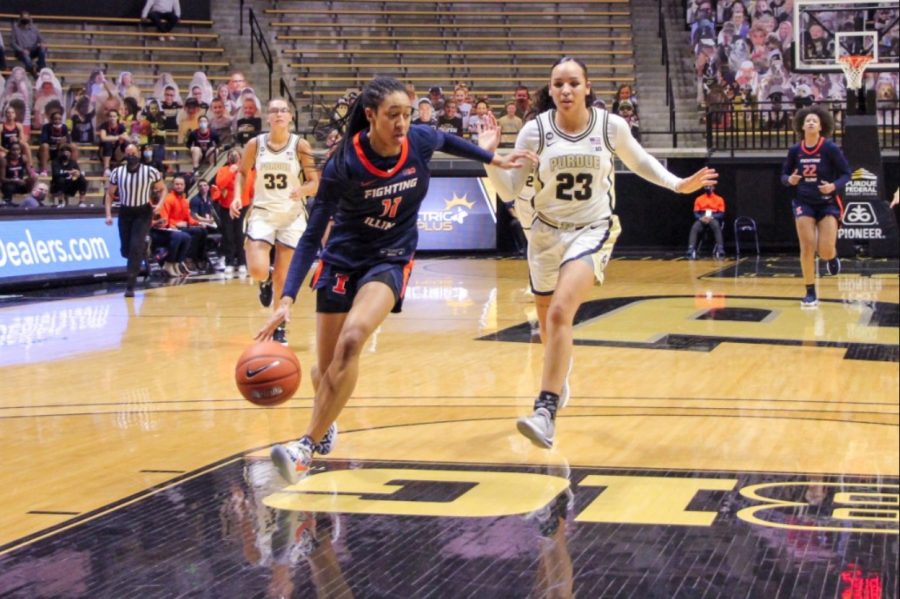 Sophomore Jada Peebles pushes down the court during the game against Purdue on Sunday. The Illinois women’s basketball team will play against Minnesota today.

Heading into Senior Night, the Illinois women’s basketball team looks to end its season with a win against Minnesota.

This team is fairly young with no senior starters, and as a result, only two players will be honored: Lyric Robins and Nancy Panagiotopoulou. Neither has made immense contributions on the court, but they are both academic All-Big Ten and regarded highly by their teammates.

“They’ve been really great leaders for this team, whether they’re playing a lot or not,” said redshirt junior center Eva Rubin. “They’re saying the right things and doing the right things, always stepping up when we need them. They’re just really high character people, and I’m glad I’ve been able to meet them and spend time with them.”

This will be the second time Illinois faces Minnesota, with the first coming almost a month ago. In that game, the Illini dug themselves a massive 29-point deficit in the third quarter, but credit to Illinois, they came back.

Illinois got within seven points, but it was too little too late, and Minnesota pulled out a 10-point win. The Golden Gophers’ backcourt was a major problem last time out, as their duo of sophomores — Sara Scalia and Jasmine Powell — combined for 37 points.

“Their backcourt is their three leading scorers, actually, they have four that are really good,” said head coach Nancy Fahey. “Inside we have to take advantage of our size. We didn’t do a good job of that in the first game, so we feel like we’ve got to get a little more post touches to counteract that offensively.”

Fahey also wants to make sure that the backcourt is not getting loose in transition and creating easy scoring opportunities, so the Illini need to limit their turnovers.

In the last outing, the Illini also struggled to defend the three-point line. Minnesota made 11 of their 25 attempts from distance and used it to develop a big early lead. The three-point pressure went even further, as Minnesota was willing to take much deeper threes than Illinois normally sees.

“We have to have trust that we have ball pressure, but we have to make sure we maintain our help-side defense and really move quickly on the pass,” Fahey said.

If the Illini are going to take their seniors out on a victory, they’re going to need a resurgence from their backcourt. Sophomore guard Jeanae Terry has struggled lately.

After a hot stretch between January and February, Terry ended the month in a slump. She has failed to score in double figures since the last Minnesota game and is shooting a putrid 18% from the floor during that time. Terry is also averaging nearly five turnovers a game in that span, and her effectiveness on the glass and as a playmaker has shrunk.

Sophomore guard Jada Peebles, on the other hand, has thrived of late. She has scored double digits in six straight and nine of the last 10 games. Her shooting has gotten better, and she is finally developing into a player that can lead a team. Peebles needs to keep up her recent success in this matchup.

Tip-off is at 4 p.m. Friday at State Farm Center. Following the game, the Illini will head to Indianapolis where they will compete in the Big Ten tournament.