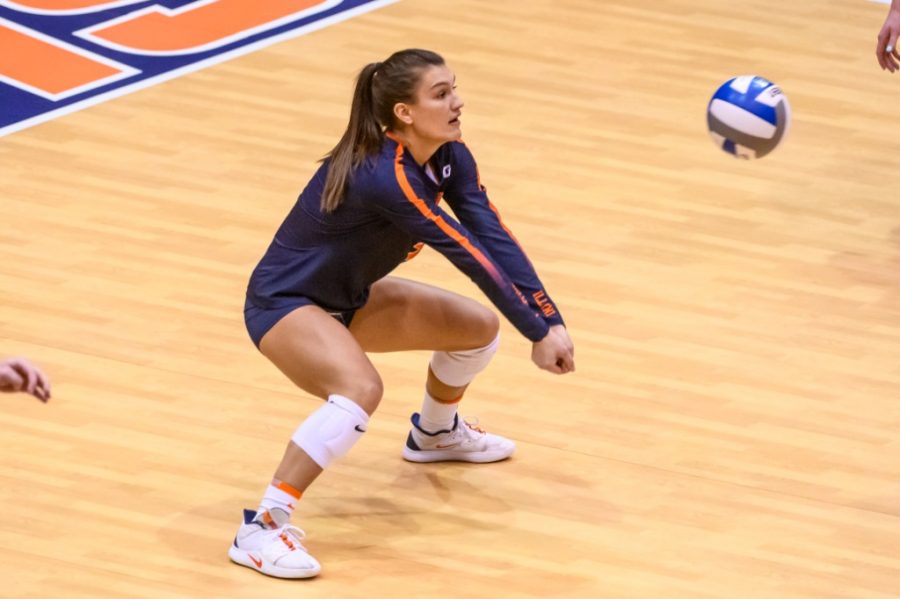 Junior Taylor Kuper bumps the ball during the game against Ohio State on Feb. 19. Illinois will face Nebraska twice this weekend.

Illinois will host No. 4 Nebraska at Huff Hall on Friday at 8 p.m. and Saturday at 6 p.m. Nebraska is currently 7-1 and will be Illinois’ third top-10 opponent out of its last four matches. This will mark the Illini’s first matches in nearly two weeks, as last week’s matchups with Northwestern were canceled due to COVID-19 concerns.

Despite the challenge, this matchup will be telling as to whether the Illini can turn their season around after starting 2-6. Illinois is currently facing a 6-match losing streak, the longest of head coach Chris Tamas’ tenure.

After Illinois’ loss to Ohio State on Feb. 19, there was a team meeting in which players reaffirmed their trust in one another, according to freshman Raina Terry. After the meeting in their second match against Ohio State, the team seemed a bit more cohesive, but the end result was still a loss. The question now becomes how the team will respond to that loss, combined with extra time off to reflect.

“For me, (maintaining morale) is a lot of talking about culture and what we’re about,” Tamas said. “You can never guarantee wins, you never can. Especially in this conference, so it’s just about making sure that we’re always doing the right things on and off the court. Making sure that we’re giving our best effort and being good teammates.”

So far, Illinois has been inconsistent when attempting to contain elite middle blocker opponents like Stivrins. Wisconsin’s Dana Rettke feasted against Illinois to the tune of 14 and 10 kills in the two matches, while hitting .592 and .292, respectively. Penn State’s Kaitlyn Hord put up similar numbers, logging 10 and 11 in her two matches while hitting .261 and .556, respectively.

Nebraska has only lost five sets all season, so taking three sets off of them will be a tall task given the matchup up front. This will be a big opportunity for promising sophomore middle blockers Rylee Hinton and Kennedy Collins to show improvement from their previous matchups. With the additional week of rest and preparation, Illinois should at least be well-prepared even if they are undermanned due to sophomore Ellie Holzman’s ACL tear.

Though the Illini are currently sitting in a large hole record-wise, a silver lining is that most of their matches have been close. With a young team, Tamas thinks improving some little things may be the solution to getting back in the win column.

“We have too many lapses that if we can just stop the five-point runs and maybe turn it into two or three, that’s something we can do,” Tamas said. “There’s still a lot of points within our control that we can at least take better swings at.”