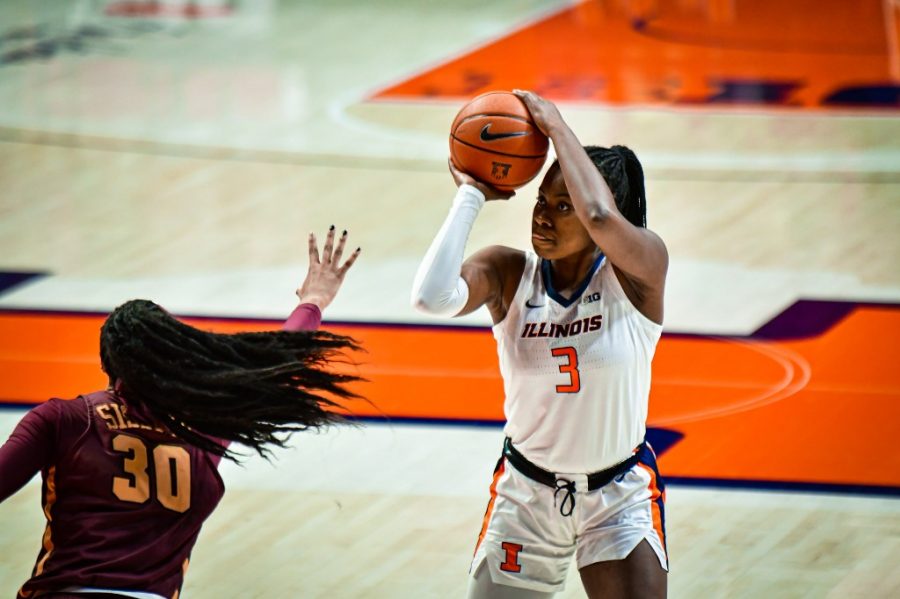 Sophomore Solape Amusan shoots during the game against Minnesota on Friday. The Illini won the game 72-64.

In their final game of the regular season, the Illinois women’s basketball team defeated Minnesota 72-64.  The Illini offense was clicking throughout the game, in large part because of their ability to score inside, finishing with 44 points in the paint.

“We worked on running different sets in the zone that would allow me and the other bigs to get more touches,” said redshirt junior center Eva Rubin.

The first quarter was a high-scoring back and forth affair. The Illini took advantage of their size in the first and held a small lead throughout. Rubin only played four minutes in the period but scored six points and was given ample touches.

The second quarter looked similar to the first. Both teams continued to shoot the ball well and were in a tight game. Heading into the half, the game was tied at 35.

The offense was the name of the game in the first half. Minnesota shot 48% from the field while the Illini shot 45.5%, one of their best shooting halves of the season.

“Every quarter we came out and played, there wasn’t ever a lapse,” said head coach Nancy Fahey.

In the third quarter, Minnesota built up a small lead, and the Illini responded in a loud way. Their defense stood up. and offensively, Illinois continued to find easy points close to the rim.  The Illini led 57-51 with 10 minutes to go.

Jada Peebles started the fourth quarter started with a three, a big shot for the Illini as they had some breathing space on Minnesota.  The closest Minnesota would get is seven the rest of the way, and the Illini pulled off their second win of conference play.

The Illini were led by Rubin’s 16 points, just one shy of her career-high. Peebles added 15 points of her own including three made shots from deep, but sophomore guard Jeanae Terry was the story of the night.  After some recent struggles, Terry fell just one assist shy of a triple-double with 11 points, 10 rebounds and nine assists.

“I’m very versatile,” said Terry. “I can score, rebound, get my teammates in the right spots for them to score. I heard a lot of people saying, ‘hey you have one more assist,’ you’re so hungry to get that assist, but we have the Big Ten tournament coming, so there’s always time for me to get [a triple double] again.”

After the game, the team honored forward Nancy Panagiotopoulou and guard Lyric Robins. Both players got emotional after a video of their families congratulating them was shown on the State Farm Center jumbotron.

“It’s an emotional day,” said Fahey. “It’s our last time on State Farm this year, so there’s a lot of meaning. This team could’ve chosen to take a lot of different paths, and they chose to keep fighting and it was nice for them to be rewarded today.”

This game marks the end of Illinois’ regular season, and they will finish with a record of 4-17 on the season and 2-16 against the Big Ten.  The Illini will likely not play in a post-season tournament, so the upcoming Big Ten tournament will be important for them.