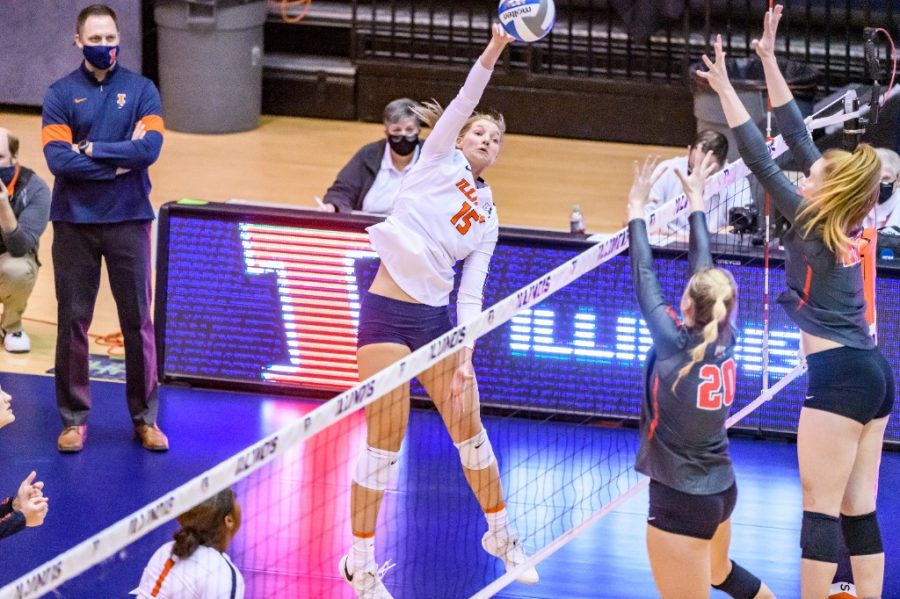 Senior Megan Cooney spikes the ball during the game against Ohio State on Feb. 19. The women’s volleyball team lost two matches to Nebraska this weekend.

The losing streak continues. Although Illinois fought hard on Friday and especially Saturday, they dropped two matches to No. 4 Nebraska. This increases the Illini’s drought to eight consecutive match losses, increasing on the worst such streak in head coach Chris Tamas’ tenure.

“It doesn’t feel good to lose, but I think that in this stretch of (losses) we’ve played some pretty tough teams,” said redshirt sophomore setter Diana Brown. “The Big Ten is pretty good and that’s why each of us came here. We came here to play a good team every single night. In this stretch of being not so good record-wise, you look for the little victories and you keep improving every single night. We often talk about improving 1% each day, so going forward through this week. Yeah, it sucks to lose, but we still have to play. ”

While both matches were 3-0 sweeps by Nebraska, the Illini played them much closer on Saturday than a quick glance would suggest. Illinois led for much of the first set, and only narrowly lost 26-24, while in the second set they battled back from an early deficit to fall just short 30-28. The third set was less close, ending in a 25-17 loss.

While Illinois has narrowly lost more than a few sets this year, breakout freshman Raina Terry thinks it’s just been a matter of catching bad breaks.

Although Illinois lost, they installed some major changes to the roster, switching from the 6-2 rotation they have utilized all season to a 5-1 rotation. This meant that a variety of different players had their role within the team changed, including Brown who was the only setter on the court for almost the entire match. Having experience in Illinois’ 5-1 rotation last year, Brown responded well, registering back-to-back season highs of 27 and 32 assists on Friday and Saturday respectively.

According to Tamas, the motivation for the rotation change came from a variety of factors, including the losing streak, injuries and Terry’s accelerated development.

“(Terry’s) got her strength back,” said Tamas. “She’s really taking some big swings, and it’s what we’ve known she can do for a while and is part of the reason we’re making the switch to a 5-1. She’s got a back-row presence, she’s able to pass and play defense. We look forward to more as we keep moving forward here.”

Terry has continued to look like a key to Illinois’ future, logging 12 and 13 kills on Friday and Saturday while hitting an incredibly efficient .400 and .320 respectively. At this point, she’s proven that she can compete against elite competition at least as a second option.

Currently, senior hitter Megan Cooney is still getting the most touches, but teams have keyed in on her lately, forcing some ugly numbers. This weekend, she hit -.044 on Friday and .100 on Saturday, two of her three lowest numbers of the season.

As a whole, the team seemed much more engaged this weekend. One reason for it may be sophomore defensive specialist Alyssa Eske’s insertion into the lineup, as she’s been a bit of a glue player for the team from the bench this season. Up until this weekend, she had only come into matches as a serving specialist.

“(Friday), she was fighting off the nerves a little bit, but put her back in there today and she responded well. She gets back there and she’s one of our energy people, so she gets out, gets digs and gets the team going. Good to see that,” Tamas said.

Along with Terry’s and Brown’s big Saturdays, it seemed that the connection between Brown and middle blockers Rylee Hinton and Kennedy Collins was solidified, with Brown assisting on a variety of quick kills for both Hinton and Collins.

“We’ve been here since December 7th,” said Brown. “We didn’t get to go home for Christmas. Didn’t get to go home for New Years’, so we worked a ton on connection and it finally clicked tonight, so I’m just really proud of my hitters. In this conference, everybody has good middles, and I think we have good middles too. If they’re up, they’re quick, they’re yelling for the ball, and I feel totally comfortable giving them the ball.”

Although the losses are piling up in a very concerning manner, it seems that Illinois’ young core is getting better each week and it may only be a matter of time before they breakthrough. Until then, Illinois will have to continue to settle for moral victories and positive sentiments. They’ll get the chance to show some signs of life next week when they travel to Maryland.