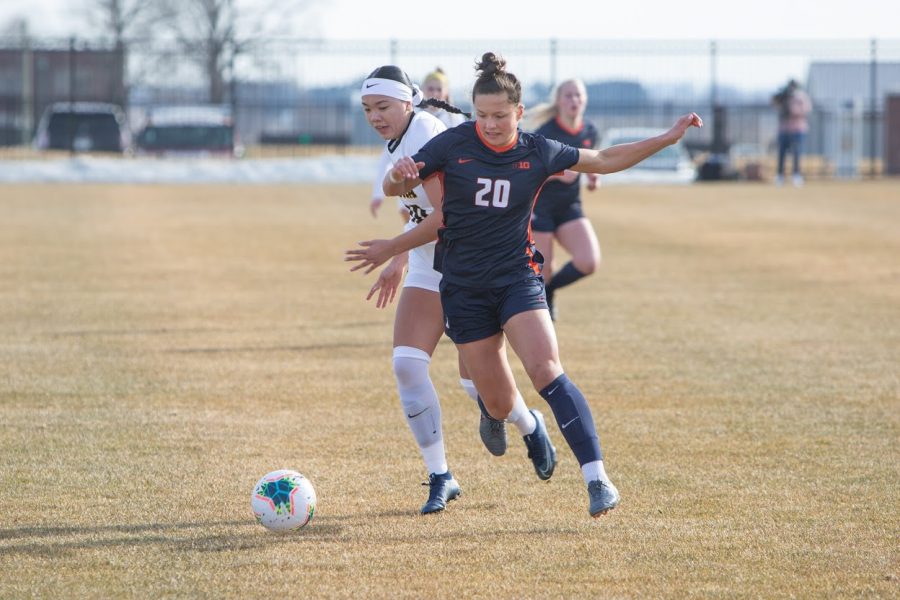 Junior Makena Silber battles for control of the ball during the game against Iowa on Feb. 25. The Illinois soccer team drew against Minnesota on Sunday.

On Saturday in Minneapolis, Minnesota soccer took 23 shots in total compared to Illinois’ two. After a full 90 minutes and double overtime, the result came out to a scoreless draw between the two.

Illinois goalkeeper Sami Sample had a great game and came in clutch for the Illini. While she faced 23 shots, only nine of them went on frame, and all nine of them were saved.

However, this isn’t the only time Sample has come out big for Illinois. Last week against Penn State, Sample faced a goalkeeper’s biggest nightmare, a penalty kick. There’s a 50/50 chance of it going in or getting saved.

While the Illini lost that match, Sample came out huge with a diving save to her right, keeping Penn State at bay with only two goals.

Against Minnesota, it was as if Sample had to face a never-ending shooting drill.

Minnesota went into the game coming off a 2-1 win in overtime against Northwestern. This entire season, the Gophers have kept throwing shot after shot at their opponents, which continued into the game against the Illini.

Gopher midfielder Katie Duong gave Minnesota their first real chance on goal in the 10th minute, as she took a shot from distance. The ball sailed towards goal, but right into Sample’s hands.

In the 38th minute, Gopher forward Makenzie Langdok took a shot on goal on her left foot. Sample pushed it out and midfielder Eileen Murphy was able to clear it.

By the end of the first half, Sample had made four saves for Illinois. Although both the Illini and Gophers were putting pressure and going at each other hard, Minnesota was dominating on the field.

Illinois was only able to get one shot, coming in the second minute. A common problem that has been happening in the past several games is the connection between the midfield and lone forward Makena Silber.

Minnesota got more in shots on the Illinois goal in the second half, but they were less consistent getting them on frame.

The Gophers took ten shots in total but forced Sample to only make two saves in the second 45 minutes to keep the Illini drawing with Minnesota.

Going into overtime, Minnesota kept playing their game, high pressure and trying to force a shot anywhere they could.

Two shots in the first 10 minutes of overtime forced Sample to push it out to her left. The ball was in a dangerous place, the Gophers didn’t have anyone to get the rebound and the Illini were able to get it out.

The 102nd minute, possibly Sample’s save of the game, saw a shot from Nummerdor from distance, pushing Sample into a diving save.

Illinois continues to struggle when it comes to connecting on the field and leaves it to midfielder Hope Breslin to get something going.

Their strong start to the season is now hitting a slump of being unable to get a shot on frame and creating a full team effort play.

After drawing with Minnesota, Illinois was left scoreless in their past three games, moving their record to 2-2-1. The Illini have a full week until their next game away against Indiana.