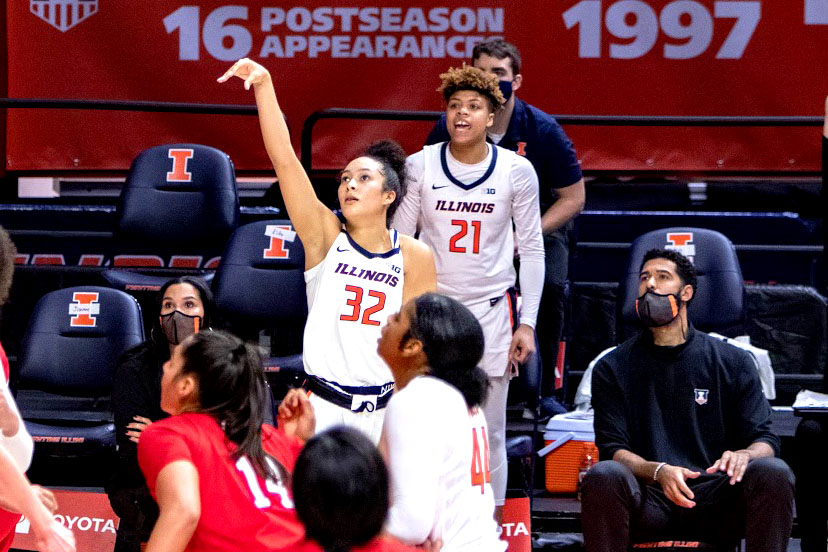 Aaliyah McQueen (21) cheers on Aaliyah Nye (32) as she shoots a 3-pointer at State Farm Center on Jan. 25 against Nebraska. Nye and McQueen share a first name, are from Michigan and have a great bond tied together by basketball.

Two freshmen on the Illinois women’s basketball team share the first name Aaliyah. Further, Aaliyah McQueen and Aaliyah Nye also have a lot more in common. They’re both from Michigan.

Nye and McQueen both played for the same Amateur Athletic Union team — the Michigan Storm Elite — in high school. They didn’t go to the same high school, as McQueen is from Flint — as is Illinois women’s basketball director of recruiting Tianna Kirkland — and Nye is from East Lansing, home to Michigan State.

McQueen and Nye both started playing basketball at an early age. Nye’s mother wanted her to dabble in all the sports — Nye tried soccer, softball and dance, among others — but Nye liked basketball the best. McQueen’s late father introduced his daughter to the game, and she found she enjoyed it.

“My father passed away due to murder, and he was the one who introduced me to basketball when I was about 2 years old,” McQueen said. “So, I decided to just put my all into that and just find something to get my mind off my dad. Then, I ended up just loving the game and loving everything about it.”

“When Aaliyah joined the first time, I didn’t really know her. We didn’t play on the same team,” McQueen said. “About two years later, we ended up playing on the top team together and getting to know her was just like a sister to me.”

McQueen’s and Nye’s families really got to know each other during those years. The players carpooled together, and the families often stayed at the same hotel during out-of-town tournaments.

When it came time for college, both players looked at their options. And while they didn’t prioritize ending up at the same school, they both ultimately decided on Illinois. McQueen committed first, deciding to attend Illinois two months before Nye announced she’d also go to Illinois. But, McQueen was one of the first people Nye told when she finalized her decision.

At college, Nye and McQueen live right across the hall from each other, so they hang out and see each other often. Geovana Lopes and Erika Porter also room with them.

But, Nye and McQueen have their fair share of roommate concerns — Nye said she sometimes has to remind McQueen to take out the trash — but they’re enjoying college and enjoy each other’s company.

“We just joke around a lot,” Nye said. “It’s great to be around Aaliyah. She has good energy. I just love her.”