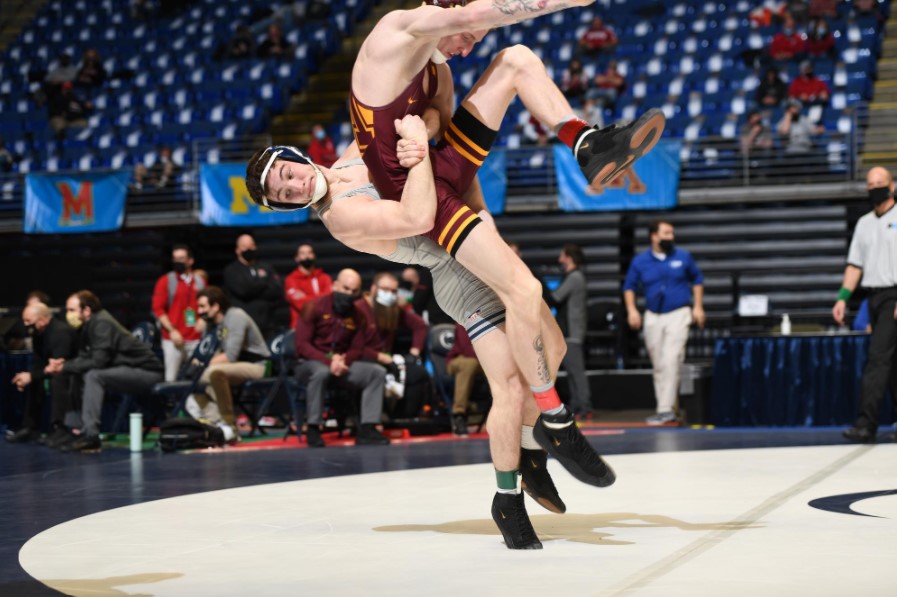 Redshirt freshman Lucas Byrd lifts his opponent off the ground while competing at the Big Ten Championships on Sunday. Byrd placed 3rd in the 133-pounds weight class.

With Penn State hosting the Big Ten championship, it was no “Happy Valley.” The stands were filled with a few parents and cardboard cutouts, creating an eerie championship setting. Combined with a lackluster outing from his program, Illini head coach Jim Heffernan will probably want this trip to be wiped from his memory.

“I think everyone is disappointed,” Heffernan said. “There is a certain standard we wrestle to, and we didn’t meet them very much.”

After a productive regular season, knocking off three ranked programs, the Illini took a step back this weekend, finishing 11th out of 14th in the Big Ten tournament, casting doubt whether the program can have a successful outing in the NCAA tournament.

The Illini finished the regular 5-3, with no losses coming by the hands of unranked teams. But in State College, Illinois’ big names struggled to keep up with the Big Ten’s most elite wrestlers, although redshirt freshman Lucas Byrd had himself a weekend.

Competing in the 133-pound weight class, Byrd came into the weekend with a 7-1 record, although that still wasn’t good enough for a first-round bye. Still, the freshman excelled on the mat and nearly made the championship round.

“I feel like I should’ve been in the finals,” Byrd said.

Byrd was never really challenged over the weekend, besides for his lone blemish against Iowa’s Austin De Santo, the eventual runner-up of the conference tournament. Byrd kicked things off right on the mat with a first-round pin, followed by a large margin of victories over his fellow Big Ten rivals, including an 8-0 victory over Purdue’s Jacob Rundell.

Byrd finally met his match with De Santo, however, who was able to hold off the Illini product by the slimmest of margins — 5-4.

While the loss eliminated Byrd from taking first place, the setback did little — if anything — to lower his intensity. With a third-place bout against Northwestern’s Chris Cannon on deck, Byrd had a simple message for his coaches.

Byrd outdueled his in-state rival, taking third place home after a convincing 7-1 decision. Byrd credited his hand placement, his ability to ride on top and his strength in the victory, and the meet only confirmed what he already believed about himself.

“This is what I do,” Byrd said. “ I’m not surprised. I knew coming into the Big Ten I could be a contender to win the conference and the NCAA tournament at some point. It’s not a shock I made it. It’s just reassuring.”

While Byrd has virtually clinched a spot in the NCAA tournament in a couple of weeks, his Illini counterparts struggled to emulate his success over the weekend.

Redshirt sophomore Danny Braunagel, who finished the regular season with a 6-0 record, struggled out of the gate for the Illini at the 165-pound weight class, a sign of things to come for the Illini.

After receiving a first-round bye, Braunagel was upset by Nebraksa’s Peyton Robb, who took control and defeated the sophomore in a 9-5 decision. Braunagel would go on to lose his next match against Michigan State’s Jake Tucker before bouncing back to win his final two matches.

After finishing the regular season flawlessly, Braunagel left the Big Ten tournament with a ninth-place finish.

One hundred forty-one-pound Dylan Duncan had an inconsistent weekend, who finished with a pair of major victories before stumbling to a 3-2 overall record. Johnny Mologousis, who competes at the 157-pound weight class, only went 1-3, but his one victory over Indiana’s Luke Baughman was impressive, as he defeated him in a 17-2 fall.

Overall, besides Byrd’s performance, no athlete from Illinois finished above the seventh place, which placed the Illini 11th overall in the conference. Iowa easily took home first place, followed by Penn State and Nebraska, respectively.

“We need to fight,” Heffernan said. “If we get punched in the mouth, we need to punch back.”

The Illini now awaits for Tuesday to hear which wrestlers will be selected to compete in the NCAA tournament in a couple of weeks.