Illinois falls to Michigan in Ann Arbor, bounces back against Michigan State in East Lansing 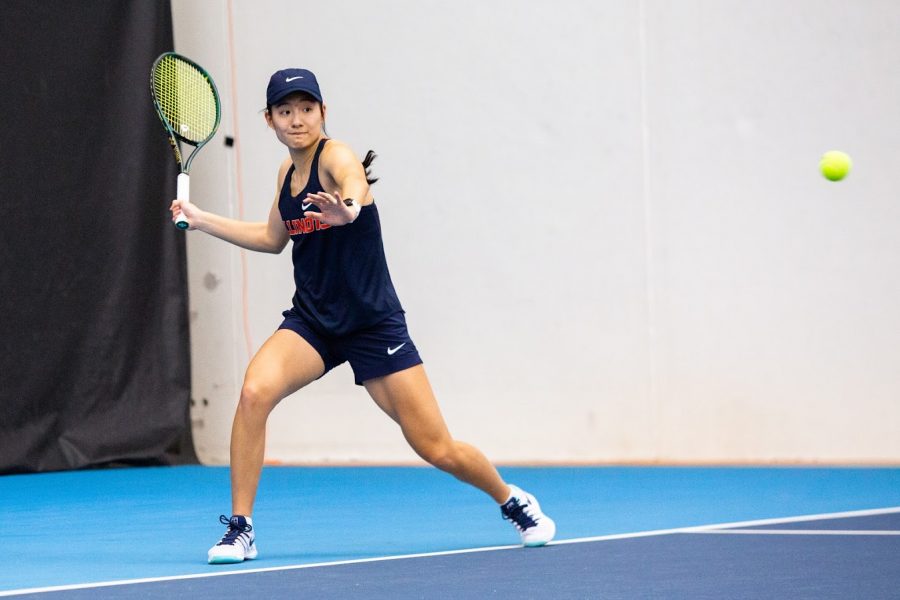 By Will Payne, Contributing Writer
March 8, 2021

The Illinois women’s tennis team took a trip up north to the state of Michigan for a Big Ten doubleheader this weekend. The Illini began the weekend in Ann Arbor Saturday, where they took on the joint-best team in the conference, Michigan.

Michigan dominated in singles, winning on courts two, four and five to seal the victory. Meanwhile on the doubles courts, the tough results continued for the Illini, as they lost on court one (7-5) and three (6-4), moving to 1-5 in conference play this season.

Head coach Evan Clark was disappointed with the poor result in Ann Arbor, but he understood Michigan has been a force to be reckoned with so far this season.

“We felt like we had some chances in doubles and let that slip away and just couldn’t really capitalize or convert on some of the opportunities we had against Michigan,” Clark said. “But, they’re the best team in the conference, so we knew that was going to be a tough matchup on the road.”

On Sunday, Illinois traveled an hour south to East Lansing to face off against the Michigan State Spartans. The Illini bounced back with a resounding 4-2 away victory, moving to 2-5 on the year.

Illinois got off to a great start, as doubles teams Asuka Kawai and Josie Frazier, along with Ashley Yeah and Kate Duong, won their matchups. When the competition switched to singles, the momentum continued for the Illini. Sophomore Josie Frazier clinched the win for Illinois with her 7-5, 6-4 victory against Michigan State’s Tia Mukherjee.

Freshman Kate Duong, who won both her singles and doubles matchups, was proud of the team’s performance, emphasizing the team’s quick and necessary change in attitude going into the second half of their weekend doubleheader.

“We came in with more of a calm mindset and with the mindset that we were going to win today,” Duong said. “We decided we were going to give it all that we had, and it was evident today that we collectively played a lot better.”

Illinois will come back home to Atkins Tennis Center for its next competition against Iowa and Nebraska this upcoming weekend. The Illini begin play on Saturday at 11 a.m. central time against the Hawkeyes, and they continue on Sunday at 11 a.m. versus the Cornhuskers.