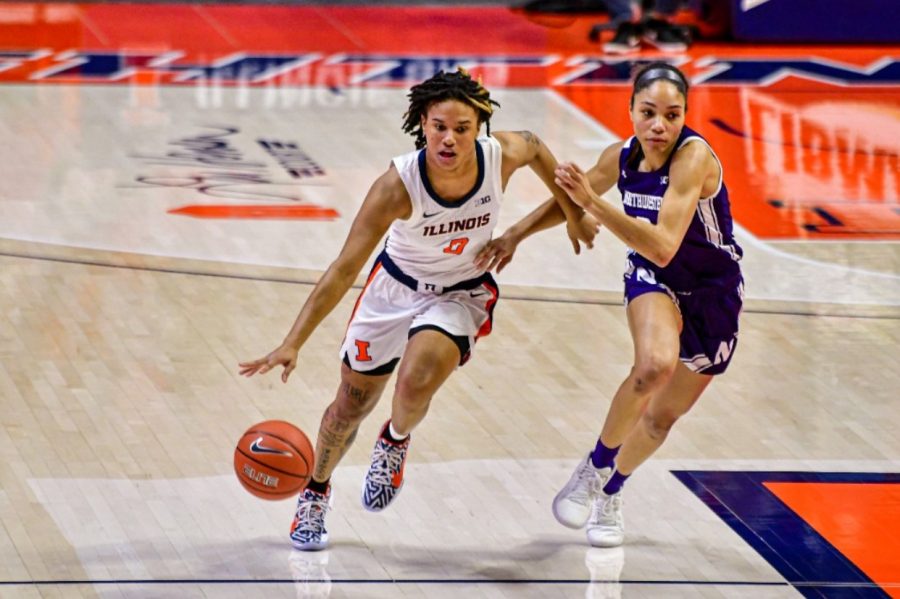 Junior J-Naya Ephraim pushes forward towards the basket during the game against Northwestern on Feb. 24. The Illini will play Northwestern again if they beat Wisconsin in the first round of the Big Ten Tournament.

The Illinois women’s basketball team sits at the number 12 seed heading into the Big Ten tournament and will face Wisconsin in its first-round matchup.

This year will look a little different, as only 13 teams will compete in the tournament due to Ohio State’s self-imposed postseason ban.

This upcoming game will be the Illini’s second time facing the Badgers this year, and they’re hoping to see a different result. In the first meeting, Wisconsin defended their homecourt well thanks to a dominant second quarter.

The Illini received a great offensive outing from sophomore guards Jeanae Terry and Jada Peebles. The duo combined for 43 points, though the rest of the team only scored 14 points.

The Illini are coming off of a senior night win against the Golden Gophers. In that game, the Illini offense carried the way. A balanced scoring attack saw nine Illini get on the scoresheet, while three players finished in double figures. A similar formula will likely be needed against the Badgers.

Wisconsin runs a pack-line defense that attempts to limit drivers and force teams to shoot threes. In essence, it has worked.

The Badgers have allowed the third-most 3-pointers in the Big Ten, but their defense still ranks towards the bottom of the conference.

The offense has been a big struggle for the Badgers, especially turnovers, as they rank last in the conference in turnover margin. The Illini have had their fair share of struggles keeping the ball clean, but they have done a good job their last two outings taking care of possessions.

“A lot of times we turn the ball over where it’s ‘should I pass it should or should I not pass it?’” Terry said. “So, just being confident in who you are and knowing if you’re the person to score or not.”

The Illini also has a size advantage inside. Wisconsin relies on wings and guards more heavily than Illinois, and thus it may be a big game for redshirt junior center Eva Rubin. After some early-season struggles adapting to playing on a new team, Rubin has stepped up recently, scoring in double figures against Purdue and Minnesota.

“I think we have a pretty good mismatch inside. I told Eva today to make sure she stays in the ball game,” Fahey said. “We’ve done a lot of feeding the post drills and sending different actions at the post. We’ve been trying to give our guards the different looks we might run into.”

Sitting at 4-17, the Illini will need to win the conference tournament if they have any hope of playing in the postseason, an uphill battle to say the least. If Illinois wins, they will face Northwestern, which it has yet to beat in two tries this season.