Illini baseball comes away from opening weekend with one win, three losses 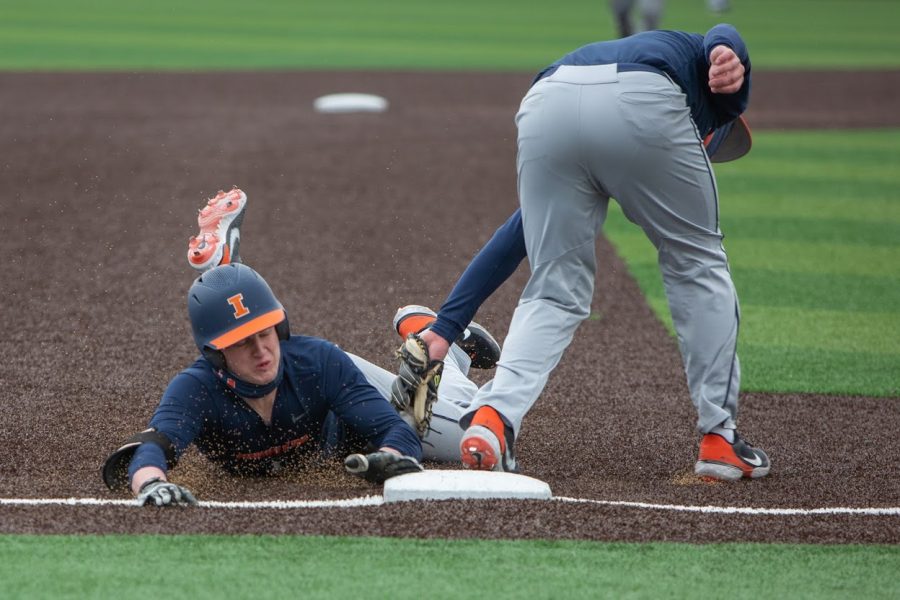 The Illinois baseball team took the field for the first time in 362 days over the weekend, playing a four-game series against Ohio State down in South Carolina. While tight games went in favor of the Buckeyes early in the weekend, a Sunday shutout (8-0) gave the Illini their first win of the season.

Finishing the weekend 1-3 wasn’t the plan for the Illini, but head coach Dan Hartleb and his guys were just happy to play competitive baseball and get a few tough games under their belt.

“It felt good, especially since we haven’t been on the field for a long time,” said sophomore pitcher Cole Kirschsieper. “Even when we first got out there, you can see all the guys were excited to be out there. We’ve been working since the time we ended last season to now, and it just feels good to get back out there with the guys and compete at a high level.”

Kirschsieper recorded the team’s only win over the weekend, allowing just one hit through five innings while striking out six batters. He held the Buckeyes scoreless in conference play for the first time since April 20, 2018. The righty continued his strong freshman campaign, where he went 3-0 and notched a 1.35 ERA.

“Going into the game I felt good,” Kirschsieper said. “When I was warming up, it felt good. Then, I could just feel throughout the entire game; my stuff was there. My off-speed, my curveball, breaking was working.”

Illinois’ hitting was much improved on Sunday, as Justin Janas led the team, going 3-for-3 including an RBI and two runs scored, all while recording his first career hit. But, the scoring began with leadoff batter Taylor Jackson, who hit a double in the first inning, followed by RBIs from Branden Comia, Cam McDonald and Ryan Hampe.

“(Sunday) obviously felt better because we won, but everybody was just loose and playing their own game,” said sophomore Danny Doligale. “And, I think we just have to do that every game. When everybody’s just playing loose and being themselves, I think everybody’s better off.”

While the Illini lost their first three games, each had promising moments. John A. Logan transfer, Andrew Hoffman, started on the mound Friday and pitched a strong six innings in his Illinois debut. The right-handed pitcher allowed just two runs and four hits while striking out eight batters.

Friday’s game went 13 innings, meaning the Illini had to go deep into the bullpen, but sophomores Ryan Kutt and Nate Lavender, who pitched three and two innings, respectively, looked composed as well, as neither allowed a run.

Illinois was working from behind all game, as Ohio State scored one run in the first, but hits from sophomore Brody Harding, Jackson and junior Kellen Sarver led to a one-run answer in the third. The teams traded runs in the fifth inning before the Buckeyes scored one in the seventh, and the Illini scored one in the eighth, leading to extra innings.

Ultimately, Ohio State exhausted the Illini bullpen, putting up three runs in the 13th inning, as Illinois struggled to capitalize on baserunners in the ninth and 12th innings.

“(Hoffman) is gonna keep us in games,” Hartleb said. “He’s very competitive. He’s a guy that can compete with anyone in the country. I thought he did a very good job, and he gave us an opportunity to win. We just couldn’t get a run pushed across Friday.”

Saturday’s double-header resulted in another pair of Illinois losses (6-5, 12-6). Junior pitcher Riley Gowens made his Illinois debut in the first game after missing his first two seasons with injuries. Gowens held the Buckeyes to three runs on six hits through 3.1 innings.

While the Illini got their bats going early in the second game on Saturday, scoring four first-inning runs, junior pitcher Ty Rybarczyk gave up eight runs to the Buckeyes in the second inning, and the deficit was too large to come back from.

Saturday’s games did highlight some key offensive contributors for Illinois, as McDonald went 4-for-9, including four RBIs, two runs and a double. Jackson went a solid 4-for-8 on a double, a walk and two runs.

For Hartleb, the competitive weekend highlighted the team’s biggest struggle: lack of experience.

“The biggest thing that I noticed was we have two freshman classes,” Hartleb said. “You have the true freshman class, then you have the sophomores from last year. Going into things you have an expectation that you have some guys with experience, yet once they get out there, it’s like, ‘Well he was on the mound once or twice last year and it’s like going through their freshman year.’”

Hartleb, Kirschsieper and Doligale all took positives away from the weekend, however, as by the fourth game the entire team was looser and more relaxed. The team’s biggest focus before heading up to Minnesota this weekend will be having a strong week of practice, something Hartleb didn’t see prior to the Ohio State series.

“We need to get better this week. That was the message to the guys afterward,” Hartleb said. “I thought we improved today, and we did a good job. I was very pleased with our focus today. Sometimes when you start out and you’re struggling, some team or some guys will give in. I thought our guys had great energy, great focus today, and they showed me a lot.”