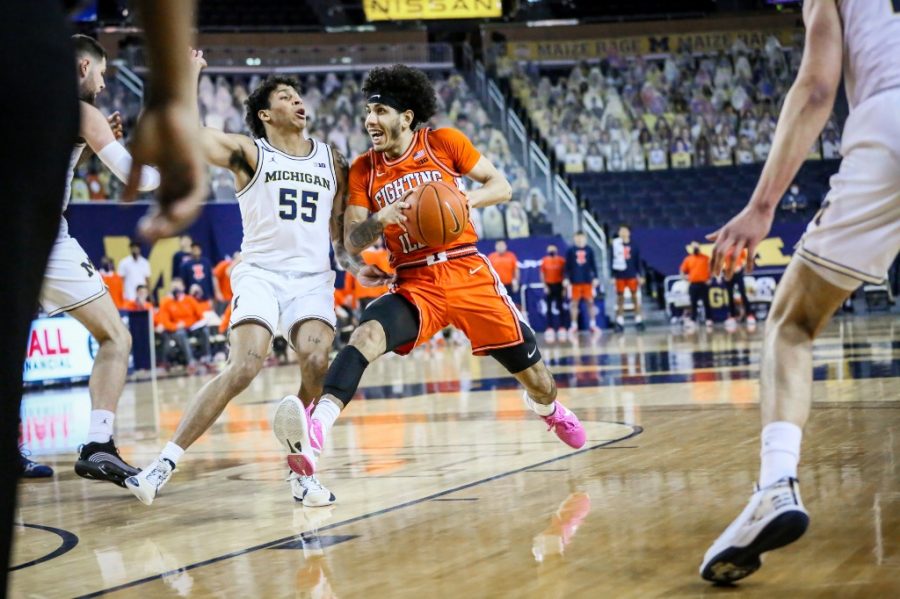 Freshman Andre Curbelo rushes past a Michigan defender during the game on March 2 at Ann Arbor. Curbelo is this week’s Illini of the Week.

Heading into Ann Arbor to take on then-No. 2 Michigan, Illinois seemed due for a loss. The Wolverines were hot, winning seven straight games leading up to the contest, and they had a perfect record at home.

To make things more difficult, Illinois star guard and National Player of the Year candidate Ayo Dosunmu was out with a “facial injury.” But, in his absence, freshman guard Andre Curbelo stepped up. The Long Island native torched the Wolverines, going for an efficient 17 points on 8-14 shooting.

Despite the game being an ESPN-broadcasted top-five matchup, the freshman was unfazed. In high school, he starred on that same network against national powerhouse Sierra Canyon, erupting for a triple-double. His breakout game this season came against then-No. 2 Baylor, also an ESPN game. Curbelo’s lack of fear and preparedness for the big moment is a unique trait.

“He’s always ready,” head coach Brad Underwood said after the Michigan game. “He’s got FIBA experience. He’s played against older guys. He’s got zero fear and so much confidence. He’s got so much charisma. But yeah, he was in go mode, and he went.”

Dosunmu made his return in Columbus on Saturday, putting Curbelo’s role in doubt. The on-ball opportunities and usage would certainly decrease, but Curbelo came off the bench and found a way to immediately impact the game. On one of his first touches, he split a ball-screen and got Kyle Young into the air with a ball fake. From there, he placed a perfectly timed pass to a cutting Jacob Grandison for a dunk.

Curbelo finished the game tied for a team-high in points (19) and team-high in assists (six), while registering just two turnovers. To Underwood, this late-season surge comes as no surprise.

After a surging start to Big Ten play, Curbelo hit the freshman wall a bit. After scoring 15 points at Penn State in December, Curbelo averaged just 5.5 points per game across the next 10 contests, highlighted by consecutive games without a bucket against Wisconsin and Nebraska. Teams figured out that Curbelo was a pass-first guard and tried to turn him into a scorer, something that befuddled the freshman. He also shot 0-9 from deep in that ten-game stretch.

Dosunmu’s absence turned out to be a positive for Curbelo, who found his strides offensively. He’s averaging 15 points per game in his last five, including the career-high 19 on Saturday.

Curbelo’s offense will be key for the Illini in March. Underwood knows what he’s getting from Dosunmu, Kofi Cockburn and Trent Frazier, but that fourth piece of the puzzle is crucial. Despite his mid-season struggles, Curbelo still turned in an impressive season for the Illini.

On Tuesday, he was named the Big Ten All-Freshman team, as well as eaning the Big Ten’s Sixth Man of the Year award. This impressive final week of the season should leave an imprint on voters and give Curbelo the confidence to sustain that level of play heading into the postseason.