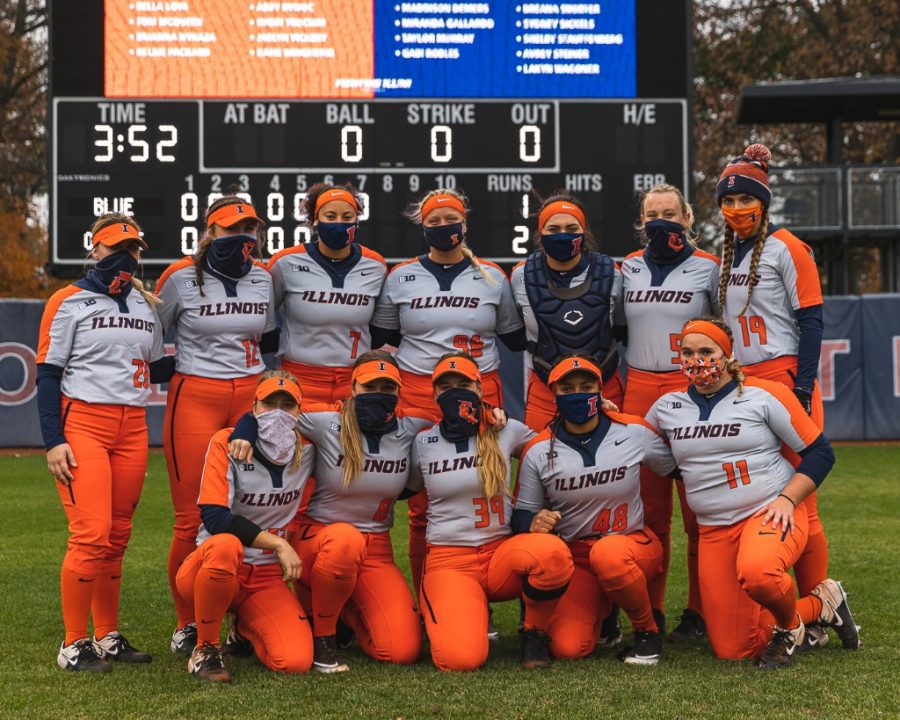 Members of Illinois Softball’s Team Orange pose for a photo during the 2020 Orange & Blue World Series on Oct. 25. The Illini are currently in Florida set to play a series against Michigan State and Penn State over the upcoming weekend.

The Illinois softball team is ready to take on both Michigan State and Penn State this weekend, returning to action with six games at Sleepy Hollow Sports Complex in Leesburg, Florida after a week off. The Illini will start their week with a doubleheader against Michigan State on Thursday before playing a closing game on Friday. Illinois will then play three games against Penn State: a doubleheader on Saturday while wrapping up the weekend with a game on Sunday.

At the start of the season, the Illini played three doubleheaders with Rutgers, Maryland and Michigan at the 2021 conference-only campaign in Florida. The team went 2-0 against Rutgers, 1-1 against Maryland and 2-0 against No. 17 Michigan. Illinois is prepared to take on its next opponents, hoping to continue its success as it is on a two-games winning streak.

The Illini finished their first week with a record of 5-1, showing that they are ready to pick up where they left off before COVID-19 struck. Though they began the season later than their conference opponents, the Illini’s hunger to take the field continues to grow, along with their “no-fear mentality.”

Though COVID-19 halted the 2020 softball season, the team is adamant to represent their highest skills, talents and qualities. Each player is ready to step on the field, not afraid of what might happen, building confidence through practice, drills and training. Players expected to have a big impact this season are seniors Bella Loya and Delaney Rummell and junior Avrey Steiner.

Loya went 2-for-2 with a double and the team’s only two RBIs of the game in a win against Michigan on Feb. 28. Steiner, junior infielder, went a combined 6-for-6 in the first two games of the season against Rutgers on Feb. 26 with three RBIs, a triple and four runs scored.

“The unique schedule has allowed for the team to go out to Florida like we did two weeks ago, leave it all there and lay it all out on the line, to then come home exhausted but feeling confident about what we put on the field,” said assistant coach Laura Trout. “We came back to campus and practiced what we needed to work on, recharged, got our bodies back to where they need to be, refreshed and ready to go back out and do it all again.”