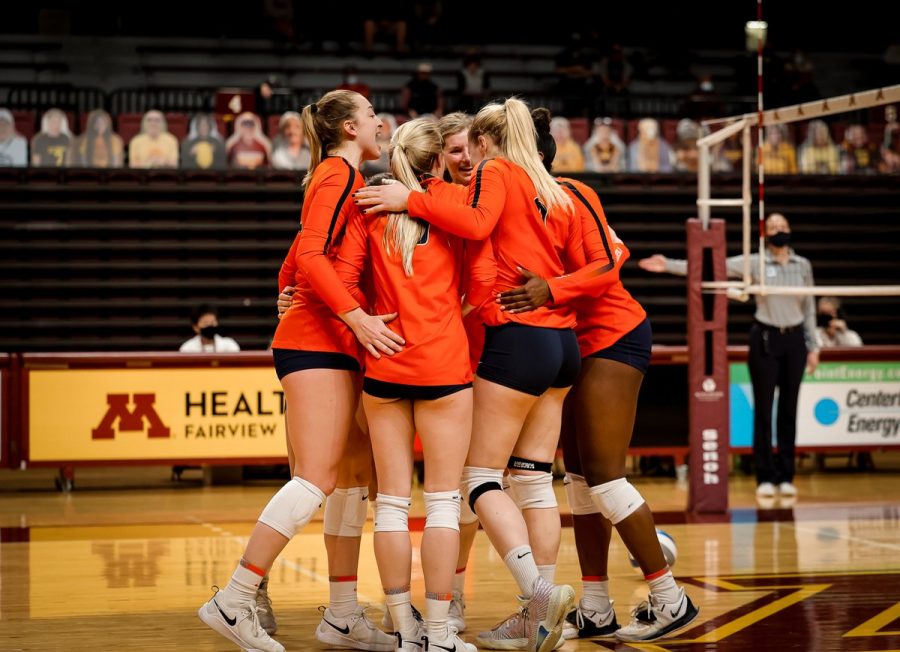 The Illinois volleyball team huddles on the court during a match against Minnesota on March 13. The Illini lost to the Golden Gophers in both matches this weekend.

The struggling Illini came as close as they have in weeks to winning a match on Friday against No. 5 Minnesota. They came out strong initially, narrowly losing the first set but fighting to a dominant 2-1 set lead. Unfortunately, that point early on Friday was the peak of the weekend, as they went on to painstakingly lose the next two matches and get blown out 3-0 on Saturday.

After the weekend, Illinois is now 2-10 on the year, by far the team’s worst record under head coach Chris Tamas. Ten straight Big Ten losses have already eclipsed the team’s previous longest streak of seven losses in 1983.

To even come close on Friday, the Illini ended up posting a bevy of individual records. Megan Cooney, Raina Terry and Kennedy Collins all put up career highs in kills with 21, 20 and 14 respectively. Taylor Kuper put up a career-high 29 digs and Diana Brown also put up a season high in assists, with a gaudy 53 of them keeping Illinois close to the Golden Gophers.

This weekend, Tamas and volunteer assistant coach Jen Tamas both were unable to attend the matches due to COVID-19 contact tracing, so assistant coach Rashinda Reed stepped in as head coach. Under her leadership the Illini maintained focus and fought until the end despite the diminishing results. Reed had been head coach at Northern Michigan University.

Despite the Illini finally achieving what they have been talking about all season, strong play across the roster, the team still came up short. Illinois has tried a variety of tweaks to attempt to score wins, from switching up rotations to running through pressure situations in practice to just about any motivation head coach Chris Tamas can think of. Unfortunately, nothing has seemed to work yet.

An easy argument can be made that the difficulty of Illinois’ schedule is the reason for their losses, as they have now played five consecutive top-12 teams in the country. In order to be a real contender, however, Illinois needs to be able to beat the best teams along with the lesser ones.

Now that the Illini are in such a deep hole, the focus may shift towards developing the roster for next year, and fortunately Friday’s performance displayed growth across the board. Since the rotation switched back to being a 5-1, redshirt sophomore Diana Brown has played phenomenally, and her numbers have gone up across the board. Last week, she said her blocking was something she wanted to work on, and the results were already evident on the court this weekend.  Brown had four and two block assists on Friday and Saturday respectively.

Across the roster, development can be seen everywhere, as Terry has continued to play like a future star, and with yet another passing week, she’s put up another career high in kills. Both Collins and Rylee Hinton have shown considerable development on the court this season as well. Collins has put up great offensive numbers like her 14-kill performance on Friday while Hinton has stepped up majorly on the block, averaging 1.28 blocks per set.

The longest losing streak in Illinois volleyball history is 17, so even if the Illini lost their last six matches of the season, they wouldn’t be able to eclipse it. The Illini will finally have an easier matchup next weekend at Maryland, who is 3-10 on the year so far.