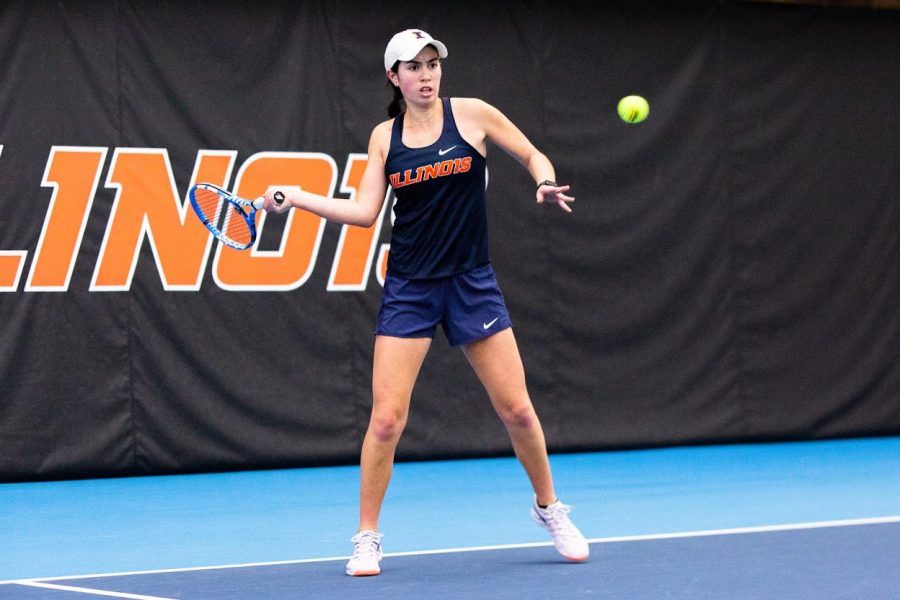 Freshman Kate Duong returns the ball during a match against Wisconsin on Feb. 26. Illinois will face Iowa today.

After an up-and-down doubleheader in Michigan last week, the Illini sit at a 2-5 record.

They hope to build some momentum back on their home courts, as head coach Evan Clark is happy to have his team back in Urbana.

“It’s good timing,” Clark said. “We just have not played at home very much, and we’ve been great on our home court over the last three or four years if you look at our record.”

The Illini begin their match-up on Saturday against the Hawkeyes. The two teams previously met earlier this season in Iowa City on Feb. 12, where the Hawkeyes were victorious 4-2. Iowa currently sits with a record and will prove to be a tough opponent for Illinois.

On Sunday, Clark and his team will continue their weekend against Nebraska. The Cornhuskers will arrive at Atkins Tennis Center at 6-2. The last time both teams met was on Feb. 14 in Nebraska territory, but Illinois failed to get a victory, losing 5-2.

Both Iowa and Nebraska are around the top of the Big Ten standings this year and will certainly be a challenge for Illinois. However, Clark is confident the team will compete well come this weekend.

“We know we’ve been close in a lot of matches,” Clark said. “And to be close is one thing, but to win is another thing, so I certainly think it’s going to pay off and put us over that hump.”

Both weekend matches will start at 11 a.m. central time.