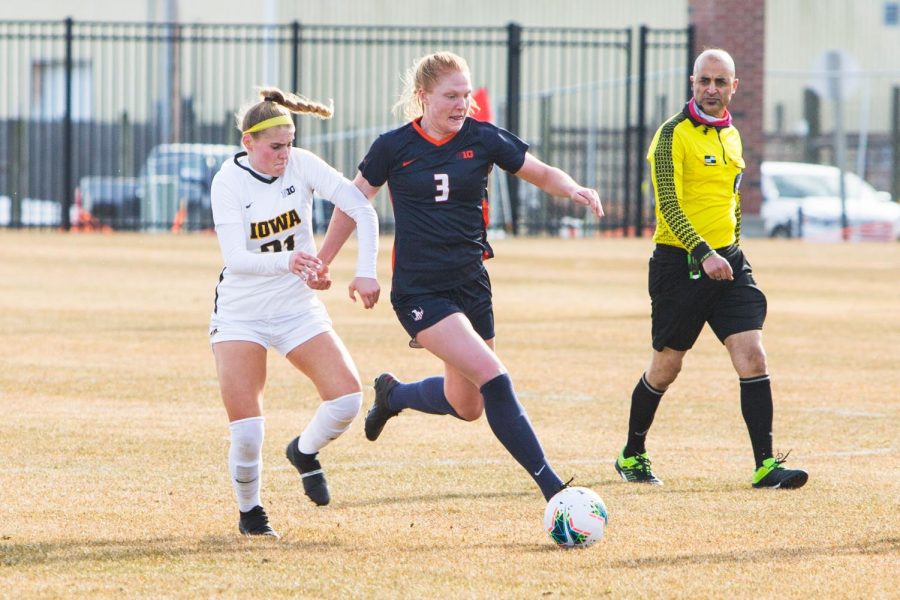 After going three games without a goal, Illinois grabbed a win on the road at Indiana 1-0.

“Any time you can get a shutout on the road and three points, you’re excited about that,” said head coach Janet Rayfield. “Happy to see us get back on the winning side.”

The Illini went into the game struggling offensively in their last three games. While goalkeeper Sami Sample and her defense stood tall, midfielder Hope Breslin and her attack came up short.

Rayfield credits her defense on locking down the opposition, but names freshman Joanna Verzosa-Dolezal as a crucial part as to why the defense has stepped up.

“Our defense has been great, but I think today Joanna Verzosa-Dolezal made a huge step,” Rayfield said. “This step forward that she took, not just in playing, but organizing our defense and really starting to take a leadership role in our backline and that’s pretty special for a freshman.”

What we saw against Penn State, Wisconsin and Minnesota was an Illinois offense that had strong players, but could not combine their abilities on the field to create chances and later shots on goal.

Rayfield hoped the offense could turn it around against the Hoosiers and the Illini did just that.

“I think we played a little bit better in terms of possessing and attacking half, but we’ve also focused on our ability to be dangerous on restarts,” Rayfield said. “Our services have been great, and we’ve had some close opportunities on restarts and finally put one away.

As always, Breslin, the heart of the Illinois team, kept her momentum and determination throughout the entire 90 minutes. Although pushed around a couple times, it did not stifle her game.

The first chance from Illinois came in the seventh minute after Breslin took a long shot outside the box, but it was a comfortable save for the Indiana goalkeeper Bethany Kopel.

With the offense pushing up, it allowed the defensive fullbacks to get in on the action. A minute after Breslin, a cut back from Kendra Pasquale to Ashley Cathro, she laid a curling shot that was saved by the fingertips of Kopel.

Going into halftime the game stood 0-0, but Illinois had a much better first 45 then they usually have.

Heading into the second half, the first five minutes started with a Hoosier chance but ended with an Illini goal.

In the 49th minute a freekick to Illinois saw Aleah Treiterer serve a deep cross into the box. A leaping Eileen Murphy headed the ball into the ground to bounce past the fingers of Kopel. The goal broke Illinois’ scoreless streak and caused an eruption of cheers on the sidelines and field.

“Eileen (Murphy) is fantastic in the air and a great target for us,” associate head coach Jeff Freeman said. “We knew that Indiana defended somewhat zonally on their restarts and probably weren’t going to match up with her (Murphy) or mark her up.”

Forty minutes left in the game and the Hoosiers kicked it up a gear in order to put it level. Again, Sample was put to the test to keep the Illini only on the scoreboard, but she kept it calm, cool and collected, racking up seven saves.

The last five minutes were the most important for Illinois to contain possession and not let Indiana get a shot off.

A Hoosier freekick in the 88th minute, almost proved to be fatal for the Illini. Served into the box and bounced past many players, someone could have gotten a touch in, but it just skipped past Sample’s post.

Illinois’ next game will see them back home in Champaign to go head-to-head against Nebraska.