Illinois win against Iowa, lose to Nebraska in action-packed weekend 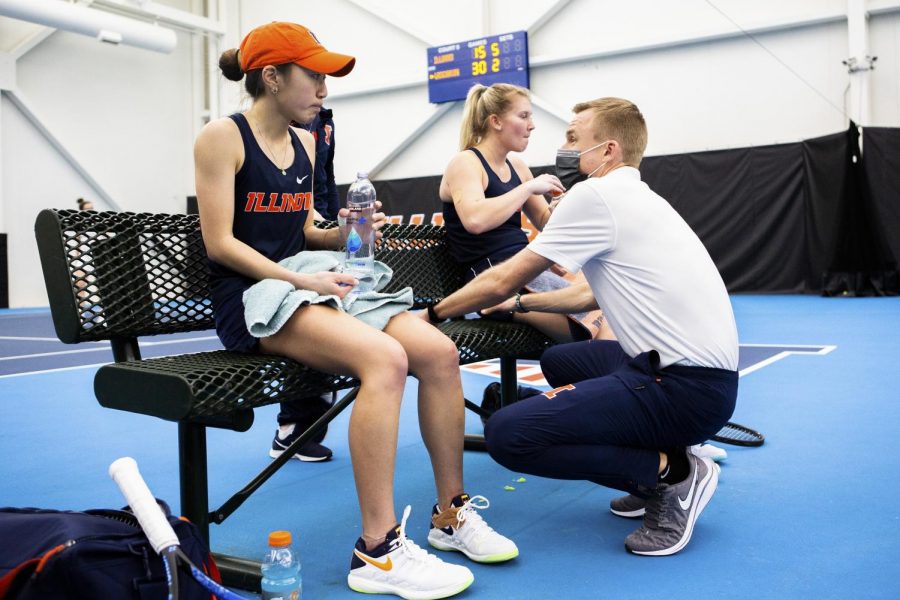 Women’s head tennis coach Evan Clark checks on Emilee Duong and Sasha Belaya in between a match against Wisconsin on Feb. 26 at Atkins tennis Center. Clark was impressed by his teams performance against Iowa over the weekend despite losing to Nebraska on Sunday.

The Illinois women’s tennis team was back in action this weekend against Iowa and Nebraska in a Big 10 doubleheader at the Atkins Tennis Center. The Illini came into the match play at 2-5 on the season, coming off a loss against Michigan and a win versus Michigan St. during the previous weekend

Illinois began their play Saturday morning against the 6-2 Iowa Hawkeyes, who have emerged as one of the strongest teams in the Big 10 this year.

Duong gave credit to head coach Evan Clark and her teammates for helping to motivate her whenever she faced controversy during the match.

“We had a meeting before in the locker room saying we have to fight with a lot of grit, a lot of heart and energy,” Duong said. “So I brought all three of those things with me to the court, especially in singles.”

Although Illinois dropped two out of the three doubles competition, they ended the day victorious 4-3. Coach Clark was happy with his team’s performance, especially as the Illini lost in Iowa City earlier this season to the Hawkeyes.

“It was good all around,” Clark said. “Obviously to get a little revenge and to show how much we’ve grown in this month. I think that was the biggest thing for us.”

Moving on to Sunday, the Illini faced off against the 6-2 Nebraska Cornhuskers, another solid opponent from the Big 10 Conference.

Illinois were on the other side of a nail-biter this time out, as the two teams split the wins during the singles competition. However when it came time for doubles, Nebraska was victorious in two of the three matches, eventually winning at the Atkins Tennis Center by a final score of 4-3.

Even though Sunday’s effort by Illinois came up short, coach Clark was proud of the team’s performance and took many positives from the second day of the doubleheader.

“I was really pleased with the way we played and fought,” Clark said. “We eked out some tough matches down the stretch and kind of got that monkey off our back of winning big matches that we were not able to do earlier in the year.”

Next weekend, Illinois are back in Urbana for another Big 10 doubleheader. This time, they welcome the Indiana Hoosiers and the Purdue Boilermakers to the Atkins Tennis Center.

The match against Indiana will begin on Saturday at 11:00 a.m. central time, and the match versus Purdue will start on Sunday at noon central time.