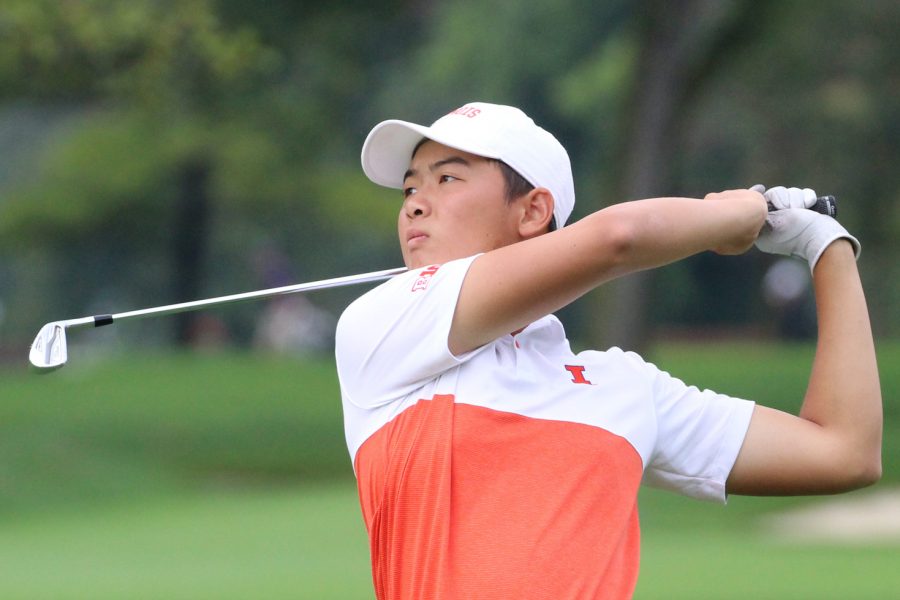 Jerry Ji completes a swing during the Illinois Golf vs. OFCC in Champaign, IL on Sept. 22, 2019. Ji got his first career win at the Louisiana Classics tournament, and the Illini came in first place overall.

Led by sophomore Jerry Ji, the No. 4-ranked Illinois men’s golf team won its third straight tournament at the Louisiana Classics in Lafayette.

The Illini’s score of 823 broke the record for the lowest score in Louisiana Classics tournament history. In addition, they set tournament records for the lowest individual round score, 268, and largest stroke victory, 38.

Ji got his first career win and tied the Louisiana Classics tournament record with his score of 203. The record was set by Illinois alum and PGA Tour golfer Thomas Detry. Ji finished in the top 20 three times last year and was named Big Ten Freshman of the Year.

“Jerry is improving,” said head coach Mike Small. He’s working hard on his game. I thought he saved shots with his short game better than he has been. His golf swing is getting really good; he’s been working on it. He played from strength all week, and he didn’t flinch.”

The Illini led throughout the tournament, doubling their lead after each round. Feagles and Ji started off hot and stayed that way. They finished the first round tied for third and never fell below fifth. Tadiotto, Kuhl and Dumont de Chassart struggled at first, as they sat in 20th, 35th and 44th, respectively, after the first round. However, they finished strong in “the most important round” and secured spots in the top 10.

“This is how you want to finish out tournaments,” Small said. “The last round of a team golf tournament is the most important round, and you’ve got to close it. We went into it with a lead, and you have to go into it with the mindset to still shoot the lowest score; you don’t protect…To shoot 20-under on that golf course — it’s a tricky golf course — you have to be in control of your game, and we were.”

Feagles continues to build his case for the Haskins Award after being named a finalist last week. Only one golfer has bested Feagles this year and that was his own teammate, Jerry Ji.

Ji already held the Illinois program record for the lowest individual round score, 63 (-7), going into the tournament. He set that record in the first round of his first collegiate tournament last year but has been unable to find that same success until now. His lowest round score this week was 66.

The Illini’s depth was on full display, and after this record-setting outing it is likely we see them move up the ranking for the third straight week. The Illini haven’t won four straight tournaments since 2015, and they’ll have the opportunity to do just that at the National Invitational Tournament in Tuscon, Arizona this weekend.