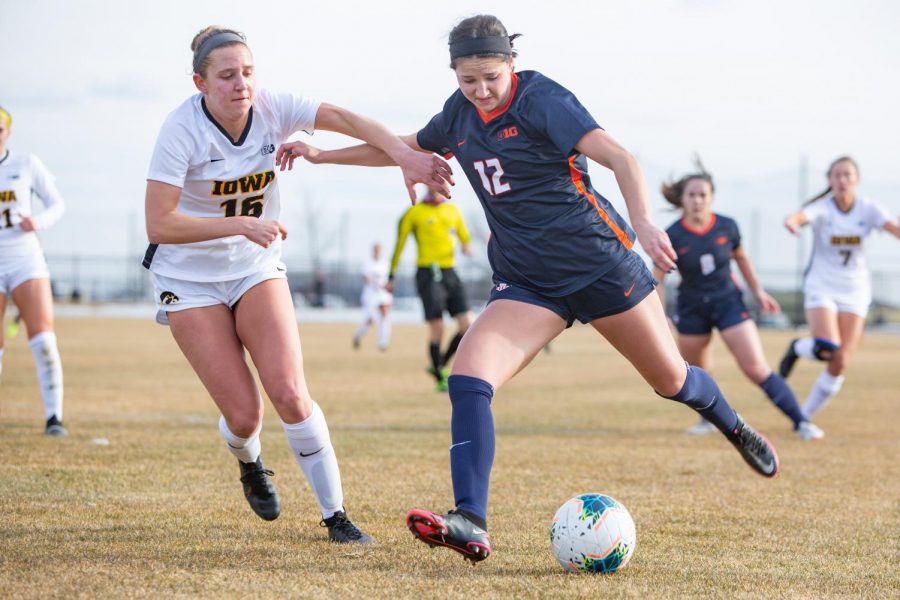 An extra week of winter struck in Champaign, Illinois as temperatures were hitting the 30s with added rain. The cold and pouring downfall caused the Illinois versus Nebraska game to be postponed to Friday morning.

However, the postponement didn’t prove to be a problem for the Illini. On a sunny Friday morning at Demirjian Park, Illinois dominated over Nebraska earning a 3-1 win.

The Cornhuskers started off the morning with the first goal on the scoreboard. Two minutes after Nebraska’s first chance of the game, Dakota Chan got a shot off at the edge of the box to roll past goalkeeper Sami Sample in the eighth minute.

A quick turn around from kickoff, the Illini almost answered back to the Cornhusker goal. Within three passes Hope Breslin took a touch and sent a long shot hitting the crossbar.

In the 14th minute, Breslin spotted Kendra Pasquale making a run and sent a pass to her. Knocking it off her defender, Pasquale was able to get a break away on goal slotting it past the Cornhusker goalkeeper putting them level 1-1.

While the Illini were down a goal, still early in the game they did not let it faze them.

“I think it was really important for us after that first goal to keep our head up and respond in the next five minutes,” Pasquale said. “Right off the bat, Hope Breslin had a great shot so I think just making sure that we didn’t get down on ourselves and we realized that we had a lot of time left so we could control that game. So I took a moment and felt the chance and decided to pounce on it and it clearly paid off.”

Later in the 38th minute, Pasquale found Makena Silber with a through ball, who was able to slot in another behind the net to put Illinois 2-1 against Nebraska.

Going into halftime, Illinois looked to have controlled the game after the first goal from Pasquale and then sealed it with Silber. This is only the second time this season that the Illini have had more shots against their opposition in the first half.

The story used to be that the Illinois defense and Sample were the ones leading the pack and stopping shots from coming and going into goal. This time around, the offense took the spotlight and helped connect, get shots off and two goals in the first 45 minutes.

In the second half, the Illini got the ball rolling immediately. A nice one-two on the left side between Summer Garrison and Ashley Cathro allowed Cathro to get a cross in the box. Breslin was able to get a head on it leading to Maggie Hillman in the six yard box to tap it past two Nebraska defenders.

During the 54th minute of play, Breslin was taken down in the Cornhusker box after a pass from Silber. She fell to the ground with pain in her right knee and there were no signs of her getting back up. A couple minutes later, she was helped up by trainers and brought to the sidelines only walking on her left leg.

“We’ll really have to get her in the training room to see what the long term effects are,” head coach Janet Rayfield said. “She got a knock on her knee and doesn’t look to be serious, but we’ll see what the prognosis is for Sunday. I don’t think it’s anything we’re worried about from a season perspective, but Sunday is a short turnaround.”

For the remainder of the game Illinois did not stop the pressure. Five out of their six shots after the 54th minute of play were on goal not giving Nebraska a break.

Overall, the Illinois offense came out to play and it showed in the scoreline and statistics. While going down a goal, the Illini did not stop fighting and were able to get it back on track.

“I think we solved the problem,” Rayfield said. “As the game went on, we started to realize where the spaces were, and you know if we could play quickly around their  pressure, they come hard, they come sliding in.”

Pasquale said that today’s win against Nebraska was a team win. Everyone was seeing eye to eye and the connections that were not visible in Illinois’ earlier games could be seen this time around. In every play the Illini, many players had a foot in it rather than just one person.

Illinois’ next game will be on Sunday against Ohio State in Champaign.