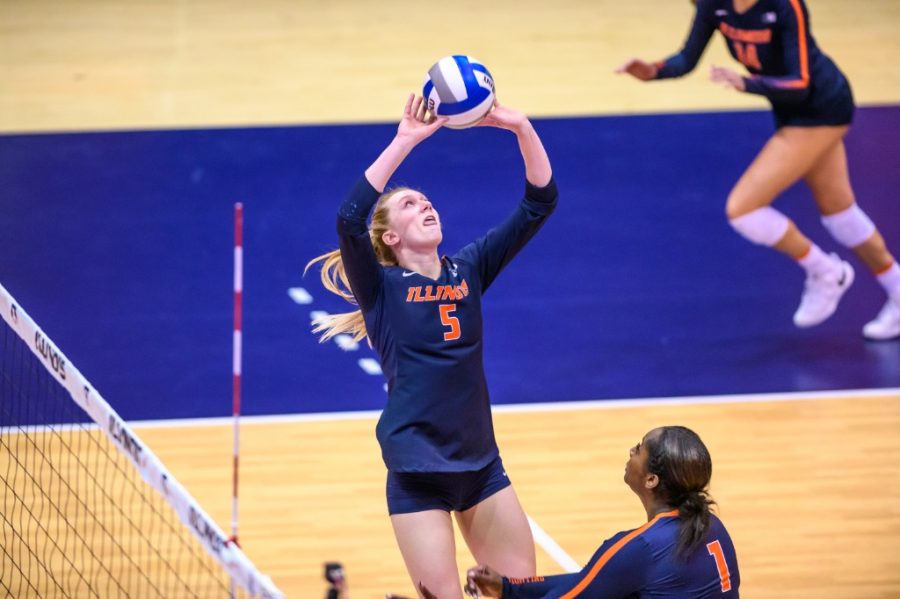 Diana Brown sets the volleyball for a teammate in the game against Nebraska on March 5. The Fighting Illini hope to break their losing streak this weekend as they are scheduled to play against 4-10 Maryland at Huff Hall.

A flustered Illini squad will look to end their losing streak this weekend when they host 4-10 Maryland at Huff Hall on Friday at 7 p.m. and Saturday at 5 p.m. With the losing streak hitting ten matches, by far the longest of head coach Chris Tamas’ tenure, Illinois’ goal for the season has shifted from hopes of an NCAA tournament run to just trying to make it to the end of the season with a few more wins.

There are, to be fair, a lot of reasons for the losing streak. They’ve played five top 10-ranked teams in a row, and according to redshirt sophomore Diana Brown, the Illini have had the toughest strength of schedule in the nation. On top of their schedule, the Illini have been without breakout redshirt freshman Ellie Holzman, who went down early in the season with a torn ACL, which had major ramifications.

Early in the season, the team seemed lethargic in the first set of matches. Tamas placed an emphasis on it, and they improved. Then, the problem seemed to be getting multiple players to have strong outings on the same night.

In that respect, Illinois seemed to break through last Friday night at Minnesota. Megan Cooney, Raina Terry and Kennedy Collins all put up career-highs in kills, while Taylor Kuper posted a career-high 29 digs. Despite finally achieving the widespread strong play they’d worked toward all year, the team blew a 2-1 set lead and, in the process, exposed potentially the team’s largest problem: finishing matches once they’re ahead.

“We are really hungry for that win, but we’ve found sometimes that when you just want to win, you get that tension in your body where you feel that you have to make the most perfect play,” Brown said. “(You think) this has to go perfectly, (but) no (it doesn’t). Chris talks about (how) volleyball is just a string of good plays. You might have a great play here and there. You might have a below-average play here and there, but on average, volleyball is a string of good plays. We just need to be really good at the good plays.”

Tamas has attempted to simulate pressure situations in practice, but the team still hasn’t broken through in that respect yet. While Tamas has done about all he can volleyball-wise, the team has been trying to work on their mental games and find added motivation to break out of their funk.

“We really talked about effort and attitude,” Brown said. “That’s always a constant in our program, but can you get the negative thoughts out of your head of being 2-10? We might not have played our best on Saturday. Can you get those negative thoughts out of your head and come into the gym, and as soon as you step on the floor, can you be the best version of yourself? We’ve been talking a lot about the mental place where you are. We’ve been talking a lot about being (mentally) where your feet are.”

To Brown, being where her feet are has taken on a special meaning.

“What it means to me is (to) just be present,” Brown said. “Don’t think about anything that happened in the past or what could happen in the future. Obviously, you want to train the best you can to influence the future, but that’s going to come. You can learn from the past, but that’s already happened. You can’t change it. You can only learn from it. We’re also talking about each rep; you can’t take it for granted. In the fall, we would have done anything to play.”

According to Brown, the team has had a couple of team meetings this week where they’ve iterated the importance of their mentalities. In the meetings, the seniors on the team supposedly reflected on the end of their collegiate careers and asked the team to help them end as strong as possible. With just three weeks left, there will be limited opportunities for the Illini to show their growth.

Moving forward, the team has focused its efforts on preparing for Maryland. At 4-10, Maryland may be Illinois’ weakest opponent they’ve faced in weeks. Both Tamas and Brown have mentioned, however, that the Big Ten is too competitive to discount anybody.

The biggest question heading into the weekend will be who’s coaching on the sidelines, as last weekend Tamas was out due to COVID-19 contact tracing. Assistant coach Rashinda Reed acted as head coach in his absence. Tamas mentioned he’s expecting to be on the sidelines on Friday but isn’t certain. Tamas has not been back in-person with the team yet.

“You can look at records, but we have talked about not letting our record tell the full story,” Brown said. “We don’t pay attention to records, so going into Maryland, maybe they are working on some things, but on any given night, any team can beat another team in the Big Ten, so that’s why you play the game.”