Illinois snaps losing streak with pair of wins over Maryland 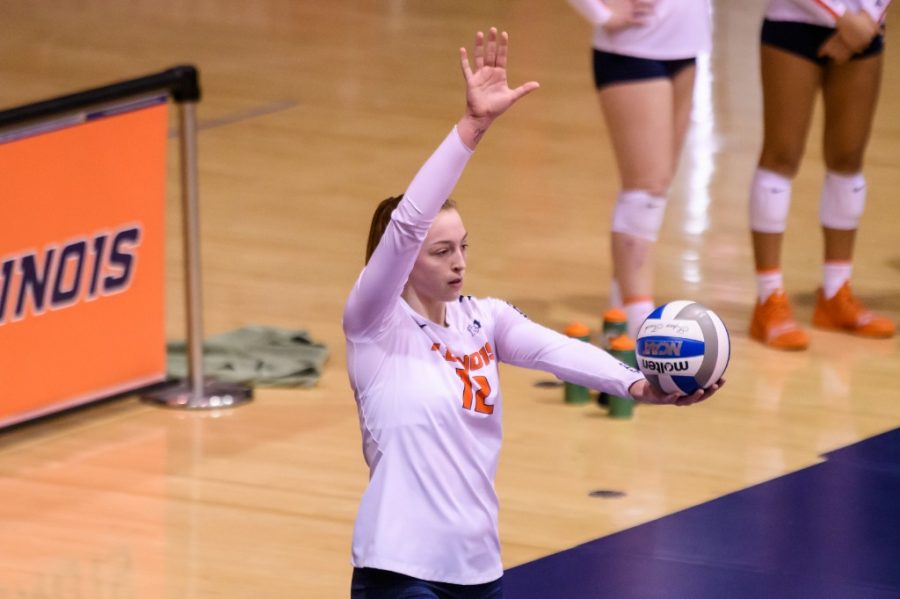 Raina Terry starts her serve during the game against Ohio State on Feb. 19. The Fighting Illini beat Maryland on Friday and Saturday ending their 10-match losing streak.

For the first time since Jan. 23, the Illini won a volleyball match. While enduring a 10-match losing streak was a painstaking process, the team has finally come out the other end with a pair of wins over Maryland behind dominant performances from Raina Terry and Bruna Vrankovic.

“I don’t think there’s any other words for it other than it feels amazing,” Terry said. “It feels good to know that even after our losing streak, we still have it in our tool belt to come out and fight and give it everything we’ve got to just pull out a win like that. It feels amazing.”

The weekend provided a much more accurate look at what the Illini might look like next season, as star senior Megan Cooney was out for an undisclosed reason. In her stead, both Terry and Vrankovic got the lion’s share of the touches. Both players put up career highs in attempts and kills, with Terry and Vrankovic posting an astounding 23 and 18 kills, respectively, on Saturday.

“Honestly, I don’t think (Cooney being out) really impacted a whole bunch. I mean we knew that we were down another player, but we still came in with the same mentality to just come out and fight with everything we’ve got. We knew that just because we didn’t have her that someone was going to have to step up to the occasion, and honestly I think we all stepped up to the occasion, it was all of us.”

While there were contributions across the roster, Terry had a heavy hand in Friday’s streak-breaking win in which she had an absurd career-high eight service aces. Both Friday and Saturday’s matches ended with kills from Terry. With new career-highs seemingly coming every week, she seems to be quickly growing into a cornerstone for the Illini program.

“She’s stepped up in a huge way this season,” said head coach Chris Tamas. “She’s been taking lots of quality swings. It’s not easy to go and play six rotations in this conference. A lot of times it takes players years to figure that out, and she’s doing that in a very short period of time. She’s been really impressive in terms of figuring stuff out as the match goes on. If they take away one of her shots, she’s good at coming up with a new one or using a different one in her toolkit. It’s not easy being in the passing rotation, and she’s a killer from the service line as well, so good to see all those things coming into play.”

While Tamas was certainly happy to finally come away with some wins, he’s put a big emphasis on player development. With such a young roster, there’s been growth everywhere. This weekend especially, it seemed as though Vrankovic and Alyssa Eske both made jumps.

Eske, often touted as a big energizer on the team, put up 12 and eight digs on Friday and Saturday, respectively. Since the rotation shifted from 6-2 to 5-1, she’s been called on consistently as the only defensive specialist on the roster other than libero Taylor Kuper.

“I’m just super proud of how they’re battling every single day,” said Tamas. “It would have been easy to wait three weeks for the season to be over, but this group continues to fight, and we talk a lot about coming in and giving your best every day. I think we’ve been doing that, and it showed this weekend.”