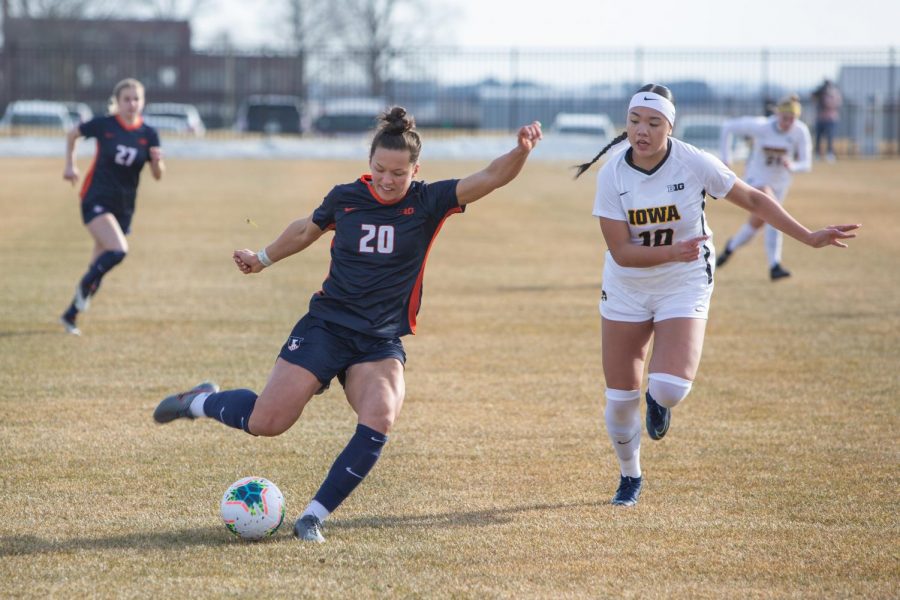 Junior Makena Silber begins to kick at a game against Iowa on Feb. 26. The Illinois women’s soccer team fell short on senior day and lost to Ohio State 2-1 on Sunday.

Parents in the stands, almost near perfect weather for soccer and coming off a 3-1 win against Nebraska, Illinois was on track to have another strong game against Ohio State. However this was not the case, the Buckeyes came back from one goal down to defeat the Illini 2-1.

Demirjian Park had some spectators in the stands for the first time this season marking it a first for parents to see their daughters play in person rather than over a stream.

“It was such an amazing feeling,” Kendra Pasquale said. “We’ve really missed having all our families and parents and just people in general watching us. So it really gives us energy because having the people who we love here cheering us on is even more of a fuel for us.”

The first half was an equal game between both teams. The Illini and the Buckeyes controlled possession at times, but neither team could break deadlock and get the ball behind the net.

Both had their chances with Ohio State taking seven shots and getting two on goal while Illinois took nine and put three against the opposing goal.

The Illinois offense kept their strong momentum throughout this game as Pasquale led the attack. Offensively the team was stronger, as they were being first to every ball as well as put the pressure on the Buckeye defense. The pressure led to several mistakes that the Illini had a chance to pounce on, but were unable to put them away.

Going into halftime the first 45 minutes ended scoreless between the two.

Starting off the second half, the Illini were in control. A foul against Ohio State was called right at the edge of the goalkeeper box in the 50th minute. Hope Breslin with the free kick on goal narrowly missed by hitting the left post.

Illinois’ next chance came two minutes later on a corner. A short pass to Pasquale allowed her to dribble in the box muscling past defenders for a shot into goal making the score 1-0.

The next 12 minutes were all Illinois and used the momentum from the goal to try and get another in the Ohio State net.

In the 65th minute the Buckeyes got their chance and after a failed clearance from the Illini defense and took the opportunity. A combination of three passes from a couple of Ohio State players put them on the path to the goal. Kayla Fischer beat the last Illini defender in her way and slotted past Sami Sample putting them level.

Ohio State did not stop there. Nearly a minute and half later after their first goal, they had a corner. After the ball was pushed away Izzy Rodriguez got to the ball first and took a shot passing a sea of white and red jerseys to go into the back of the net putting them up 2-1.

“Soccer is a game of few opportunities and the team that puts them away is victorious and Ohio State did that today,” head coach Janet Rayfield said. “They certainly get some credit for getting and going at our backs. They’re relentless in that way and they finished two opportunities.”

For the remainder of the game, Illinois did not put their heads down. They were searching for the response to the Buckeyes to at least put them level leading to overtime.

In the 78th minute, Silber had a chance to get Illinois level. A miscommunication in passing between two defenders led to Silber taking advantage of the opportunity. Running at an awkward angle to shoot, the best she could have done was a toe poke, which was easily saved by the Buckeye goalkeeper Bailey Kolinski.

After the full time whistle Ohio State took the victory on senior day in Champaign, Illinois 2-1.

“We played some of our best soccer today,” Pasquale said. “We really trusted each other and had some great opportunities. I mean we had 20 plus shots on goal, which has been such an improvement from last week.”

Although going home with a loss Rayfield was proud of the display her offense put out. A couple of weeks ago the Illini could only muster two shots and now they had a season high of 23.

Unable to find the back of the net with that many chances, the team will need to work on finishing their chances in order for not another game like Ohio State to happen again.

“What makes a great Big Ten soccer (team) is somebody who can play consistently, have a steady defense we’ve had all year and can couple that with the offense and can we add a little finishing,” Rayfield said. “If we do that then some of our moments we played today was as good as any team in the Big Ten. If we can find that over long stretches of time, we can beat anybody in this conference and to be honest, anybody in the country.”

Illinois’ next game is on Thursday Mar. 25 away against Michigan.