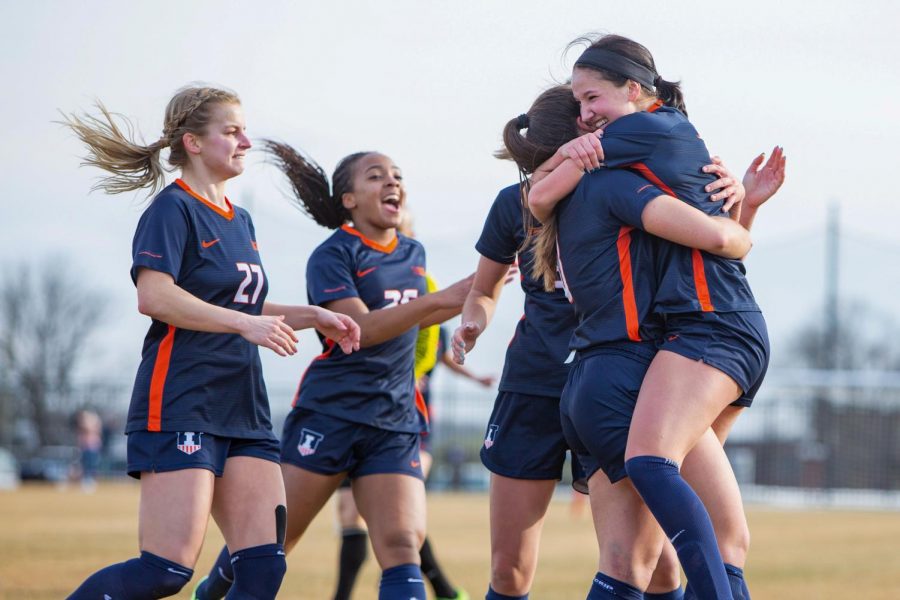 The Fighting Illini women’s soccer team embraced during a game against Iowa on Feb. 26. The team continues to keep their momentum for upcoming games.

As the regular season winds down, the last home game for Illinois (4-2-1) is coming up on Sunday afternoon against Ohio State (2-1-3). Seniors for both the Illini and Buckeyes will be recognized prior to the game.

While the Illini still have a couple more games on the road and postseason, it’s more of a thank you rather than goodbye for the class of 2021.

“It’s a little bit different senior day,” said head coach Janet Rayfield. “We want to make sure that this isn’t a ‘hey, it’s your last game.’ It’s really a ‘thank you for what you’ve done over the last year to guide us through this really challenging time.’”

Since Demirjian Park is under construction and due to COVID-19, fans have not been permitted in the stands to watch the games. However, for senior day, the athletic administration has allowed each senior to have two family members come to Champaign.

Prior to the game, families will be able to join in on Zoom during the team’s pregame meal. They will have a chance to talk with their daughters about their accomplishments and join in when honoring them in a safe and socially distanced way.

In addition, family members who are able to come down to Champaign will be able to sit in the stands and watch their daughters play their final home game. Usually, families would be able to walk their daughters onto the field, but due to COVID-19 protocols, it is unable to happen.

Heading into the game, Illinois is coming off a 3-1 win against Nebraska, as Kendra Pasquale, Makena Silber and Hillman all got on the scoresheet.

After full time against the Cornhuskers, the Illini were a much improved team offensively. After a lack of goals, shots and connections in previous matches, which hurt Illinois a lot, the defense and Sample helped keep them afloat in the Big Ten.

This time around, the Illini utilized the strength of their offensive six to get in the Cornhusker half. Breslin used her vision, passing ability and grit, which led to goals from Pasquale and Hillman.

Pasquale even got a hand in the assists, as she was able to pick out Silber with a perfectly timed through ball to get her a goal.

Looking at the Buckeyes, their last game against the Purdue Boilermakers was on Thursday. They drew one all, with both teams escaping with a point.

The Illini will have to look out for Buckeye Emma Sears, as she is a player who is not afraid to take shots. She has currently taken 23 shots in total, with 14 of them on goal. Sears also has tallied four goals under her name, including a hat trick against Wisconsin.

While Sample may not have had much of an action-packed or save-after-save game against Nebraska, she might be called on to prevent Ohio State from getting one in the back of the net.

As for the offense, they have turned things around and are steadily getting better. After two games into changing their offensive play, Illinois must continue their momentum and play smart to keep improving and seal another win.