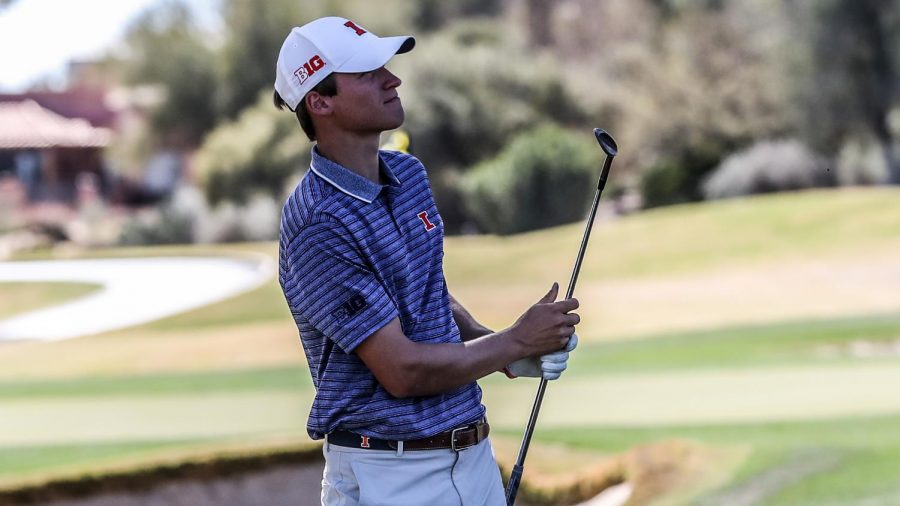 Junior Adrien Dumont De Chassart smiles after completing a swing during a match. The Illinois men’s golf team tied for fifth at the National Invitational Tournament in Tucson, Arizona on Sunday.

“Adrien is playing really well, and he has been working really hard this spring, so I’m happy for the strong play that he has been having,” said head coach Mike Small.

The tournament took place over two days, with the first two rounds on Saturday and round three on Sunday. Senior Giovanni Tadiotto sat atop the leaderboard after round one, accompanied by Dumont de Chassart in the top five.

In round two, Dumont de Chassart eclipsed Tadiotto and took hold of the lead himself, while Tadiotto fell to seventh. Despite having two golfers in the top ten, a poor start from the rest of the team left the Illini in fourth place after the first day.

“We got loose with some of our shots in the middle of the day — at the end of the first round and the beginning of the second — and we lost some ground there,” Small said. “Adrien and Giovanni were really strong from start to finish. Those guys played from strength all day, and that carried us.”

The tournament featured heavy competition, including 10 of Golfstat’s top 50 rated golf programs and 19 of their top 100 ranked collegiate golfers.

Tadiotto finished tied for 12th. His opening round score 66 was just one stroke off his career best.

Senior Michael Feagles struggled out of the gate, posting a team-worst first round score of 73 (+1). The Haskins Award finalist ended round one tied for 58th before battling back into the top 25 in round two.

“We didn’t make as many putts as we would normally like to make,” Small said. “It’s a great field, and a good golf course with different conditions in a different part of the country, so there are a lot of positives to take.”

Feagles finished the tournament tied for 17th with a three-round score of 210 (-6).

After the final round, three Illini sat in the top 20, a good result for most programs but underwhelming for the streaking Illini.

“It was a disappointing finish to a really solid couple of tournaments,” Small said. “Guys played well. We just didn’t close like we have to, and it cost us a couple of spots. But, all-in-all, it was a positive week; we’ve got a lot of things to work on and build on.”