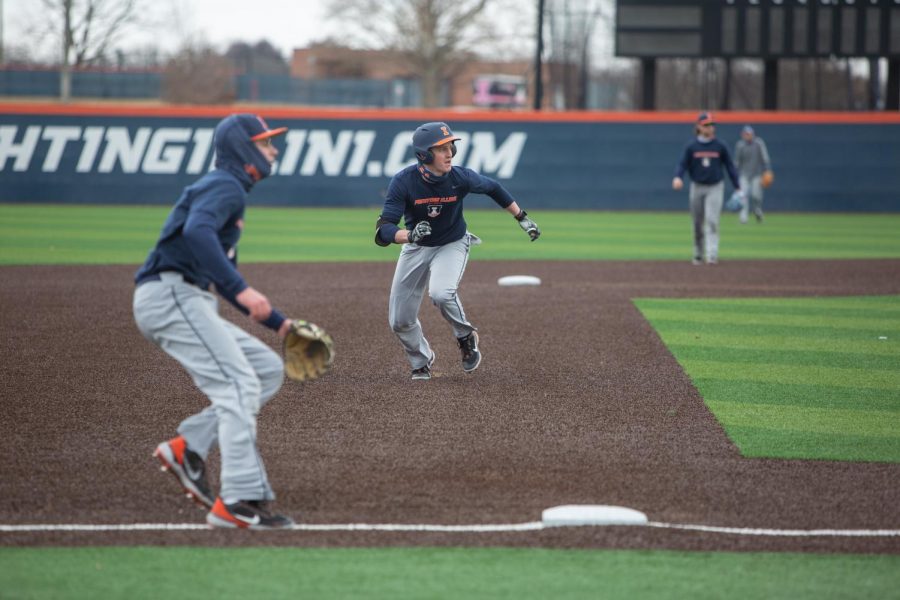 Senior Jackson Raper sprints to third base during practice on Feb. 26. The Illinois baseball team won and lost a game against the University of Michigan as well as suffering another loss against Michigan State in Ann Arbor this weekend.

Illinois traveled to Ann Arbor this weekend facing both No. 13 Michigan and Michigan State in a four-game series. This weekend’s pod opened with strong batting performances in a 7-4 win over Michigan Friday, before dropping both games on Saturday 8-1 against Michigan again and then Michigan State 11-0.

In game one of the weekend, tied 3-3 at the top of the 8th, sophomore catcher Ryan Hampe got the ball rolling with a double. After a sacrifice fly from freshman Justin Janas that brought Hampe home, sophomore Branden Comia followed with an RBI double putting the Illini up 5-2.

“He (Jackson) turns around the first game this weekend after having a subpar weekend the week before and comes up with a huge game for us,” head coach Dan Hartleb said. “That shows a good athlete that understands some things that they’re doing, makes adjustments, doesn’t let the mental part affect him. I was really proud of him and how he went out and performed after scuffling the weekend before.”

After struggling with his at bats against Minnesota the week prior, Jackson returned to his prominent role as the leadoff hitter, sparking the offense in the third and fourth innings.

Jackson racked in six hits on the weekend striking out only twice in the four game series. After striking out on his first at bat in game one, Jackson stepped to the plate against Michigan’s No. 1 Steve Hajjar.

“I went opposite field on a fast ball by him, and I said  ‘OK, it’s gonna be a really good day now,’” Jackson said. “I started to lock in once I got back to my game, my role as that guy on the team.”

Sophomore Andrew Hoffman battled a cold leading up to his debut on the mound Friday. While his body wasn’t 100%, Hoffman set the Illinois pitching staff on the right path Friday keeping the Michigan offense off balance for most of the contest. Outside of allowing two solo home runs, Hoffman controlled the events of the seven innings from the mound.

After scoring two runs in the top of the fourth, the Illini unloaded four total runs across the field sealing the afternoons victory. Nathan Lavender relieved Hoffman at the top of the seventh, striking out six batters in his three innings on the mound, putting the stamp on the afternoon for the Illini.

“The first inning we had a couple things that we weren’t very clean on but after that we played really well defensively,” Hartleb said. “I thought all in all we had a very consistent, well-played game.”

Friday’s momentum fell short in game one of Saturday’s double header as the Illini struggled to drive the ball to the opposite side of the field. A grand slam in the first put the Illini down 4-0. The Illini’s first and only run of the day came by way of an RBI double from Hampe in the fourth.

With just two innings to rally, Michigan put up three runs in the eighth. Illinois struggled against a duo of strong pitchers in Michigan and Michigan State. Cameron Weston got the start for the Wolverines Saturday morning, allowing only four hits and one run in the top of the fourth.

The Illini grappled with run production throughout Saturday, recording only one run in the two games played.

Jackson, Hampe and Brody Harding all recorded two-hit days on Saturday, while Comia extended his career-long hitting streak to 29 games.

“Typically when we’re not ourselves, we get into some trouble,” Jackson said. “Once we stick to ourselves, be ourselves, everybody buys into their roles and everybody’s playing together as a team and having fun, we are set to win a lot of games. I truly believe in that.

Freshman pitcher Riley Gowens and sophomore Ty Rybarczyk struggled in their starts for the Illini on Saturday, allowing four runs in the first inning of both games. By 3 p.m. the Illini looked to turn things around against the Spartans but came out flat.

Rybarczyk brawled with the Spartans batters but gave up nine runs in 5.1 innings pitched.

“They know when they don’t perform well, there’s no secret,” Hartleb said. “We talked about some things. I tried to challenge them to come out and make some adjustments. We did a much better job of using the middle of the field and doing the things offensively that we didn’t do the day before.”

Like Hartleb had predicted the week prior, the Illini staff’s pitching order was thrown for a loop placing freshman Cole Kirschsieper on the mound Sunday in their second game against the Spartans.

Kirschsieper gave the Illini the strong start they needed, keeping the Spartans at bay through the first four innings, allowing only one run and five strikeouts. The Frankfort, Illinois native kept the focus on the defensive side for most of the contest. The next four innings the Illini kept their staff fresh, allowing Ryan O’Hara, Ryan Kutt and Adam Maldonado to pitch the remaining four.

The Illini shot up to 4-0 over the Spartans in the third after Cam McDonald sent a single into centerfield allowing Kellen Sarver and Comia to score. The Illini went on to score four runs in the third inning and two in the fifth.

The Spartans fell to the Illini 7-3 Sunday afternoon ending the weekend’s pod on a high note, going 2-2.

“We flushed what happened on Saturday when we dropped two,” Jackson said. “We had a lot more fun. We banged the ball around the ballpark that day so it was a really good day to be an Illini.”

Illinois will host their first home series of the season against Northwestern on Friday Mar. 26, heading into the contest at 6-6.