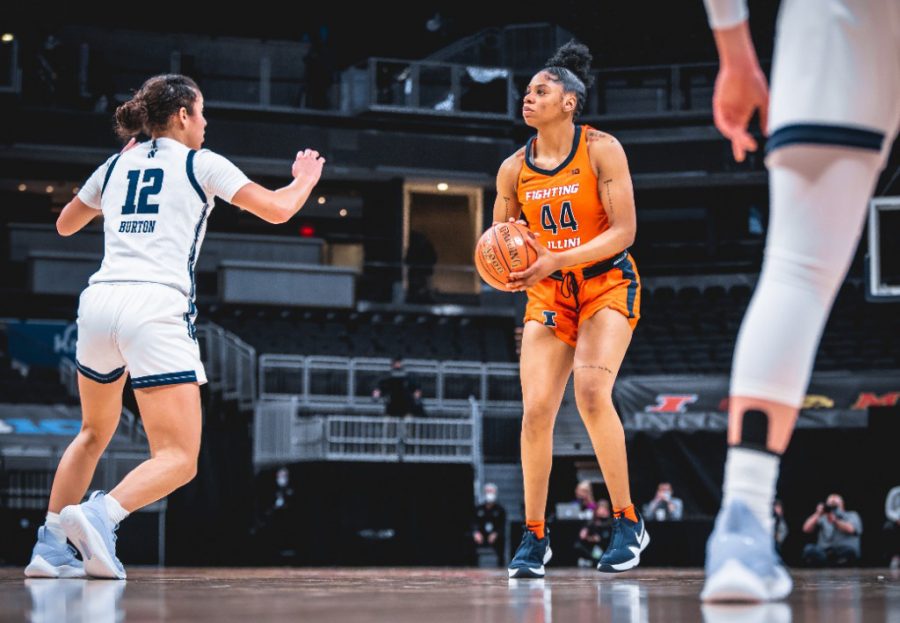 Sophomore Kennedi Myles looks to shoot during game against Northwestern March 10. Though the team suffered many losses this season, the Illini hope to enter the Big Ten Tournament with a higher seed next year.

The Illinois women’s basketball team finished the regular season 4-17 before going 1-1 in the Big Ten tournament. Defeating Wisconsin in the Big Ten Tournament was head coach Nancy Fahey’s first Big Ten Tournament win and Illinois’ only win away from State Farm Center this season.
“It was great because we got Coach Fahey her first Big Ten tournament win,” said freshman guard Aaliyah Nye after Illinois defeated Wisconsin. “It feels great just as a team because we know how hard we work, and this is just the culture that we’re building here at Illinois.”
Coming into the season, the team was very young, as they have just two seniors on the roster: Nancy Panagiotopoulou Andritsopoulou and Lyric Robins. However, Panagiotopoulou is technically listed as a redshirt junior, and both players can return next season since winter athletes were granted an extra year of eligibility due to the COVID-19 pandemic.
Freshmen guards Aaliyah Nye and Aaliyah McQueen and freshman forward Erika Porter recently joined the team. Redshirt junior center Eva Rubin transferred to the program in December 2019 and received a waiver in August to play for the season. NCAA rules require an athlete who transfers from one Division I school to another to sit out a year. Junior forward and center Geovana Lopes joined the team after playing two seasons at Odessa College, and in November, junior guard Tara O’Malley walked onto the team after serving as a team manager for two years.
Illinois played most of its games in conference this season, going 2-1 in the non-conference schedule before spending the rest of the season in Big Ten play.
The Illini began Nov. 25 with a 68-49 win over Indiana State. They then narrowly lost to Valparaiso Dec. 2, 62-59, and would exit non-conference play with a 53-50 win over Nebraska-Omaha.
Illinois began conference play Dec. 10 against Nebraska, losing 78-72. The loss began a 10-game losing streak for the Illini before the team got its first conference win.
Next up on the schedule was Michigan on Dec. 19 and then Southern Illinois on Dec. 22. Both games were canceled due to COVID-19 issues in Michigan and Southern Illinois’ programs.
The Illini closed out 2020 with a New Year’s Eve loss at Indiana, 79-56. Getting a win would be just as difficult at the start of 2021, as Illinois got blown out by Iowa Jan. 3, Ohio State Jan. 7 and Michigan Jan. 10.
Michigan State and Illinois were set to play Jan. 14, but the game was called off due to COVID-19. After a span of 11 days without games, Illinois lost to Northwestern, 73-54, in the first matchup between the teams, which would eventually face each other twice more during the season.
After another string of losses to Nebraska, Penn State, Wisconsin and Michigan State, Illinois picked up its first Big Ten win Feb. 7 against Purdue at the State Farm Center. A 54-49 win, Illinois held Purdue scoreless in the final minute while scoring the last seven points to defeat the Boilermakers.
Illinois wasn’t able to capitalize on this win, losing to Minnesota, Indiana, Maryland and Rutgers before a competitive Northwestern game Feb. 24. The Illini chipped away at their deficit but ultimately the 67-61 loss was Illinois’ narrowest margin of defeat since falling to Penn State by four on Jan. 28.
Illinois also dropped the Purdue rematch, 70-66, after tying the Boilermakers late in the fourth quarter.
But the Illini closed out the regular season on a high note, snapping their losing streak and defeating Minnesota in the regular-season finale, 72-64.
Then came tourney time. Coming into the tournament with a 4-17 record, any outcome other than a championship would almost certainly end the Illini’s season.
First up: a rematch against Wisconsin Mar. 9. Illinois hadn’t defeated the Badgers in over two years, and Fahey was seeking her first Big Ten Tournament win.
The Illini had a much stronger performance against Wisconsin than they had in most of the other games this season, outscoring the Badgers 24-2 in the first quarter. Illinois built on its strong start throughout the afternoon and ultimately went on to win 67-42. Fahey got her first Big Ten Tournament win and was rewarded with a water shower when she walked into the locker room after the game.
It was also the first time the team won consecutive games all season, and they were eager to keep the momentum going.
But the winning streak was short-lived, with the season coming to a close the following day against rival Northwestern. Illinois came close to defeating Northwestern in the second matchup, but the third time was not the charm for the Illini.
Northwestern had a 38-8 lead by the half, holding Illinois to just two points in the second ten minutes. Despite Illinois outscoring Northwestern in the third quarter, the 30-point deficit was too much for Illinois to erase. In a reversal of the previous day’s game, the Illini lost 67-42, bringing their season to a close.
In a season where the Illini found their momentum toward the end of the year, they are seeking to build on it and have a higher seed in next year’s Big Ten Tournament.
“It’s important to get out of the 12 and 13 spot, you know, the 13 out of the (13, 14) because you’re gonna have to play a lot of basketball,” Fahey said after Illinois’ loss in the Big Ten tournament. “So, as we take away from this, it’s like, that’s a good win, but we got to get ourselves in a different position at this time of year.”