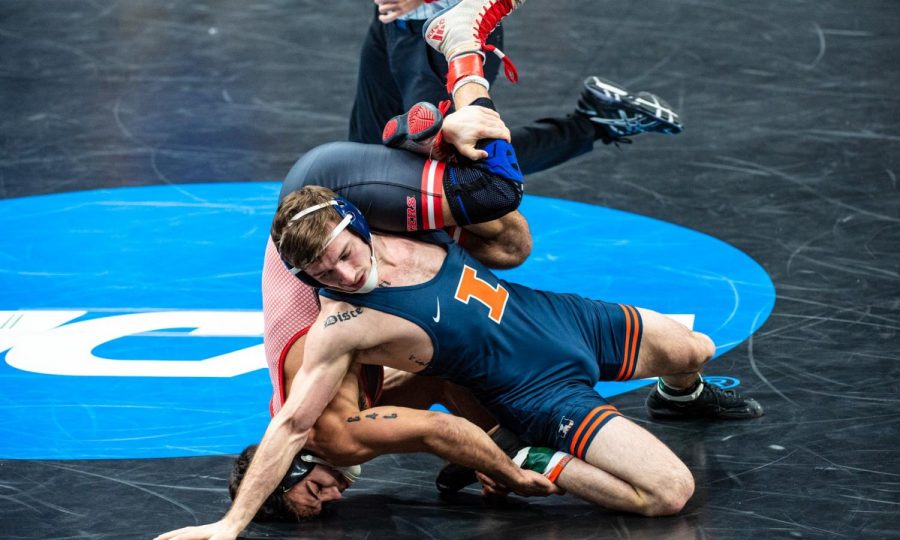 Senior Dylan Duncan wrestles against a man from Rutgers at the 2021 NCAA DI Wrestling Championships in St. Louis, Missouri this weekend. Dylan Ducan and Lucas Byrd tied for fifth after competing with some of the best wrestlers in the nation.

Last year, all spring and winter NCAA championships were canceled due to COVID-19, despite the fact that seven Illini wrestlers were selected to participate. March Madness is filled with multiple tournaments and competitions; the Illini wrestling team had its own chance to compete this weekend for the NCAA Wrestling Championships.

This year’s group had five members of the team — all of whom are ranked in the top 25 in the nation — compete this past weekend in their set weight classes. Lucas Byrd, Danny Braunagel, Zac Braunagel, Luke Luffman and Dylan Duncan represented Illinois in the three-day tournament.

With this being Duncan’s senior year and Byrd’s first time qualifying for the NCAA Championships, this was an opportunity to show why they have been working hard all season.  To end the season, Lucas Byrd was nominated as an All-American after beating Micky Phillippi, along with winning four straight matches on day two of the tournament. Byrd and Duncan both placed fifth after beating Michael McGee and Chad Red, respectively, on the last day of the tournament.

Luffman was the last Illini to compete in the morning matches on the first day, where he faced Wyatt Henderson, losing by fall. Illinois came to Indiana with the intentions to compete at an extremely high level, which is what they did. The Illini may not have left with the championship trophy, but they placed fifth place, meaning they must adjust next year.