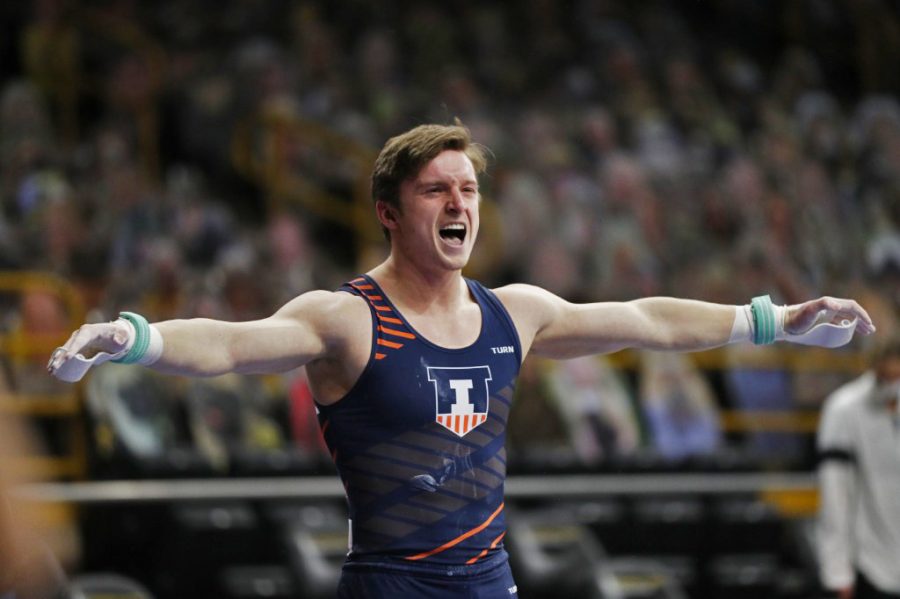 Graduate student Danny Graham celebrates after coming off of the rings at a competition against Iowa on Feb. 13. Graham returned to the team after recovering from a broken tibia and has been performing better than ever.

Earlier this month, Danny Graham was named Illinois’ nominee for the Nissen Emery Award, the most prestigious award in college gymnastics. Though Graham wasn’t named a finalist, he is honored just to have been one of the 11 senior male gymnasts in the country to have been nominated.

“There’s a lot of really good guys nominated,” Graham said. “I don’t think I’m the best guy in that group, but just to be associated with the top guys in the nation was really cool.”

There are five seniors on Illinois’ roster eligible to receive the award this year, but head coach Justin Spring explained why he chose Graham as Illinois’ nominee over the others.

“He’s been a great competitor for us on rings and parallel bars all year. It’s something I’m really impressed with,” Spring said. “And I thought his story was incredible.”

Graham is one of two gymnasts from Spring’s 2017 recruiting class to still be on the team, with the other being Tommy Mistretta. Competing as a still rings and parallel bars specialist, Graham competed in eight meets in his first two years on the team. Though he played his part in the meets, he failed to win event titles or be the highest-scoring Illini.

The turning point of Graham’s career came during his junior year, but the turning point had nothing to do with improved performance. In fact, the turning point was Graham not being able to compete at all. After competing in the first two meets of the season, Graham was warming up on still rings before Illinois’ third meet on Jan. 26, 2019. His dismount was “the best it had ever been,” but he landed awkwardly on his right leg.

“I heard a crack, and I was in a lot of pain,” Graham said. “I was trying to fight the pain, but when I went to put pressure on it, I knew right then and there that it was bad.”

An x-ray would confirm the worst: his tibia was essentially snapped in half. His season was over, but because it ended so early, he was able to redshirt the remainder of the year without losing a year of eligibility.

Graham had a massively successful return to competition in the 2020 season. In stark contrast to before the injury, Graham has been a consistent member of Illinois’ still rings and parallel bars lineups. Last season, he competed on those apparatuses in all seven of Illinois’ meets and won event titles in six of them, five on still rings alone. When the season prematurely ended, Graham was ranked No. 1 in the nation on still rings, earning All-American honors.

“I was working very hard to get everything back, and it showed off last year,” Graham said. “Getting all those rings titles was awesome.”

“He charged back his senior year,” Spring said. “That kid came off snapping his tibia in half and was at the top of his game. What an unbelievable comeback story. Had that year finished out, he could’ve been a national champion.”

Despite the one-two punch the injury and the pandemic delivered in consecutive seasons, Graham came back for his fifth and final year and picked up exactly where he left off. In the 2021 season, Graham made the still rings lineup in the anchor position in all six of Illinois’ regular season meets and made parallel bars lineup in three meets. He won four consecutive still rings titles to start the season and, as of publication, is ranked No. 6 in the nation on that apparatus.

2021 brought a less severe setback but still another punch when Graham contracted COVID-19 during the team’s scheduled month-long break from competition. Graham didn’t miss a competition, but the quarantine took its toll. He finished with an uncharacteristic sixth-place finish in the team’s regular season finale against Minnesota.

“Not my best stuff, but it was my first routine in three-and-a-half weeks,” Graham said. “Taking more than three weeks off, that doesn’t help, especially with rings.”

Graham hopes to have his still rings routine back to full strength in time for the Big Ten Championships. If he succeeds in this endeavor, it would be another chapter written in his already impressive comeback story.