Breslin, Hillman, Le reflect on their four years at Illinois 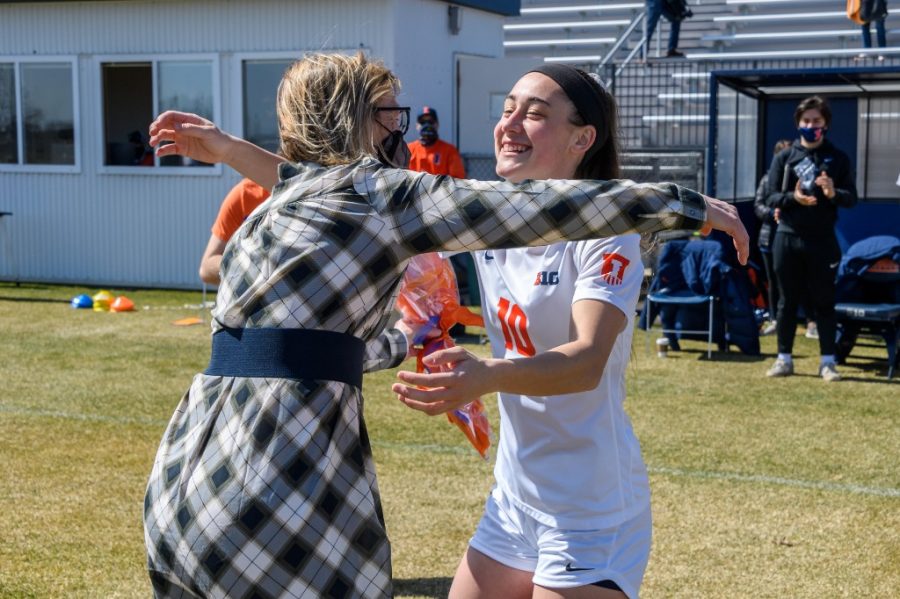 Senior Hope Breslin leans in for a hug with head coach Janet Rayfield during Senior Day on Sunday. The Illini women’s soccer seniors reflect on their growth and experience while playing for the team.

This season for Illinois women’s soccer has been unique for everyone, but especially the class of 2021. The team was set for its 2020 campaign, but the Big Ten canceled fall sports in hopes of delaying the season to spring of 2021.

“I think it was a blessing in disguise,” said senior Hope Breslin. “It definitely gave us a chance as a team to come together more and take any positives away we could from that.”

As it stands, Maggie Hillman is set to come back for a fifth year, as she wants to earn a master’s degree in public health. Breslin is looking at graduate school with hopes of playing professionally or coming back for her fifth year as well. Finally, Katie Le is looking to join a landscape architecture firm back near her hometown by the state capitol, with the intention of getting a master’s degree in energy systems or environmental engineering down the road.

With three more games left in the season and postseason, the seniors have a lot to reflect on. Throughout their four years at Illinois, they have experienced good and bad seasons.

Breslin said the team grew a lot in the four years that she has been on the team.

“I just think that every year honestly has been completely different, and I’m kind of grateful for that, and it makes me happy and excited,” Breslin said. “Every year you’re able to experience something new with a whole new different group of girls. I think each year got better as we learned more about each other, about the team and everything.”

Their first season at Illinois saw the team suffer a losing season, going 5-14 overall and 2-9 in the Big Ten. While it may not be a memorable moment for the class of 2021, they did not put their heads down, rather turned things around in their spring season.

“It was pretty gnarly,” Le said. “Like that spring we had to wear white t-shirts because we needed to repaint our canvas and how we needed to represent the ‘I.’ After that, we kept on getting better and better, and I just feel like we’re at the peak right now with our season and how we’re doing so well so far.”

The 2018 season saw them finish sixth in the Big Ten, improving their overall record to 11-8-1 and conference record to 6-5. That same year, Illinois returned to the Big Ten Tournament, defeating Wisconsin in the quarterfinals, only to lose to Penn State in the semis.

Hillman said the win against Wisconsin meant a lot to the 2018 team, and it was something they worked hard to achieve.
Starting off as a freshman, you are the newest one of the bunch. As you get older you get the veteran status, and as you gain experience and grow, you have to look back at where you started.

“A lot of my growth has to do with confidence, and confident with who I am and who I am becoming especially outside of soccer,” Hillman said. “As a freshman, like I was pretty quiet, pretty timid, and I think Hope (Breslin) and Katie (Le) can attest to this. I am not even close to the same person that I was when I came in.”

Being a part of a program that emphasizes a team culture and bonding to create chemistry on and off the field, there are a lot of memories to take from it. Breslin, Hillman and Le marked moments from their sophomore year as some of their favorites.
The 2018 season saw a lot of action against ranked non-conference teams like North Carolina, Duke and Oklahoma State. Going into those matches as underdogs, Illinois came out on top, winning two of the three matches.

“We beat, at the time, No. 16 Oklahoma State,” Breslin said. “I actually scored one of the goals in that game, which meant a lot to our team just because we did beat a ranked opponent, and it was kind of the fire that started a pretty good season.”

After losing to them the previous year and Breslin dislocating her elbow during the rematch, she was determined to get the goal and win for the Illini.

For Le, her favorite moment was her game-winning goal against Duke during her sophomore year, but she looked at the smaller moments from the team.

As their unique season begins to wind down and with just under two months until the seniors walk across the graduation stage, the feeling of being done and hanging up their boots soon has not hit them yet.

“I was feeling so strongly about it in the summer and fall that I am sticking around,” Hillman said. “I kind of decided that I am not done. I don’t feel like I’ve kind of closed that chapter yet, and I’m really excited to have the opportunity to come back. I’ll have to confront those kinds of feelings one day, but it’s not today.”