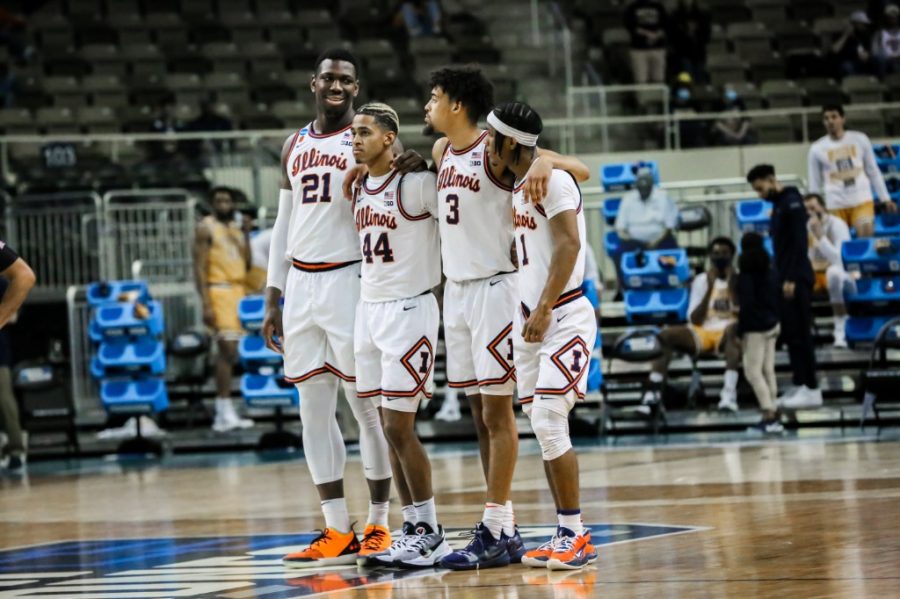 Kofi Cockburn, Adam Miller, Jacob Grandison and Trent Frazier stand side by side during the NCAA tournament first round game against Drexel on Friday. The Illinois men’s basketball team has a chance to improve even more next season if the team plays cleaner basketball with fewer turnovers.

All-American and potential lottery pick? Check. A seven-foot monster who’s a walking double-double? Check. The Big Ten Sixth Man of the Year? Check.
On paper, Brad Underwood’s squad had the goods to become the sixth Illini team to make the Final Four, which makes it so gut-wrenching that a Missouri Valley Conference team with a fraction of the talent was able to send Ayo Dosunmu to prepare for the NBA drat three weeks too early.
“We tried everything in the bag,” said head coach Brad Underwood after the 71-58 loss.
When students stormed the Quad and Green Street after winning the Big Ten Tournament, it was thought more of an appetizer for an April eruption. Now, the season is over. The Sweet 16 drought has been extended another season, and with the departure of Dosunmu, was a Big Ten Tournament victory over Oral Roberts’ first tourney victim the peak of the Brad Underwood era?
No.
March Madness is a blessing and a curse, with the results having an unbalanced impact on a program’s perception. For programs like Syracuse — who are constantly on the bubble — a nice tournament run bails out mediocre regular seasons, as they can still hang Final Four banners or sell Sweet 16 shirts.
But with an exit like the 1-seeded Illini, it can wipe away the memories of the best record since 2006, a Big Ten championship and a rise to No. 2 in the final Associated Press top 25 poll. Sister Jean and company robbed Dosunmu of being able to fill his preseason goal of winning a national championship.
“I can take whatever may come; I can take it,” Dosunmu said after the early exit. “I’ve been through it all. It’s another bump in the road.”
While Dosunmu is off to secure a big payday, his statement is a symbol of the Illini’s trajectory as a Big Ten powerhouse.
The NCAA tournament was brutal. The Illini have no excuse for why they were outplayed and outcoached. Illinois’ failure to guard back-door cuts or help Dosunmu and Kofi Cockburn during double teams is inexcusable. But losing to the Ramblers doesn’t wipe away Andre Curbelo and Adam Miller returning next season, the improved recruiting and Underwood’s style of play.
If given the chance to face Oklahoma or Wisconsin in the Round of 32, Illinois would probably be staying in an Indianapolis hotel for another week. Even if Illinois had to play Alabama in the second round, I would feel better about the chances. But, of course, the Illini were forced to play a fundamental, disciplined under-seeded team that has a great shot at another Final Four appearance.
A team like Loyola Chicago is Brad Underwood’s kryptonite, but Sunday’s result can serve as a measuring stick for the program to take the next stride as a true national brand.
Before Underwood took over the program, the Illini were in the midst of a four-year tournament drought, and recruiting dried up. Games weren’t sold out, and the Illini were regulars in the National Invitation Tournament. But even when Underwood had control, his first two seasons were not productive, with back-to-back losing seasons.
Yes, Dosunmu is gone next year, but the Illini were fine without him this season, going 3-0 without him late in the year. While Dosunmu will surely have his number honored in the rafters, the program truly didn’t take off until Cockburn entered the picture.
Miller will finally be able to take over as a primary scorer, and Curbelo will have another year under his belt to guide the offense. If Cockburn returns for a junior year, he will have the capability of winning the Naismith while becoming a modern-day Shaquille O’Neal.
The bigger question for Illinois is whether it can eliminate sloppy play and begin to play a full 40 minutes, which has kept Illinois from winning back-to-back Big Ten regular season titles.
Two seasons ago, digging a 20-point hole against Michigan State kept them a game short of first place. This season, despite surviving overtime with Nebraska and overcoming a 15-point hole against Penn State, missing 15 free throws against the Spartans was too much to overcome, allowing Tom Izzo to walk away with a 81-72 victory.
For a team with so much talent, they sure loved to play with fire. Unfortunately for the Illini, Porter Moser’s squad preys on teams like Illinois. It didn’t matter that Cockburn finally made his free throws or Miller started making shots. Seventeen turnovers and going down nine right away ended Illinois’ dream season.
The future is bright for the Illini. Luke Goode is coming in next season, Nimari Burnett may return to his home state and the Illini will likely have a top-five preseason ranking if Cockburn returns. For the Illini, the talent is there. The confidence is there. The Illini truly are some fine-tuning away from being a national threat.
Dosunmu was a trailblazer that woke up a starving basketball fan base. Now, it’s up to Curbelo and Miller to take over and finish what Ayo was able to start.