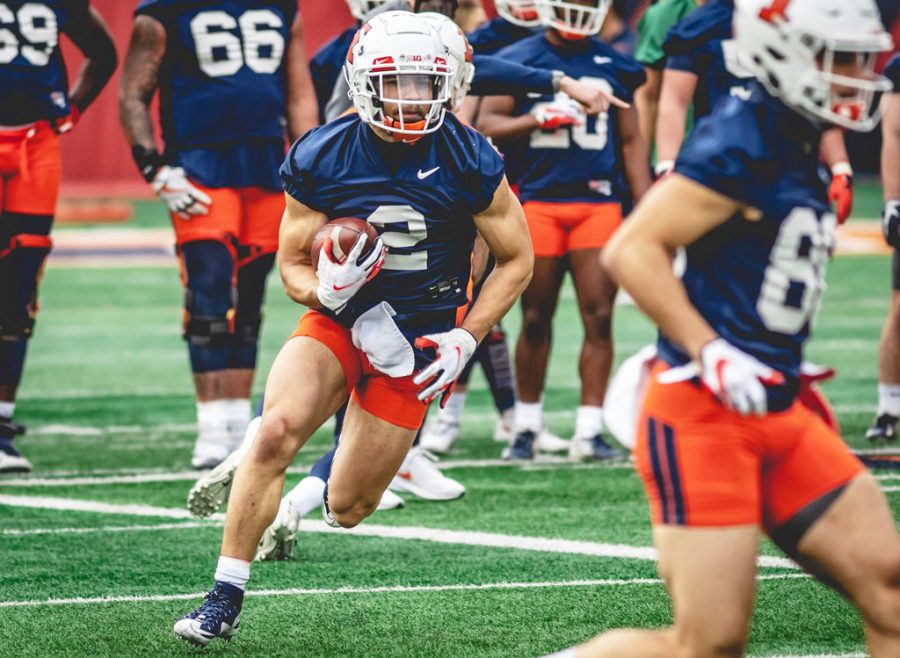 Junior Chase Brown completes a drill during the University of Illinois’s first football practice on Tuesday. New head coach Bret Bielema has been making changes to the Illini’s offense and defense after taking over for former head coach Lovie Smith in December.

Tuesday morning, the Illinois football team started spring football and practiced for the first time under new head coach Bret Bielema, and an almost entirely new staff. With the new staff, though, comes a very different look on the field.
Though today was the first official day of practice this year, the players knew ahead of time that things would look different than they did the previous year, or the previous five years for that matter, under Lovie Smith.
“Obviously, we’ve got the new staff, and that adds to the excitement,” said fifth-year senior Doug Kramer. “That adds to the anticipation you’ve had the past eight weeks, just having those meetings and getting ready for it. Now it’s here and time to put in the work.”
With a new coaching staff comes inevitable changes, and for the Illini that will start with players changing positions. Defensively, senior Owen Carney, redshirt sophomore Seth Coleman and fifth-year senior Isaiah Gay all moved to outside linebacker from the defensive line, an unfamiliar spot for the trio.
New defensive coordinator Ryan Walters said the change will take some work to get used to, but the players are excited that the change will be better for the defense as a whole.
“Just the way we structure the defense, those guys will be playing outside linebacker,” Walters said. “Those guys are having fun with it; it’s obviously different techniques, different scheme a little bit, so I’m excited to see the byproduct of their work.”
As Walters alluded to, the Illinois defense will be running a different defensive scheme than they had been with Lovie as defensive coordinator. Lovie ran the “Tampa 2,” a scheme the Illini won’t be seeing again any time soon.
Walters also won’t be sticking to just one type of defense. He has coached multiple defensive styles in the past and plans to run whichever will best benefit the team depending on the situation.
“Defenses are always reacting to what an offense does, so offenses are becoming a lot more multiple,” Walters said. “Now you kind of see the natural progression where defenses have to be multiple … If we’re a ‘4-3,’ or a ‘4-2-5’ or a ‘3-4,’ I think the goal is to be all three of those at any given moment in time.”
On the other side of the ball, the offense will not see as many major position changes. However, there is a neck-and-neck quarterback race that is set to continue throughout spring ball.
Fifth-year senior Brandon Peters and redshirt sophomore Isaiah Williams each started multiple games for the Illini last year, with Peters typically starting when healthy. However, Williams got the nod over Peters to end the season, which sets up a tight race moving forward and an eventual decision for offensive coordinator Tony Petersen and the staff.
“I’ve got two guys that really played a lot last year between (Brandon Peters) and Isaiah, and I’m excited to see both of them out there,” Petersen said. “Brandon, I mean he’s got God-given NFL type of talent. six-foot-4, he’s 220 pounds, he can run well, has got a strong arm and a quick release … (Isaiah) is a short quarterback, he can throw it, very athletic, probably one of the more athletic guys on our team, can run … Both of those guys have the ability to run the system easily.”
Like the defense, the offense will also be running a different scheme under Petersen than they did under previous offensive coordinator Rod Smith. No matter who wins the quarterback race, the system will be adjusted and the players will have to learn.
Petersen understands that a change on offense can be difficult for the players, but he has complimented the team on the way they’ve been adjusting. He said they have done all he’s asked for up to this point, and the whole offense is setting itself up for success.
“They’ve showed up every day with a notebook and a pen in hand, taking notes and have been extremely attentive,” Petersen said. “They’ve been great in meetings, very attentive. It’s a great group of guys.”
As spring ball starts up, things will look different, but Bielema’s staff seems as prepared as ever for the challenge. They know it’ll take a while to adjust, but they have faith in both their abilities, as well as the players, to properly adjust and set themselves up for a successful season.
“We’re gonna make mistakes; this is our first time together,” Walters said. “That’s really what I’m really looking for with those guys is communicating confidently and playing extremely hard … Mistakes will be made, just go play hard, and we’ll correct it in the film room.”