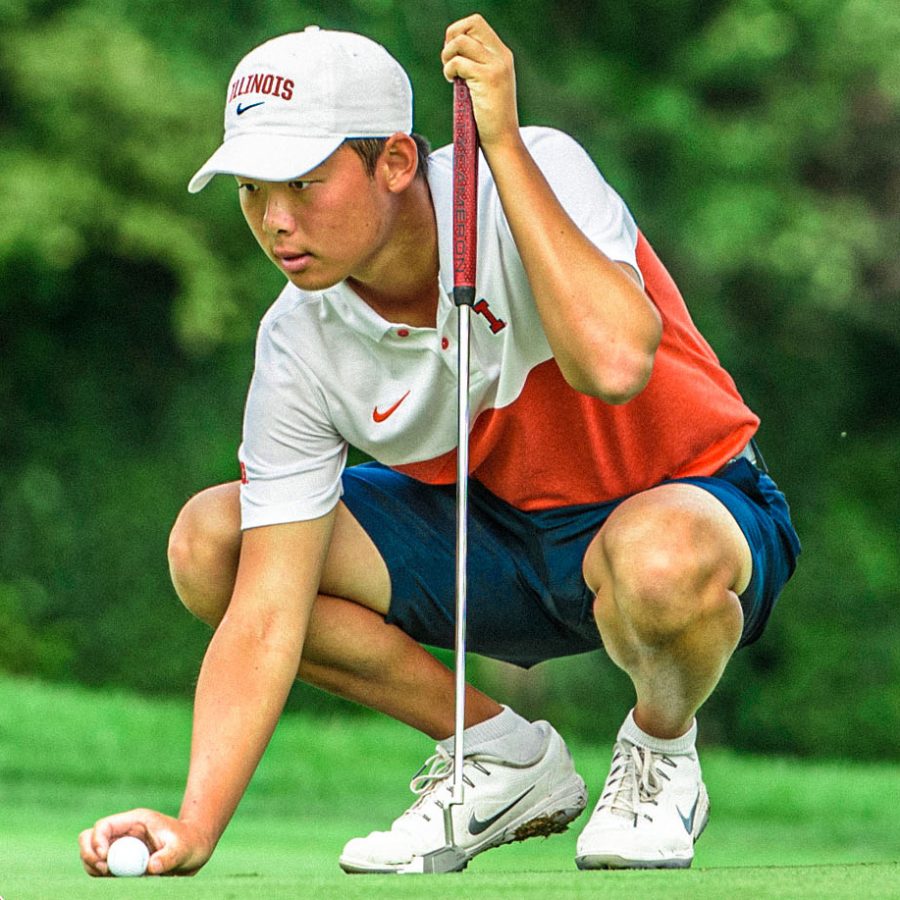 Sophomore Jerry Ji squats down to observe his putting options during a match. Ji was recently named Illini of the Week after winning the Louisiana Classics in Lafayette, Louisiana, on March 16.

When the dust settled at Oakbourne Country Club in Lafayette, Louisiana last Tuesday, Jerry Ji stood alone as the victor.
The Illinois men’s golf team had just blown away the field, four Illini held spots in the top five and another placed seventh. For Ji, this win was special, as it was his first.
“Obviously the first one is the hardest one,” Ji said. “I think I’m just happy that I won and that I contributed to the team. It means a lot to help the Illini golf family.”
Ji is not one to boast about his own performance. He was more focused on the fact that the team got another win, making it three straight. But Ji’s performance was in fact noteworthy.
More than that, it was historic. For his performance, Ji was named Big Ten Golfer of the Week.
Ji led the tournament with 18 birdies and played his last 22 holes bogey-free. Ji’s score of 203 (-13) is a personal record, but more importantly, it is the lowest score in the Louisiana Classics’ 36-year history, matching the record set by Illinois alum Thomas Detry.
This is not the first time Ji has been compared to Detry.
Both hail from northern Europe, where they had immense success as amateurs, and they both won Big Ten Freshman of the year honors in their respective freshmen seasons.
Ji was born and raised in Hoofddorp, Netherlands and has known about Detry for a long time. When Ji was in high school, Detry and his fellow Belgian Illini teammate Thomas Pieters helped put Illinois on the map in Europe.
“In Europe, Illinois is a really big school,” Ji said. “Obviously I knew Adrien (Dumont de Chassart) and Gio (Tadiotto), but also Thomas Pieters and Detry, too. I heard a lot of great things about the program.”
Ji’s time at Illinois has been complicated, but grabbing your first win before the end of your sophomore year is not common.
Both Pieters and Detry got their first collegiate wins in their sophomore seasons. Current Haskins Award finalist Michael Feagles did not record his first collegiate win until his junior season.
Technically Ji’s first win came in his sophomore year, but so far, he has played 30 collegiate rounds of golf. Most collegiate golfers play around 35 rounds in a year. This means that in terms of rounds played, Ji has the experience level of a freshman.
When Thomas Detry set the record Ji just tied, he was a junior at Illinois and had nearly 80 rounds of collegiate golf under his belt. Ji has just 30.
It’s been a long road for Ji. The reigning Big Ten Freshman of the Year first started playing golf when he was nine and a friend invited him to play at their local course in Hoofddorp.
Before he committed to golf, he was a tennis player, but he quit tennis at age 14 when he realized he liked golf more, despite it being an unpopular sport among the Dutch.
“Golf is not a very big sport in the Netherlands,” Ji said. “Because we like soccer and field hockey.”
It may be a bit excessive to compare Ji to two current PGA European Tour golfers, but this is not the first time Ji has tied a record. In his first-ever collegiate round back in 2019, Ji tied the Illinois record for the lowest individual round score with a 63 (-7) at the Maui Jim Intercollegiate.
Ji has certainly shown that he has the talent to compete with anyone. Despite his inconsistency, his career trajectory remains high. If Ji continues to improve at his current pace, he will likely inspire more European golf prospects to come to Illinois, as Detry and Pieters did before him.