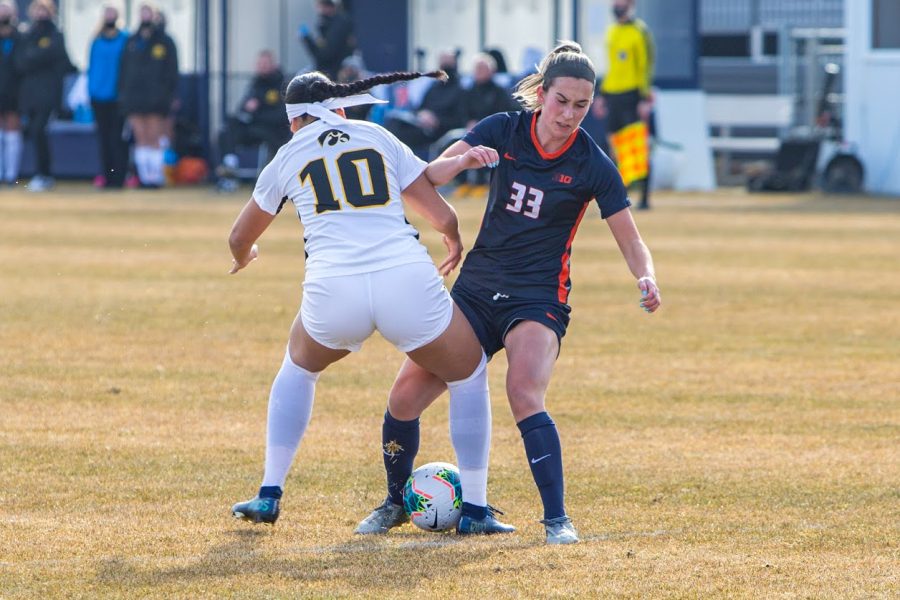 Ashley Cathro fights over the ball in order to retain possession over Iowa on Feb. 26. The team will continue to fight for a spot in the Big Ten Championship.

The Illinois offense has been on fire for the last couple of games but were unable to edge past Michigan who took the win on their home field 2-0.

Wolverines put the pressure on the Illini real quick, outmuscling their defense and quickly moving the ball around.

One of Michigan’s early chances on goal almost saw them put it into the net. A cross into the middle of the box to Nicki Hernandez’s head was just shy of the side netting and hit the post.

Two minutes after that chance, Hernandez got another go. This time receiving the ball in midfield and pushing it past defender Lauren Stibich for a shot on goal rolling past goalkeeper Sami Sample into the bottom right corner.

Another Wolverine chance came in the 21st minute after a pass to Danielle Wolfe led to a powerful shot on goal. The ball hit the back of the net but was called offsides keeping Michigan at bay with one goal.

Michigan’s last chance of the first half came in the 37th minute after an Illinois freekick. On the quick turnaround, the Wolverines took three passes to get to Sammi Woods in the box, who just put it over the crossbar.

In the second half, Eileen Murphy started it off for Illinois after a shot from distance pushed Michigan goalkeeper Hillary Beall to make a save.

To get the equalizer against the Wolverines, Hope Breslin took control of the offense and ball whenever she had it. Her skill to dance past defenders allowed her left boot to fire a rocket on goal.

Another chance from Breslin made Beall give up a corner and the Illini tried a short pass to Kendra Pasquale in hopes of recreating her goal against Ohio State.

Michigan’s next goal came in the 80th minute after Skylar Anderson took the shot on her left foot, possibly deflecting off a defender to ram off the post into the goal sealing the victory.

Despite taking 14 shots and seven on goal, Illinois were missing the final ingredient once again to get a goal: finishing.

Although scoring in their last three games, Illinois failed to get one in the net this time around.

The Illini’s record falls to 4-4-1, giving up their fourth place spot in the Big Ten conference to Northwestern and dropping to seventh.

There are only two more regular season games left with the Big Ten Tournament coming up soon. Only four teams are advancing to the tournament, and the fight for those four spots is heating up.

Illinois will continue on the road in their game on Sunday against Michigan State.