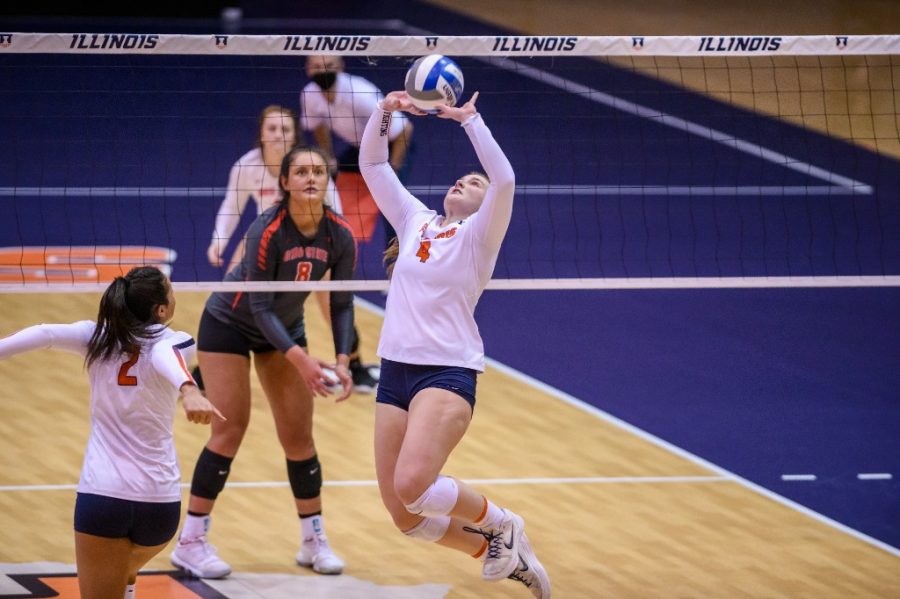 Senior Kylie Bruder sets the ball for Rylee Hinton during a game against Ohio State on Feb. 19. The Fighting Illini women’s volleyball team will host their last home meet against Indiana while honoring their seniors this weekend.

After breaking their arduous 10-match losing streak last weekend with a pair of wins over Maryland, Illinois will have a chance to extend a winning streak against Indiana at Huff Hall on Friday at 7 p.m. and Saturday at 8 p.m. These matches will be Illinois’ final home matches of the season.

The Illini will honor their seniors — Kylie Bruder, Emily Hollowell and Megan Cooney — this weekend, along with Mica Allison, who will be graduating a year early and pursuing beach volleyball. Though this season hasn’t brought any fans, each of the graduating players has seen court time and played a role on this year’s team.

Now on the opposite side of the losing streak, both the players and head coach Chris Tamas have praised the positive mentality and work ethic of the team despite the losses.

“You always want to win —to see that (win) number go up— but you don’t always get to control that,” Tamas said. “It’s been quite a grueling schedule just to go straight into the Big Ten with some inexperienced pieces. It’s been trial by fire this year, and it is what it is. We’re happy to compete. The tough part in that whole run — we had five consecutive weeks with teams in the top 12 —we were really close in a lot of matches. We were to the point where we were literally two points away from turning a lot of sets. If you turn those sets, who knows what happens in the match.

“We had a couple five-setters in there, too, so I’m proud overall of how we’ve been competing, and it was really nice to see a couple wins this weekend, especially with a Maryland team which was playing pretty well over the last couple weeks. Glad the team got to breathe a little bit easier after that weekend.”

In Illinois’ breakthrough last weekend, freshman Raina Terry put up yet another slate of career-highs. She logged a career-high eight service aces last Friday, the second most in Illinois history, and a career-high 23 kills on Saturday. She has continuously set new career-bests in kills this season, but last weekend’s may prove difficult to top, as she did it on an absurd 61 attempts.

Terry’s high usage came in part as a result of Cooney being out last weekend. It’s unclear whether Cooney will be on the court this weekend, but if she isn’t then Terry may see another weekend of high attempts.

As far as matchup goes, Indiana is 3-13 on the season and had last week off after its matchup against Northwestern was postponed due to COVID-19 concerns. While the Hoosiers had no All-Americans last year, they do have a couple threats in hitters Breana Edwards and Tommi Stockham, who are averaging 2.76 and 3.16 kills per set, respectively.

Though the schedule is finally letting up in terms of opponents, the team has remained hungry and motivated.

“I think just not letting up in practice (and) keeping the energy high,” Bruder said. “Just not taking our foot off the gas. I know Maryland and Indiana aren’t ranked like the other teams we’ve been playing this season, but that doesn’t mean they’re any lesser. Any team in the Big Ten is super talented, so just keep getting after it in practice and just keep competing every day.”