Big Ten has big problems: Why league struggles in March, how teams can get over hurdle 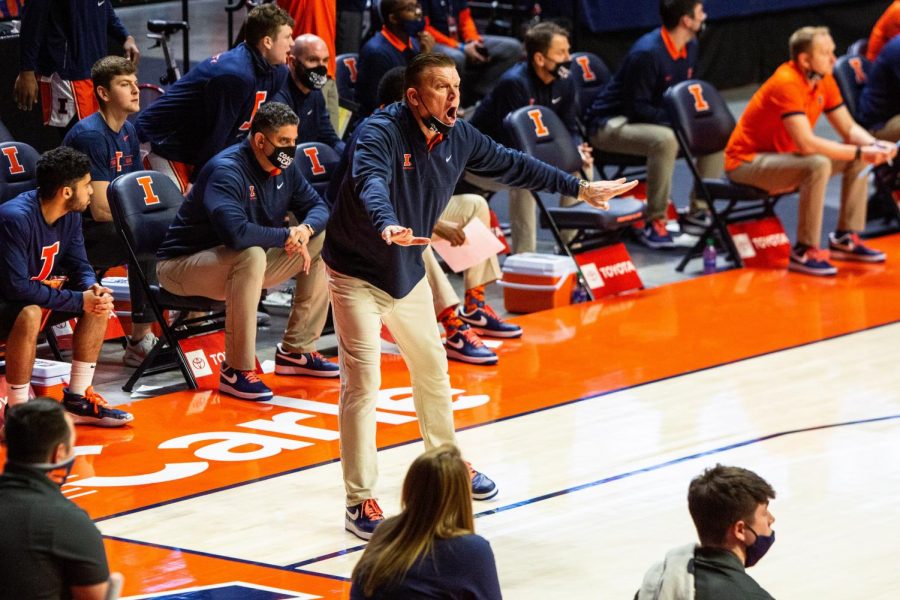 Brad Underwood yells during the game against Iowa on Jan. 29 at State Farm Center. The Big Ten has been widely considered the best conference in the country all season, yet Michigan is the only Big Ten team to advance to the Sweet 16 in the NCAA tournament.

The Sweet 16 and Elite 8 are starting this weekend, and to the surprise of some, the “mighty” Big Ten has just one team alive: Michigan.

After a regular season where the league was dubbed as “the best ever” by advanced KenPom metrics and consistently had teams in the Associated Press top ten, Big Ten teams fell flat on their faces in the opening weekend of the NCAA tournament. In the first round, No. 2 Ohio State lost to No. 15 Oral Roberts and No. 4 Purdue fell to No. 13 North Texas, which then proceeded to get trounced by Villanova. No. 1 Illinois was the first 1-seed to fall, falling by 13 to 8-seed Loyola Chicago. No. 2 seed Iowa got walloped by No. 7 Oregon. Michigan can maybe make some noise, but that seems highly unlikely without Isaiah Livers.

Assuming the Wolverines don’t win the title, that’ll make it 21 straight seasons that the Big Ten has gone without winning a championship. This is a problem for a league that prides itself on basketball success, and it needs to change.

The center of this deep-rooted issue is stagnation in recruiting. Winning with just freshmen is a daunting task, but you need some talent to win. From 2018 to 2020, the Big Ten landed just two five-star recruits. In that same stretch, the Big Ten also snagged 18 top 50 players. The Pac-12 got 24 in that period, while the Southeastern Conference nearly doubled the Big Ten with 33.

Why can't the Big Ten get over the hump in March? It's a loaded question with lots of reasons, but it starts with recruiting. Other conferences are lapping the Big Ten in getting top guys, both out of high school and in the transfer portal. pic.twitter.com/3sqguCUwXk

With the transfer portal becoming more frequently used, that’s also an area the Big Ten has fallen behind in. The teams still playing this weekend are loaded with transfers; Arkansas starts three, Oregon starts three, three of Baylor’s top five scorers are transfers and Houston’s leading scorer is a transfer. Again, winning with just transfers is not plausible, but recruiting the portal is a necessity.

The coaches in the league are good, so that begs the question: Why don’t big-time players want to play in the Big Ten? It starts with the style of play. The Big Ten is too old school. No Big Ten teams rank in the top 60 in possessions per game, and just three programs rank in the top ten. Meanwhile, Sweet 16 teams Alabama, Arkansas and Gonzaga are all top 20.

The league is too big-man dominated, with coaches unwilling to adapt to the modern game. Of the last 15 All-Big Ten First Team members, just four of those players have been guards, while 11 are front-court players. Since 2010, only Anthony Davis-led Kentucky and Jahlil Okafor-led Duke won a title with a big as its best player, and those guys were both top three picks in the NBA draft.

Years ago, teams could get away with post-centric offenses, but in today’s game, offenses with multiple ball handlers and spacing are needed on offense to win. Only three Big Ten teams rank in the top 100 in 3-pointers taken. The conference games are also notorious for tons of whistles. Guards who want to make it to the next level want to play with spacing and better game flow.

The old-school big man is also problematic on defense. Against these more dynamic offenses, those bigs got exposed. Loyola Chicago ran all actions through its center and at Kofi Cockburn. Luka Garza looked lost against Oregon’s more athletic bigs. Even Hunter Dickinson had a hard time keeping up with Louisiana State University.

This is a personnel issue, but it also stems from the coaching staff. The Atlantic Coast Conference wins titles because they have elite coaches like Mike Krzyzewski, Tony Bennett and Roy Williams. But the SEC has seen a stark coaching change for the better. Eric Musselman and Nate Oats have lifted their respective programs with their style of play and ability to recruit. Will Wade has a knack for landing talent, and John Calipari still looms large at Kentucky.

The coaches in the Big Ten won’t go anywhere; Matt Painter and Chris Holtmann have done fantastic jobs with their programs, but it feels like their ceilings are tapped. Gone are John Beilein and Bo Ryan —  the last two Big Ten coaches to reach a title game —  and while Tom Izzo has a knack for getting the most out of his players, he hasn’t been able to get over the top due to a lack of talent.

Who can save the Big Ten? It’s likely Juwan Howard. Howard isn’t running his program like Izzo, Holtmann and Painter. Rather, he’s implemented a very modern offense that helped the Wolverines win the Big Ten regular-season title in just his second season after being projected to finish middle of the pack. Their pick-and-roll rate this season was on par with the likes of Gonzaga and Baylor.

Howard is also getting it done on the recruiting trail and transfer market. Despite narrowly missing on two five-stars last year, he still had the best class in the Big Ten. Transfers Mike Smith and Chaundee Brown are two of the Wolverines’ key guys. Currently, they have the No. 1 class in the country, led by two-five stars and a high four-star. Implement those guys into Howard’s modern scheme, and the rest of the Big Ten is in trouble.

Other coaches will need to adapt to keep up with Howard, but I believe they will. Izzo was the first coach to bring in a lot of size, and the league followed suit. If Howard starts winning his way, other coaches should follow. If they don’t, Michigan will remain supreme.

One coach I didn’t mention was Brad Underwood, who has done things in a more modern way. In year four, he was able to implement a dynamic three-guard offense with multiple ball handlers. He’s landed big-name recruits like Ayo Dosunmu and Kofi Cockburn, and has been active in the transfer market. The 2021 class didn’t go as planned, but he took swings for big-time players, and that’ll pay off in the long run. It’s no surprise the coaches that run their teams the way basketball is played in this era finished one and two in the conference.

As they stand today, the Big Ten won’t complete the title drought with the way the majority of teams play. Holtmann, Izzo and Painter can take average talent and make them better with designed sets and concepts, but talent and the ability to adapt are why they’ve fallen short, and this postseason debacle was the biggest example. As someone who lives in Big Ten country, I hope this served as a wake-up call.