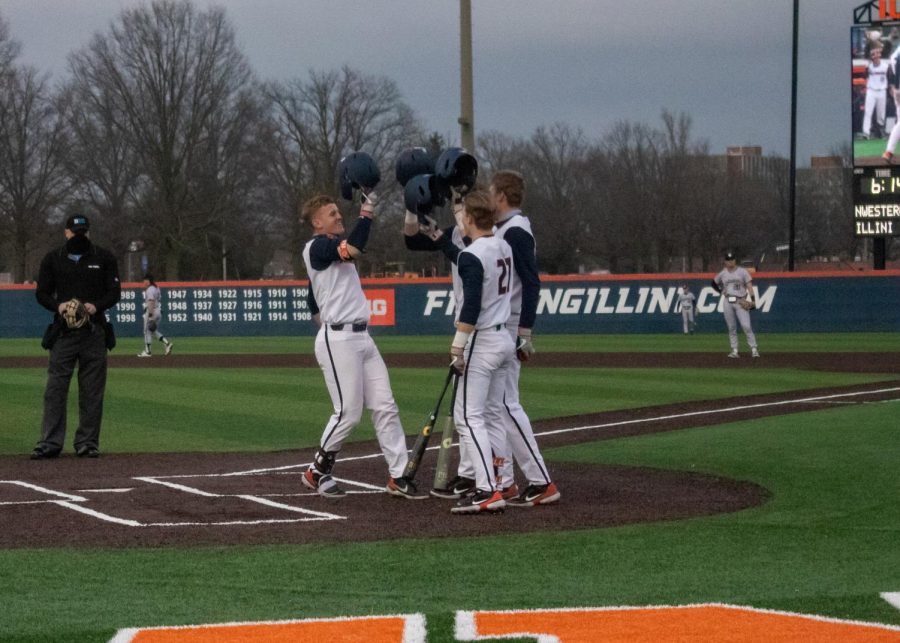 Jackson Raper celebrates with teammates at home plate after hitting a home run against Northwestern Friday at Illinois Field. The Illini beat the Wildcats 12-8 Friday but ultimately lost the series 2-1.

The Big Ten’s top two hitting teams squared off in Champaign this weekend for a three game series. Illinois (7-8), who played its first home series of the season, took game one on Friday, but Northwestern (9-5) pulled away with the series by winning on Saturday and Sunday.

With the wind blowing all weekend and several of the conference’s top hitters competing, each game was a showdown at the plate. The teams combined for 23 home runs in the series; Northwestern now totals 29 on the season, while Illinois has 12.

The Illini’s offense kept up with the Wildcats early in the weekend, limiting the pressure put on the pitching staff. But as the bats inevitably slowed down, Northwestern exposed Illinois’ biggest weakness: depth in the bullpen.

“They have to get better each and every week, both mentally and physically,” said head coach Dan Hartleb. “If they can’t step up and make some strides after a weekend like this, then they need to maybe look at other options. This is one of those things where you have a gut check, and it forces you to get better and the great athletes get better. I expect a great week of practice and I expect guys will come next week and perform at a much higher rate.”

Illinois’ pitching staff gave up 36 runs on 47 hits throughout the weekend as 14 different Illini pitchers saw action through the 27 innings played.

Shawn Goosenberg and Anthony Calarco powered the Wildcats’ efficient offense, recording nine and seven hits, respectively. Goosenberg was the driving force in Sunday’s 12-5 win for Northwestern, going 4-for-5 on two two-run homers and two doubles. Calarco led the Wildcats in Saturday’s 16-14 win, going 4-for-6 on three home runs and a double while driving in five runs.

“I thought they were very comfortable at the plate,” Hartleb said. “They swung the bats extremely well again. They’ve got some power, so they can hurt you with one swing. When you have somebody that’s very comfortable at the plate, there’s some things you have to do. You have to be able to pitch inside and be ahead of the count. We just didn’t do a very good job of that.”

While the back half of the weekend fell in Northwestern’s favor, Illinois’ Friday outing was a strong representation of its high-powered offensive abilities. Smart baserunning put the Illini up 2-0 early, but the Wildcats countered with a five-run fourth inning led by a series of RBI singles.

A home run from Cameron McDonald in the fourth and an RBI single from Justin Janas in the sixth combined with a couple shutout innings from Lavender shrunk Northwestern’s lead to just 5-4 heading into the seventh inning.

Then, the Illini bats got hot. Singles from Branden Comia and Janas early in the seventh scored three runs, before a patient at-bat out of McDonald resulted in a walk and another run. With the bases loaded, Kellen Sarver lined out deep into right field, allowing another run to come across. Jackson Raper extended Illinois’ new lead even further, with a three-run shot to right field.

Northwestern tacked on three more runs in the ninth inning, courtesy of another home run, but Illinois held on for the 12-8 victory.

The Wildcats came out firing on Saturday, scoring six unanswered runs through four innings; however, it took just one inning for the Illini to even things up. In the bottom of the fourth, singles from Janas and McDonald set up another three-run homer from Raper. After Jacob Campbell and Taylor Jackson both hit singles, Comia scored both runners on a single and a Wildcats’ throwing error. Comia then scored the tying run on a wild pitch.

Both teams traded home runs before Northwestern put up a three-run seventh inning to grab a 12-8 lead. Illinois quickly fired back with three seventh inning runs, before gaining a 13-12 lead off homers from Comia and Ryan Hampe in the eighth.

The Wildcats weren’t done as Calarco tied things up with a leadoff home run in the ninth. A fielding error by Illinois allowed the lead to be taken as Northwestern came away with the 16-14 win.

Northwestern once again jumped on Illinois right away on Sunday, scoring 10 runs through the first four innings. Despite being one of the Illini’s most consistent pitchers, Cole Kirschsieper struggled against the Wildcats, pitching just 2.2 innings while giving up six runs.

“We pitched well on Friday and did a good job offensively, didn’t make any errors,” Hartleb said. “(Saturday) we make a crucial error and don’t overcome it and we lose when we had a chance to win, even when the pitching wasn’t good. Basically, you don’t win because of a defensive play. Then, some poor pitching today, we just didn’t pitch very well. And we had some opportunities to make some other plays. We just weren’t sharp. We need to play complete games.”