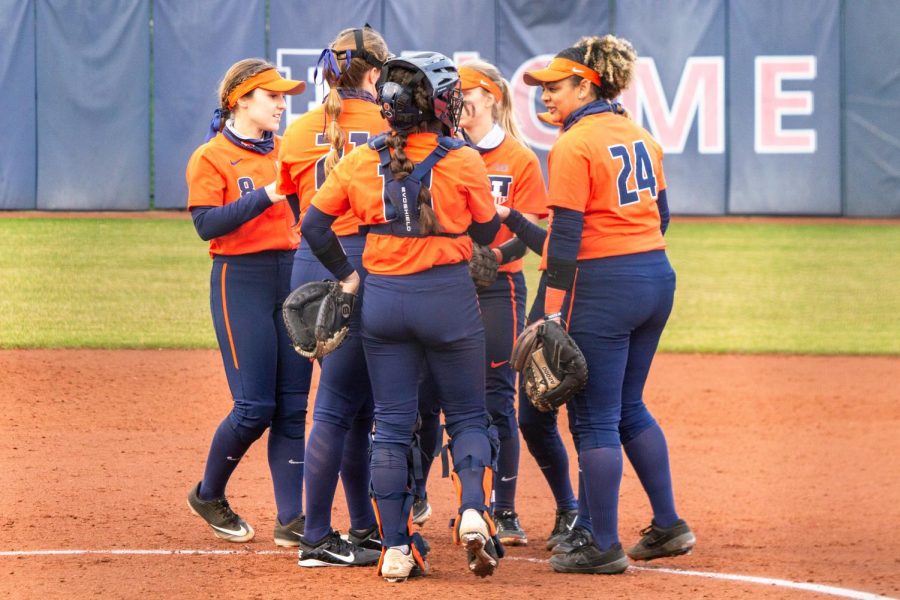 The Illinois women’s softball team huddles up during a game against Minnesota on friday. The team lost their first three games against minnesota, but powered through and won 8-0 on Sunday.

Illinois’ bats heated up during the last game of the four-game series after taking three tough losses against Minnesota. Illinois ended its first series at Eichelberger Field with a home record of 1-3, contributing to their overall record of 11-5 and fielding percentage of .688.

On Sunday afternoon, the Illini’s pitching and defense didn’t give the Golden Gophers a chance to score a run. Junior Sydney Sickels dominated the pitching circle once again, pitching five scoreless innings while allowing only two hits and striking out eight.

Illinois defeated Minnesota 8-0 in only five innings. The team’s offense commanded the game with driving hits, while junior Kailee Powell, sophomores Gabi Robles and Kelly Ryono and freshman Jaelyn Vickery all had two-hit games for Illinois.

Though Illinois only won one of the four games against Minnesota, it continued to persist and strove to play as the high-energy team it knows it truly is.

“We weren’t playing to our full potential, and we finally came together during this last game,” said senior Bella Loya. “The first few we definitely didn’t show who Illinois softball is.”

Saturday afternoon, the Illini took a pair of tough losses — 5-1 in game one and 9-5 in game two — against Minnesota during their doubleheader. Even through the two defeats, the team’s dynamic hitting continued to progress, including three home runs during game two. Powell hit her second home run of the year, a two-run shot to center field. Loya contributed to the home run action, hitting a two-run home run to left field.

On Friday evening, Illinois took their toughest loss of the season so far, 6-0. Powell led the Illini at the plate, going 2-for-3 with a double. Sickels pitched five innings, allowing five runs on eight hits while striking out three. Sophomore Morgan Scivally finished the last two innings, striking out two while allowing one earned run on two hits.

Along with their outstanding performances, Loya, in conjunction with her teammates, prides the team on having created this unique and special bond like no other in the conference. This unity helps keep Illinois’ heads high, knowing there will be defeats; yet, with every defeat comes a victory.

Illinois strives to continue to play with uplifting and motivating energy, as it heads into another four-game series against Wisconsin this upcoming weekend.

“Moving forward, we know that we are such a good team and a very special team this year,” Loya said. “Knowing that when we bring our game, we can beat anybody that we want. We just have to make sure we show up and we bring the energy and show everyone what we’re made of.”