Illinois prevails in pair of wins over Indiana 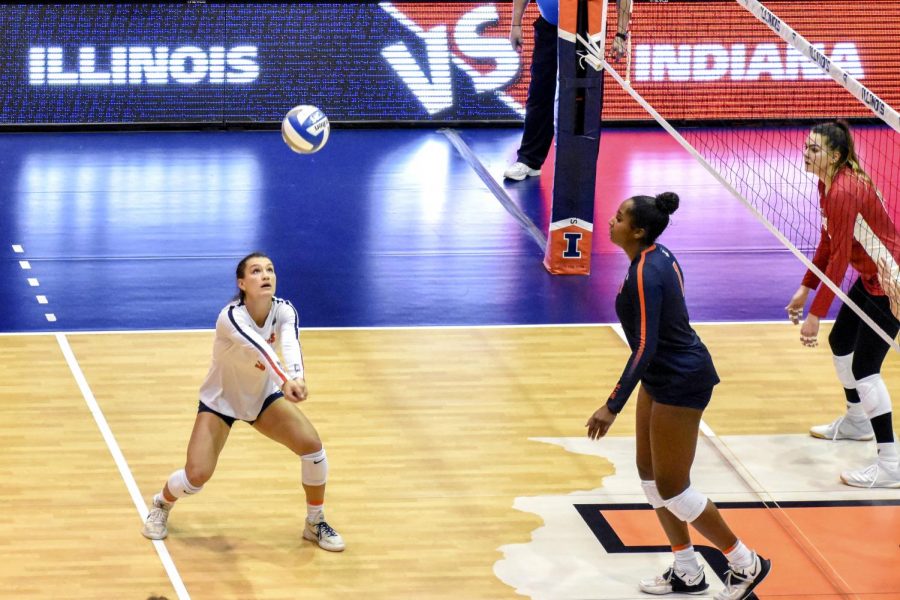 Junior Taylor Kuper bumps a volleyball during a game against Indiana Saturday at Huff Hall. The Illinois women’s volleyball team ended one of their longest losing streaks with two wins against the Hoosiers this weekend.

After enduring the longest losing streak in head coach Chris Tamas’ tenure, the Illini have finally gotten themselves back on track. This weekend, they had their most dominant outing of the season, prevailing over Indiana 3-0 and 3-1 on Friday and Saturday, respectively.

This weekend capped off Illinois’ home schedule for the season, so all of the graduating players — Megan Cooney, Mica Allison, Kylie Bruder and Emily Hollowell — were honored, along with volunteer technical assistant Ryan Anton. For the first time all year, family members were also allowed into the stands this weekend.

“It was a little shy of 50 people, but it felt like 500,” Tamas said. “Just good to have the energy in the gym, and I know we can’t be meeting with our parents and families quite yet, but I think the players enjoyed seeing their parents from a distance. It’s good to have them in the stands.”

The Iliini had a balanced effort throughout the weekend, but a few standout performers were sophomores Diana Brown and Rylee Hinton, along with freshman Raina Terry. Brown stuffed the stat sheet both days, putting up 32 assists, 10 digs, three kills and three total blocks on Friday. Hinton put up a career-high 10 blocks on Saturday, while Terry put up 11 and nine kills on Friday and Saturday, respectively.

“I’ve known Raina for a really long time, probably since she was 12,” Brown said. “She played with my cousin, and we were in the same club, so just to see her progress from when she was 12 years old to now as one of my go-to hitters — it’s crazy. It’s quite incredible to play next to her and to think that she’s only a freshman is scary. I’m excited for her journey here, and I’m just really honestly proud that I get to play with her. Really glad that she works with me every single day.”

Now that the season is nearing its close, the Illini have spent a lot of time reflecting on their ups and downs. While this year will undoubtedly be characterized by the 10-match losing streak, this team was never going to come out looking like the 2018 Final Four squad. This season featured a variety of new starting lineups and rotations, so it might take until next year to see if all the work and losing pays dividends.

“I honestly can’t put into words how it feels to go 0-10, but then we took a step back, and we realized that we played (the) number one, four, five, nine and 10th (ranked teams) all in a row,” Brown said. “Looking at that, we just kind of tried to get any and all positive feedback from those games. We were right there in many of the sets. That’s really great, but going into these past two weeks, we were honest with each other. We said we want to make the best out of these last few weeks, so I’m just really proud of everyone. We have gone into practice each and every day and have given it our all. We’ve had some of our best practices.”

What’s been most impressive about Illinois the past couple weeks is likely its mental game. It would have been easy to give up on this season and give subpar efforts the rest of the way, but the team has been increasingly engaged the past couple weeks from top to bottom. For their efforts, the Illini now get the chance to flip the script and end their season on a six-match winning streak next week.

“Obviously we’re not going to mail it in,” Tamas said. “We wouldn’t be the Fighting Illini if we did. I think for us, it’s more about having the mentality that we’re young this year and (where we weren’t) young, we were inexperienced in the positions that we were in. We were playing different roles for the returners. Any time we do that, you’ve just got to figure out what lineup works best. Had some injuries thrown our way, and we were able to take every single week as an opportunity to grow and learn. Whenever you’re able to do that, you’re going to just see improvement as the year goes on. Good to see tonight again and just really great team effort.”