Illinois needs finishing in front of goal to break streak 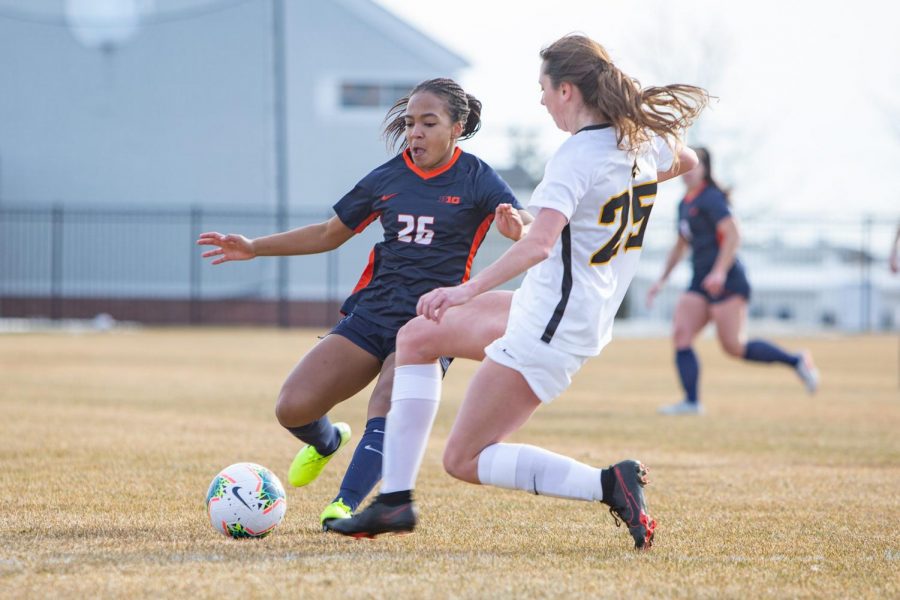 Sophomore Summer Garrison fights to keep possession of the ball in their game against Iowa on Feb. 26. The Illinois women’s soccer team will play against the Spartans of Michigan State at 4PM CT today.

While two losses in a row are bad on paper, Illinois just struggled to finish its chances and be the better team. On Sunday in East Lansing, the Illini (4-4-1) have a chance to put them back on a winning streak against the Spartans (1-6-1).

Though Illinois is on a two game losing streak, Michigan State is in an even worse state at six losses in a row. The Spartans’ low four points in the Big Ten Conference table comes from their first two games against Maryland and Nebraska. A tie against the Cornhuskers earned them a point, while the 2-0 win over the Terrapins got them a full three points.

However, Maryland has yet to win a game this entire season, while Nebraska are just two points ahead of Michigan State in the table.

When Illinois faced Michigan Thursday, they battled a team that had an all-around strong squad. The Wolverines sent many players forward to have a full and heavy attack on the Illini defense, which struggled to handle this wave of attack at times.

Michigan attacked with numbers, but Michigan State’s style of attacking is not the same.

“They (Michigan State) probably won’t send the same kind of numbers forward in their attack, but they are really dangerous when they do get forward,” said head coach Janet Rayfield.

Regardless of how they are doing this season, the Spartans have scored eight goals, while the Illini have scored nine.

There might not be a consistent goalscorer(s) for the Spartans, but both Gia Wahlberg and Zivana Labovic have two goals apiece this season. Despite the stats, the Illini defense is still going to have to hold their ground and close off any chances the Spartans have.

“They don’t need a lot of chances,” Rayfield said. “We’re going to have to limit their chances and be disciplined defensively in order to limit them from scoring.”

As for goalkeeper Sami Sample, the corners of her goal have been kryptonite for her. After having a stellar start for the Illini and earning multiple shutouts, she has been getting beat on shots that aim for the bottom corners.

One of Wahlberg’s goals this season was a low drive into the bottom left corner against Maryland, so Sample will have to watch for a shot like that from her former high school teammate.

For Illinois to come away with a win from this game, it will need to be clinical in its finishing. While the Illini have had many shots on goal against Michigan and Ohio State, they failed to convert their shots into the net, which has been a reason as to why they are on a losing streak.

The Illini will require a full team effort from the players on the field, as well as the bench’s energy and words of encouragement, to keep the team going.

Kickoff will be at 4 p.m. central time, and the game can be streamed on Big Ten Network.