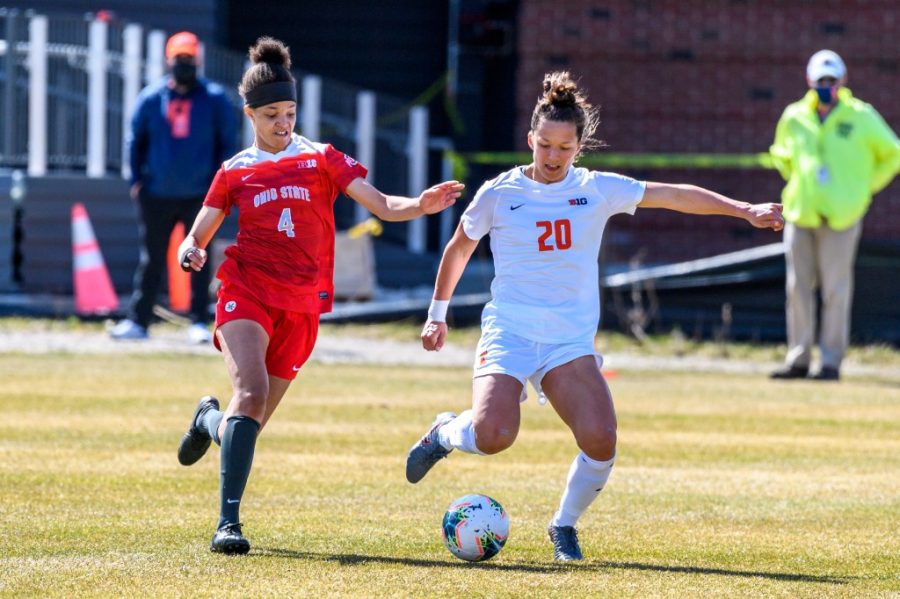 Junior Makena Silber dribbles the ball past an Ohio State defenseman on March 21. Silber scored the winning goal during a game against Michigan State in East Lansing today.

After a tough game in East Lansing, Illinois grabbed the win over Michigan State 2-1 after a game winning goal from Makena Silber.

Although the Spartans suffered many setbacks and losses this season, it didn’t allow them to hold back from their game.

The Illinois offense struggled to get forward and into the box majority of the game only taking a mere three shots in total.

“It was really difficult to play through them, and you’re kind of caught trying to play over them and that’s not something we’re really good at,” said head coach Janet Rayfield. “We had to grind one and be gritty today as opposed to being the technical team where we can move the ball up the field.”

While possession in the defensive half worked for Illinois, moving the ball up the field into the offensive third just didn’t work. The block Michigan State had in their midfield was a huge reason as to why Illinois were deadlocked going forward.

Kendra Pasquale, who has been a stand out player for the Illini this season struggled to use her speed and quick feet to get past the Spartans.

“Kendra hadn’t really gotten the ball in a good spot to take on and get inline, which is something that we wanted her to do and just really didn’t get the ball out to her as often as we wanted to,” Rayfield said.

On the other side of the field, the Illinois defense were in full control of the game. Keeping the possession and stopping any dangerous shots on goal was the theme for the backline late Sunday afternoon.

“Our defense did a really good job dropping and limiting the threats from their counter attack players number 10 Camryn Evans and Gia Wahlberg have been dominant in the Big Ten in terms of getting goals off counterattacks,” Rayfield said.

Illinois’ best chance of the first half came from a corner in the 40th minute of play. A ball sent in by Aleah Treiterer found the head of Eileen Murphy for the second time this season, who towered over her defender sending a powerful header towards goal. A Michigan State player was on the goalkeeper line hoping to get the goal line save but failed and ended up heading it into her own goal.

In the second half, it was a possession heavy game for the Illini. With only one goal standing between them and the Spartans, they wanted to keep their lead and clean sheet.

The 79th minute saw a free kick awarded to Michigan State with Samantha White looking to serve it into the box. Off the restart, the ball found its way to Zivana Labovic in the box, who headed it into the ground to bounce past Sample.

In the 84th minute, Illinois found their response to Michigan State. Pasquale, who struggled to break through into the offensive third had a rare opportunity and used her pace down her natural left side to go towards goal.

Nearly at the end line, she sent a powerful cross across goal and found the feet of Makena Silber, who took a one-time shot into the back of the net, sealing her third game winning goal of the season.

“When the goal went in, we didn’t put our heads down and allow something to happen,” Rayfield said. “We went right back at them and fought the game, said there’s time left and I think we finally got into the attacking half with numbers.”

Rayfield said that the exact play that led to the game winning goal is what the team have been working on in practice. With Summer Garrison and Silber as the forwards, they both made runs into the box.

Garrison made the run to the near post drawing her defender away and allowing the cross to travel across the box for Silber to come in and get on the end of it at the back post.

“Those are the kind of goals that you call team goals,” Rayfield said. “Everybody had a role to play in that, somebody at the near post who never touched it was an important piece of that goal. So great team goal to get that win today.”

Illinois last game of the regular season will be against Northwestern in Evanston for an Illinois showdown.