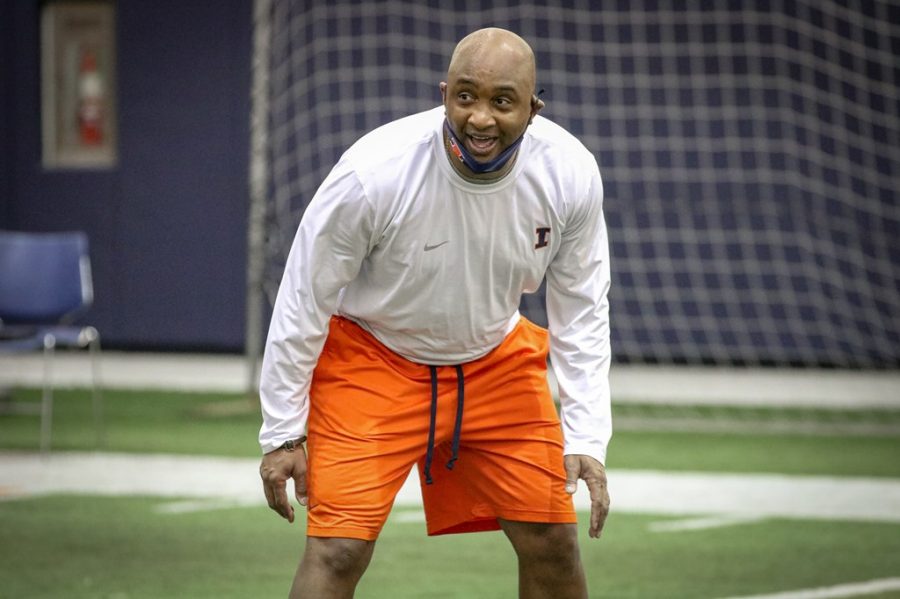 Assistant head Coach and wide receivers coach George McDonald prepares players at a lifting and conditioning practice for Illini football on Tuesday. Though McDonald may be a new coach, he brings hope for a better team in the future.

When Illinois football took the field at Memorial Stadium Tuesday for its first spring practice, emotions were high. New coaches walked onto the grass with a whistle in hand for the first time, while players began to prepare for a new start with Bret Bielema at the helm. Nerves and excitement were flowing, especially for Illini wide receivers coach and Illinois football alum George McDonald.
Now employed under Bielema, McDonald played four years as a wide receiver for the Illini back in the late 1990s. The look and feel of Memorial Stadium was nothing new, but waking up at 3:30 a.m., eager to begin teaching a group of mostly inexperienced receivers, was a nearly indescribable feeling.
“It was a rush of emotions that were kind of odd because I never really felt it,” McDonald said. “You have flashbacks of just moments on the field and experiences on the field. It was special.”
While Tuesday’s practice was filled with excitement of a fresh start for the program, McDonald admits the day was pretty tough for the receiver room, which lost more battles with the defensive backs than they won.
McDonald inherited a younger group of receivers with little experience in game situations. With Josh Imatorbhebhe heading to the National Footbal League draft and Casey Washington transferring to Wake Forest, Donny Navarro and Brian Hightower will look to step up as McDonald’s top guys.
Navarro started playing consistent snaps late in the 2019 season, which carried over to last season, combining for 35 catches, 433 yards and three touchdowns over the last two years. Hightower, who transferred from Miami before the 2020 season, recorded 11 catches, 209 yards and three touchdowns in his first season as an Illini.
When McDonald was asked which players stood out in the early days of practice, he mentioned Navarro and Hightower, but he also brought attention to nearly every receiver in his group, including Carlos Sandy, Khmari Thompson, Dalevon Campbell, Kyron Cumby and Ty Lindenman. While Imatorbhebhe was the clear star the past two seasons, with the majority of passes from Brandon Peters thrown his way, McDonald wants to focus on spreading the ball around more.
“The more we can play as a collective group, the better we’re going to be,” McDonald said. “I don’t think we need to have one superstar receiver. We just have to have guys who can catch the ball, create separation and continue to move the chains for us. As we continue to develop, those big plays and explosive plays are going to come. Coach Petersen calls really good plays; we’ve got really good running backs with coach Patterson. So, it’s just a collective group of a team playing Illinois football and Illinois offense and not worrying about who’s getting the credit for it.”
While McDonald has put an emphasis on the group as a whole, one Illini stuck out to him during workouts: kicker Caleb Griffin. Recruited for the special teams unit, Griffin spent a majority of games behind James McCourt the past two seasons, but he was able to get some reps as a punt returner near the end of the 2020 season.
But without knowing much about Griffin, McDonald noticed the junior was beating out most of the guys in morning conditioning stations, and with Griffin’s long athletic frame, McDonald began to envision him as an outside receiver.
After some encouragement from chief of staff Mark Taurisani, McDonald brought the idea up to Bielema, who gave the approval.
“(Griffin) has done a nice job,” McDonald said. “He’s a blank slate. He’s always coming in early in the morning trying to learn the plays, learn the skills, learn the technique. But he’s a natural athlete so I’ve been excited working with him. … My expectation is for him to score some touchdowns for us.”
While the group has a lot of kinks to work out, along with new schemes and logistics to learn, McDonald is trying to take things one day at a time, focusing on the bigger picture.
Immediately after Tuesday’s “rough” practice, McDonald saw some guys back in the facilities, putting in extra work before Thursday’s practice. Those improvements were almost instant, as McDonald saw his crew take a step up on day two, whether it be moving off the line of scrimmage quicker or getting in a better position to make a play.
“We threw a lot at them on Tuesday, and they came back and responded well (Thursday),” McDonald said. “I’ve been excited about the hunger they have to get better and their desire to keep developing and pushing themselves forward.
“It’s just daily development. We’re just trying to get better every day and continue to grow them. You’ve got to start somewhere. I really don’t worry about the game reps; I just worry about the preparation. We’re excited to get going.”